You are here: Home / Electronics / What is an Open Collector : Configuration, Working & Advantages

In the digital chip design, microcontroller applications and operational amplifiers, the open collector outputs are commonly used either for driving high loads such as relays or for interfacing with other circuits. As we know that BJT is a transistor and it has three terminals (Emitter, Base and Collector) where these terminals can be configured mainly in three switching modes. Those are Common Base, Common Collector and Common Emitter modes. Today, we are going to discuss about open collector configuration, its TTL gate, characteristics and advantages.

What is an Open Collector?

Open Collector is the general output where one can find in various integrated circuits. The open collector configuration operates like a switch which is either ground connected or disconnected. Other than connecting the output of an IC or any other transistor to specific device, it is connected to the NPN transistor’s base terminal where the collector is open and emitter terminal of the NPN transistor has internal connection with the ground pin.

The circuit can offer either current sinking or current sourcing output based on the type of transistor (NPN or PNP).

The below picture is the open collector circuit using an NPN transistor. 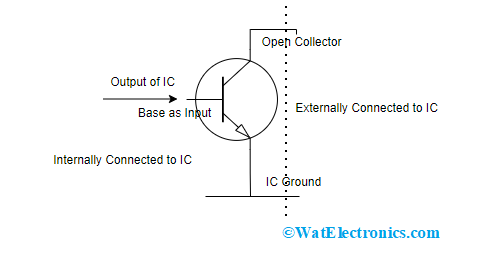 This section explains how does an open-collector work along with the circuit explanation. The  switching circuit is mainly helpful for switching applications and for driving electromechanical kind of appliances. The PNP/NPN transistor’s base terminal can be either connected to analog or digital circuit and the emitter terminal has connection with ground. Whereas the collector terminal has connection with the switching load.

In the case of NPN transistor, when the base terminal is supplied with a control signal, the transistor moves to ON state. As the output is at collector terminal, the output gets pulled to ground through the conducting transistor junctions by energizing the load and making it ON. So, the transistor modifies and passes the load current which can be known through Ohm’s law where

Whereas when the NPN transistor’s base drive is in OFF condition, then the load will not get conducted and gets turned OFF. Then the transistor’s output helps in regulation of external load where the current-sink switching functionality of the transistor operates either as short circuit or open circuit. 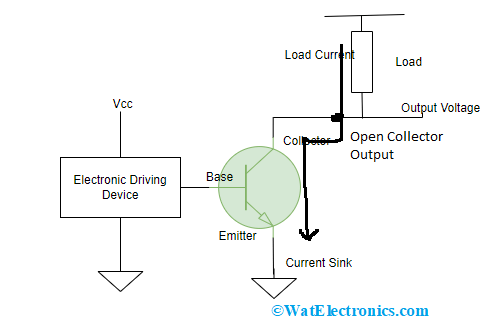 The benefit in the open-collector transistor configuration is no necessity of connecting the collector load voltage to be at the same level of voltage potential of transistor’s driving circuit where it can be either high or low.

The below tabular column specifies the differences between open drain and open collector configurations.

When transistor Tc is removed from totem-pole configuration, then an open collector TTL gate is formed. A TTL NAND gate can be transformed into AND gate by using a pull-up resistor in between the output terminals P and Q in the below picture. 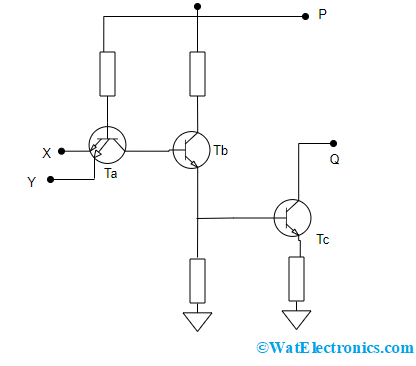 Using an open collector logic gate, wired AND and wired OR gates can be developed. In the below figure, multiple AND gates are ANDed with the help of open-collector TTL gate which shows the result as wired AND. This is because AND is produced by ANDing all the outputs which can be expressed as follows:

When all the NAND gates collector terminals are shorted for the output transistors, this performs ANDing operation. Through this wired OR connection can also be obtained through DeMorgan’s principle and the equation is

In the below figure the pull-up resistor value is known by the maximum value of current that flows across the collector terminal allowed via every output transistor. 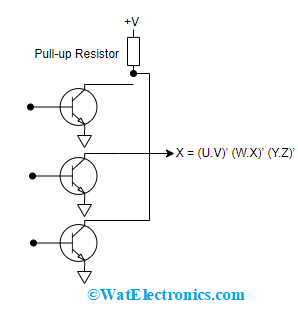 When any device which is connected at output , the output device should be connected to the positive voltage source that should be able to drive the load.

For example: When the output device is 12 V DC motor, then the output should have connection to +12V. Then, the load’s negative and ground terminals are connected to output of the device which drives the motor.

When a 12V DC motor has to be connected to LM311 chip, then the configuration is shown as follows: 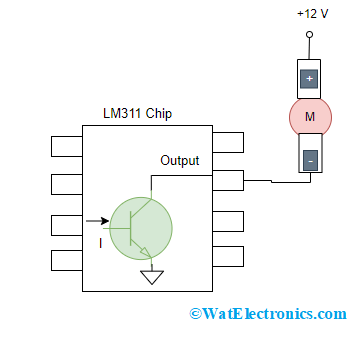 This is all about the concept of open collector. The article has provided information on open collector configuration, working, TTL gate, advantages and drawbacks. Know open collector characteristics and how does those show impact on functionality of the device?