You are here: Home / Electronics / What is Open Drain : Configuration & Its Applications

In order to have interference with the outside world using microcontrollers, it can be done through pins. These pins act as physical points for an integrated circuit where a PCB connection can be established. Each pin has its own circuitry, and it is configured to pins to allow interference with various kinds of circuits. And the most important point is to select the appropriate pin configuration in the design of an embedded system. Today, this article explains open-drain output configuration, how it is configured, its applications, and its advantages.

What is an Open Drain?

It is also called Open Collector which is a transistor having a connection with the ground pin. In a simple way, it behaves like a switch that gets connected or disconnected depending on the input signal. This open-drain configuration permits different devices to establish communication bi-directionally on one wire. This is generally considered as a mode where it provides only pull-down functionality. This is the basic open-drain definition.

In most of the integrated circuits, the observed output configuration type is open-drain. As a replacement for outputting a signal with a corresponding current or voltage, the output is fed to the base terminal of the NPN transistor, and the collector terminal is externally connected to the integrated circuit pin. The emitter terminal has an internal connection with the grounded pin. When the output circuit is in MOSFET configuration, then it is termed as open drain circuit and it operates in the same way. 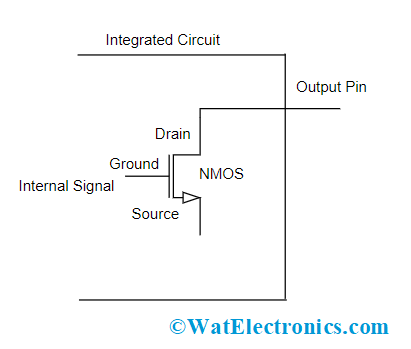 In the working of open collector devices, they allow current flow either in the logic ‘0’ low voltage active state or logic ‘1’ high voltage non-active (high impedance) state. The open-collector devices generally function using an external pull-up resistor which allows the signal line to be in high phase up,  so that to the device connected on the wire flows enough amount of current in order to pull the line to low and to the signal the start of a communication.

In the open drain working, the signal wire also functions in bi-directional which corresponds that the device can have both input/output signals on the wire at the same period of time. Along with the regulation of the pins state, which is connected to the signal wire, it can also recognize the level of voltage of the wire.

The open-drain configuration is employed at the controller’s output port in order to lessen the output circuitry. When the output port is fixed at open-collector/drain state, then there is no additional equipment necessary for pulling down the pin’s output value.

In order to employ analog input pin as high-impedance input and a comparator is enabled state, then that pin has to be in the configuration of open collector and the related register bit has to be in ‘1’ state.

In both of the scenarios, the point to be noted is that the open drain/collector is a part of the output transistor which is directly connected out to a pin that is on the external side of the integrated circuit.

The below picture represents the open drain configuration.

In digital sensing applications, the crucial part is to select the suitable output configuration where the main options are open collector, push-pull and push-up. To know these configurations, let us know a few terms which are explained below:

Floating Pin – A pin is considered to be in a floating state when it is not connected to any other pins and also it is not led by any circuit in the IC. The voltage level of the floating pin is unclear and cannot be predicted. Also, when a high impedance pin is not led either by pull-up or pull-down circuits, then it is also called a floating pin.

High Impedance – A pin that has a high impedance essentially takes out its impact on the electrical circuit to which it is connected. It is usually not driven actively and is in a floating state except it is connected to any other external device.

The open drain advantages and disadvantages in comparison with push-pull configuration are:

In order to know the pull-up concept, let us understand output possibilities in an open-collector configuration.

In order to make this configuration applicable in real-world scenarios, either an external or internal pull-up resistor has to be used. These days, all the microcontrollers are provided with a pull-up resistor for the output pin.

The applications of open drain include the following.

What is open-drain used for?

Open collector/drain presents high impedance either high or low voltage is applied to the gate terminal.

What is open drain and wired or?

The open-drain technique is used to establish communication between multiple devices bi-directionally on a single wire.

When the device does not use a bus, then the output of the open collector is in high impedance.

What is an open-drain transistor?

Open drain transistor represents that the output pin is led by only one transistor where it pulls the pin to only one voltage level usually to the ground.

Does open-drain need pull up?

Open-drain configuration requires a pull-up resistor so that the output will be properly at high.

What is an open-drain buffer?

The open collector/drain buffer is 74LVC1G07 IC with open-drain output. This buffer when connected with other open-collector outputs is suitable for the application of active low (wired-OR) or wired-AND functions.

Please refer to this link to know more about Analog Electronics MCQs.

So, this is all about the concept of the open drive. This article has clearly focused on explaining what is open-drain configuration, its comparison with push-pull and pull-up configurations, circuits, and applications. Also, know how an open-drain output configuration is used in driving LEDs?