You are here: Home / Digital Electronics / What is NAND Gate : Working & Its Applications

We all know that logic gate is the idealized computational approach for the implementation of a Boolean function which is either performed on a single or more number of inputs thus generating single output. As per this context, the term can be referred to as an ideal logic gate or non-ideal physical device. These logic gates are basically designed using transistors, relay logics, diodes, and many other mechanical elements. The very fundamental type of logic gates is AND, OR, and NOT gates. Along with these, we have NAND gate and NOR gates which are termed Universal Logic Gates.

Charles Peirce demonstrated that either NOR or NAND logic gates are enough to reproduce the operation of other logic gates, but his demonstration was left unpublished till 1933. Then, the initial proof of publication happened in 1913 by Henry M. Sheffer and the functionality of NAND is termed as Sheffer stroke. And today, this article focuses on explaining NAND gate definition, circuit, truth table, its applications, and advantages.

What is NAND Gate?

The NAND gate Boolean expression is given by:

Here, X and Y are the inputs and A is the output. NAND logic gate can be achieved by multiplying all the inputs and then complementing the multiplied result.

The NAND gate symbol is shown as follows: 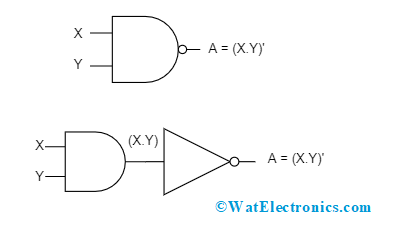 Basic NOT AND Gate

There are basically three types of NAND logic gates depending on the number of inputs. Those are explained below:

Here, the gate accepts two inputs and gives single output which is the basic formation of NAND gate. Here, the total possible combinations of inputs are 4. The 2-input NAND gate truth table is shown below:

Here, the gate accepts three inputs and gives single output. Here, the total possible combinations of inputs are 8. This three-input logic gate can be formed by combining any number of individual inputs The 3-input NAND logic gate truth table and logical design is shown below:

Similar to multi-input OR and AND gates, an n-input NAND logic gate can also be formed. When the number of inputs is odd, the unused input signal is kept high by connecting this unused signal to the power supply through pull-up resistors.

Multi Input NOT AND

Below is the logical expression and NAND gate design for 4-input NAND. 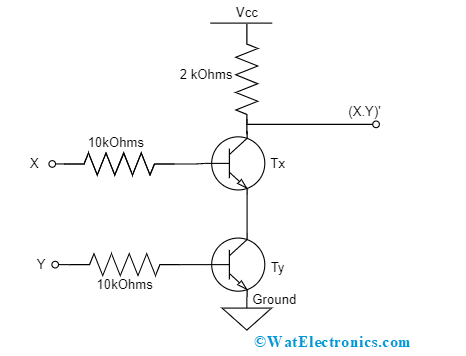 Then the emitter end of Ty is connected to the ground and this completes the circuit connection. On the other hand, the base ends of both Tx and Ty are connected to inputs X and Y through 10k ohm resistors correspondingly.

To know the exact functionality of the Negated And logic gate using a transistor, we need to analyze all four combinations of inputs.

When both the inputs are LOW, then the two transistors Tx and Ty operating as the switch do not permit for connection between emitter and collector ends. Because of this, when there is a power supply across the circuit, the current will not pass to the emitter end of Tx and it passes only to the collector end of Tx. As the collector end is even connected with LED, this power supply directly reaches to LED and the LED glows making the output as HIGH.

As it is already discussed that NOT AND gate is a universal gate. This makes it more flexible that any basic logic gate can be derived using a NAND gate. The below section explains on NAND gate to derive basic gates.

When the inputs are considered as X and Y, then for an AND gate, the desired output is X.Y. So, this Boolean expression is derived using the Negated And logic gate.

AND Using NOT AND Gate

When the inputs are considered as X and Y, then for an OR gate, the desired output is X + Y. 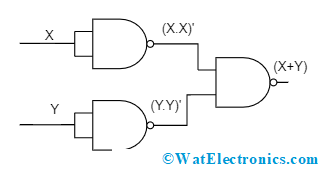 OR Using NOT AND Gate

So, this Boolean expression is derived using NAND logic gate.

When the input is considered as X, then for a NOT gate, the desired output is X’. So, this Boolean expression is derived using the NAND logic gate.

NOT Using NOT AND Gate

The commonly existing ICs of NAND gate are:

In TTL logic we have,

In CMOS logic we have,

This is a two-input NAND gate IC that has 14 pins. The IC consists of 4 independent gates where each gate performs Negated AND logic gate functionality. These gates work on advanced silicon gate CMOS technology to gain higher functional speeds utilizing minimal power and every gate has buffered outputs. The 74LS logic family is in compatibility with the 74HC family in regards to functionality and pin-out. The inputs of every gate in the IC are safeguarded from damage because of static discharge by internally present diode clamps to the power supply and ground. 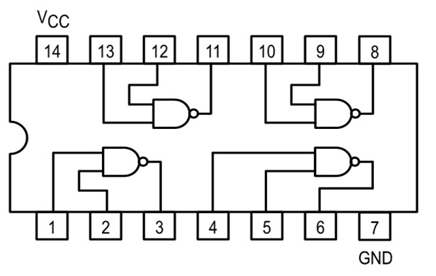 The functional characteristics of 74LS00 are:

The electrical characteristics are:

The switching characteristics of 74LS00 are:

This section explains the VHDL code implementation for a NOT AND logic gate:

architecture NAND1 of NAND Gate is

There are various applications of NAND gate in real life where few of those are explained below:

The NAND gate advantages, disadvantages are as follows:

This is all about an overview of the NAND logic gate. This article has given detailed exposure to the NAND gate truth table, circuit, design, applications, and advantages. Also, know how CMOS logic NAND are constructed and what are their performance characteristics?