You are here: Home / Electronics / What is Avalanche Diode : Working & Its Applications

A semiconductor diode like an avalanche diode is similar to a Zener diode and this diode operates within the region of reverse bias. The symbol of this diode is the same as a Zener because it is one kind of PN junction diode. The designing of this diode can be done in such a way that, it can resist the breakdown of avalanche without damaging when the reverse current suddenly increased because, when the current increases suddenly within the PN junction diode, then it can damage.

What is Avalanche Diode?

A diode that operates in a reverse breakdown region is known as an avalanche diode. These diodes are mainly designed to break at a precise reverse voltage without being damaged. They are applicable in inductive, protective, high voltage circuits once these diodes are connected in series. As compared to a normal diode, an avalanche diode will endure for a long time. So by using these diodes in specific applications, reliability can be improved.

Avalanche breakdown occurs in the materials of both semiconducting & insulating. It is an electric current multiplication form that allows extremely high currents to supply in materials or else good insulators. This kind of breakdown can also occur in solids, liquids otherwise gases once the voltage supply is given beyond the insulating material that is sufficient to speed up free electrons once they hit atoms within the material, and then they can knock other charge carriers.

Avalanche takes place very fast & consequently, these diodes are the best surge-suppression components. In an electric system, an avalanche diode is used like a valve to control & protect the system from a surplus voltage or pressure.

So, this voltage is called when the reverse bias voltage is applied where the breakdown takes place at the PN junction. So the diode allows the flow of current in this condition. As compared to a PN junction diode, this type of diode also includes two layers namely P-layer & N-layer. In P-layer, the majority of charge carriers are holes whereas in N-layer the majority of charge carriers are electrons. 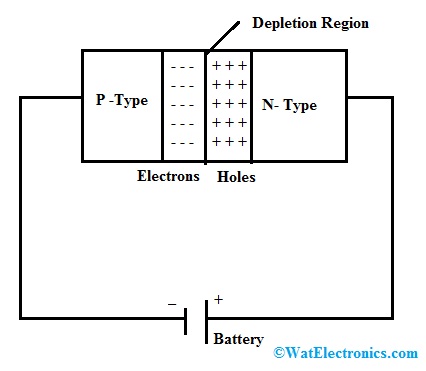 This process is continuous and thus, the number of electrons enhances exponentially. Now, an increase in voltage will increase electric current suddenly. This will damage the depletion area. So an avalanche breakdown will occur.

The specifications of the avalanche diode will determine the diode’s functionality.

The forward voltage is the specified voltage across the terminals of the diode that outcomes from the current flow within the forward way. 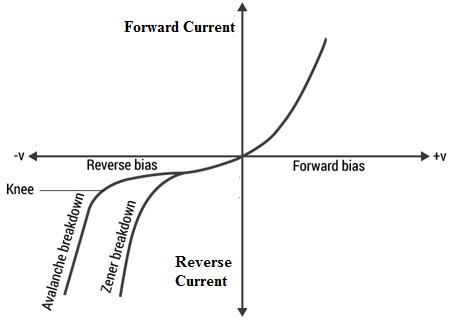 The VI characteristics are nothing but the difference of current for the voltage applied to the diode. The above graph demonstrates the mixed characteristics of the Zener & Avalanche breakdown. It is observed that both breakdowns will occur once a diode is connected in a reverse bias state.

The advantages of avalanche diode include the following.

The disadvantages of avalanche diode include the following.

The applications of avalanche diode include the following.

What is Avalanche Breakdown Voltage?

But, Zener Breakdown mainly takes place because of the covalent bonds breaking through the tough electric field beyond the PN-junction. The power rating in the Zener breakdown is not enhanced.
If we connect a resistor in series with a diode then the breakdown of the avalanche will be reversible.

Please refer to this link to know more about Clippers and Clampers & Diode Approximation.

Thus, this is all about an overview of an Avalanche diode and the main function of this diode is to break down at an exact high breakdown voltage. These kinds of diodes are mainly used for electronic device protection from excess voltages. These diodes utilize a fixed voltage to begin the effect of avalanche rather than permitting the voltage to cause harm to the diode. This diode gives the necessary protection for the devices to function continuously. Here is a question for you, what is the Zener effect?