You are here: Home / Electronics / What are Clippers and Clampers & Their Working

There are many electronic circuits that are used for signal transmission. It can be an amplifier or modulator or it might be anything related to the signal strength enhancement. These devices are known for accepting the signal at a certain defined range of voltages.  If the signal applied has an amplitude value greater than that of the range described this results in distortion or it may destroy the components present in the circuit.  There is another problem related to signals that are their levels. The circuit levels are always maintained on the positive side. But the sinusoidal waves and the audio signals consist of both positive as well as negative cycles. Then in such cases, the levels of the signals must be shifted then operated on the electronic circuitry. For this processing of comprising the signals to defined ranges and signal levels, the clippers and clampers are used.

What are Clippers and Clampers?

Clippers and clampers can be defined as clippers that are used to protect the electronic circuits by applying the AC input signals to the described voltage range. It will remove either the positive half or the negative or both the positive and the negative halves of the AC by considering the requirement of the defined voltage range. Without any alteration, the shape of the applied signal in any electronic circuit, the DC level can be shifted as desired by the clamper circuits. This is done by using a capacitor in the circuits. So clippers and clampers play an essential role in electronic circuits.

A clipper circuitry consists of linear elements known as resistors and non-linear elements such as diodes. But it doesn’t consist of any energy storage device such as a capacitor. One of the best examples of the clipper is a half-wave rectifier. In this, either the positive or negative half of the AC cycle is allowed to pass through the circuit.

These clippers are often limiting the voltages, currents, and amplitudes. Further, these are commonly referred to as slicers.

Types of Clippers and Clampers

The different types of clippers and clampers are discussed below.

Further, these series type clippers are categorized as positive as well as negative clippers.

The positive cycle of the signal is clipped in the type of clipper. This circuit consists of a diode-connected in such a way that the arrow is pointing towards the input. It is connected along with series to the output load. The resistor is considered as load.

In this type of circuit, the diode should be connected to the load in a parallel manner. The principle of operating is the opposite of the series clippers.

This type of clipper allows the applied input signal to pass to the load when the diode remains to reverse biased and the signals are blocked when the diode gets forward biased. 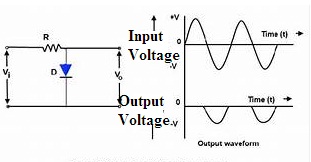 For the positive duration of the cycle, the diode tends to conduct and the output has appeared as the positive value of reference voltage and for the negative cycle, the value of output generated is the same as that of the applied input signal.

The functionality of the circuit is the same but the only difference is a negative voltage of reference is connected in terms of series to the diode.

The clampers are also known as DC Restorers. Basing on the amount that is defined by the voltage source the applied input signal can be shifted.

A clamper circuit consists of an independent voltage source, a resistor, a capacitor, and a diode. The capacitors and the resistors present in the circuit maintains the DC level altered at the output obtained. If the positive component of dc is added to the input signal then the signal gets pushed towards the positive side. similarly, if the negative component of dc is added the signal gets shifted towards the negative side.

Clamper circuits are of three types. They are positive, negative, and biased clampers.

A positive clamper has the source of voltage, resistor, capacitor, and a diode-connected parallel with the load. If the diode follows the reverse biasing mode the applied input signal is passed on to the load otherwise the signal gets blocked if the diode remains in forward biasing mode. In the positive clampers for the positive duration of the cycle, the connected diode is reverse biased and for the negative duration of the cycle, the connected diode will be forward biased. 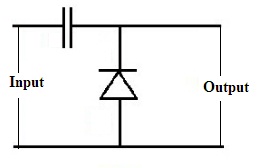 The circuit of negative clampers is arranged in such a way that for the positive duration of the cycle the polarity of the diode makes it to be in forward biased and for the negative duration, it will be reverse-biased so that the signal can appear at the output.

Applications of Clippers and Clampers

The applications of clippers are:

The applications of clampers are:

Please refer to this link to know more about Clamper Circuit MCQs.

Thus, this is all about an overview of clippers and clampers circuits. These circuits are used to shape the signals into desired forms. These circuits are simple in terms of design by using basic diodes. A clipping circuit consists of a diode followed by a resistor whereas an additional component called a capacitor is present in clampers. Can you describe the other way of construction of clippers and clampers other than diodes?