You are here: Home / Basics / What is an P-type Semiconductor?

Semiconductor and its Types

These semiconductors are further classified into two basic types based on their purity and the doping value, For more detailed comparison between the two semiconductor types, refer to the article – Difference Between Intrinsic and Extrinsic Semiconductor

Once the impurity is added to the semiconductor then its purity gets affected and also there is the increment in the charge carriers. These types of semiconductors are known as extrinsic semiconductors. Further, this is classified into two types’ p-type and n-type. In these types, the numbers of electrons are more in n-type whereas the number of holes in p-type.

What is a P-Type Semiconductor?

In order to form a p-type semiconductor the basic step is to dope intrinsic semiconductor with trivalent impurity. In this type, the valence shell consists of three electrons requires further one more electron.

This is possible by sharing the electron. As it is accepting electrons it is generally referred to as acceptor. The acceptor impurities are Boron, indium, gallium. Once these are added to either silicon or germanium p-type semiconductors are formed.

Let us take boron as the trivalent impurity so that we can add it to the silicon in order to make it extrinsic. Everything here is completely based on the concept of sharing.

The covalent bond concept is preferred during accepting the electrons. Boron atomic number is five. Based on its valence shell electronic configuration concept the numbers of valence electrons present in boron are three.

It is evident that to boron there are four neighbouring silicon atoms as per that there must be four electrons but there are only three valence electrons present. Then the absence of fourth electron or the vacancy of the electron is termed as a hole.

It indicates that one electron is accepted by the boron atom. The vacancy or the need of electron can be fulfilled. The number of vacancies and the acceptance of electrons are proportional to each other.

Please refer to this link for Semiconductor Device MCQs

Whether silicon is doped with gallium or indium the process is also can be represented by utilizing the same concept of boron and silicon.

In this way, the semiconductors that are rich in holes as there carriers formed by the trivalent impurities comes under the list of p-type semiconductors.

Whether silicon or germanium if they are added with a trivalent impurity that belongs to p-type of the semiconductor.

However, the concentration of electrons is less in the conduction band and the majority of holes are present in the valence band.

P-type because of majority a-holes it referred to as a positive type. As it is a p-type semiconductor the Fermi level is present near to the valence band rather than conduction band. 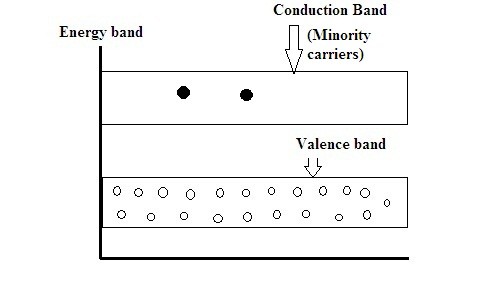 Once the impurity is inserted in the pure semiconductor numerous amounts of holes are formed in the valence band. There are thermal excitation’s also in the semiconductors because of this same amount of electrons are also present in the conduction band.

As the energy band diagram suggests there is less number of electrons in conduction band in p-type compare to that of n-type making the state of conductivity of n-type double than that of p-type.

The reason behind this is the excitation’s will release a tremendous amount of energy and also enhances the flow of current making to mold it purposefully based on requirements.

As the doping concept introduced in extrinsic and made it p-type and n-type. The formation of these types made changes in the development of modern electronics.

Please refer to this link to know more about Semiconductor Diode

For example, it can be LASER, LED or a BJT everything is interlinked to each other. In what ways do you think p-type is preferred over n-type?