You are here: Home / Electronics / What is Laser Diode – Construction & Its Working

In present photonics technology, LASER diodes play an essential role. The term LASER stands for “Light Amplification by Stimulated Emission of Radiation”. A Laser Diode is a p-n junction diode that emits laser radiation once the current is applied in forward direction. These diodes operate on the optical & electrical properties of semiconductor materials & PN junctions. The process used to emit coherent light in this diode is stimulated emission whereas, in light-emitting diodes, the process used to emit light is the spontaneous emission process. So, the emission of light in LASER is more complicated as compared to LEDs but the materials used in both diodes are the same. The wavelength of these diodes ranges from the visible to the IR based on the active layer’s material. This article discusses an overview of the LASER diode and its working with applications.

What is Laser Diode?

A semiconductor device that is used to generate high-intensity coherent light by using the process like Light Amplification by Stimulated Emission of Radiation (LASER) is called a laser diode which generates laser light. Here, coherent light means the light signals which are generated through the device include the same phase and frequency. This diode works on the principle of stimulated emission which is similar to LED. 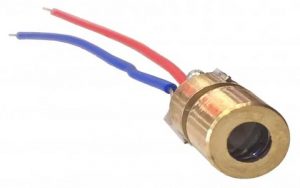 The sunlight or incandescent bulbs have waves with several wavelengths but they are not in phase with each other. But these diodes generate a thin laser light beam where all the light signals contain the same wavelengths & they move together. So, laser rays are extremely bright which targets an extremely small spot. These are used in different devices like barcode readers, laser printers, security systems, FOCs (Fiber optic communications), LIDAR, etc. Laser diode temperature typically selected between 20 to 25 °C.

The construction of a laser diode can be done using different materials like metal contact, p-type material, n-type material & intrinsic layer. The input terminals of this are connected toward metal plates which are inserted into the p-type and n-type layers. An alternative name of this diode is Homojunction Laser Diode. 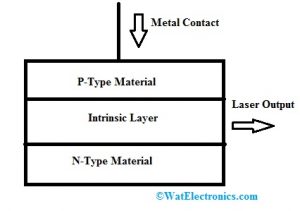 The intrinsic region used in between the p-type & n-type material is to enhance the capacity of the active region so that more charge carriers can build up at the junction. This permits several electrons to combine through holes at any time, so gives better output power. The laser light is generated from the elliptical region that can be focused through an optical lens. This whole arrangement of the PIN diode is enclosed usually within a metal casing.

These are available in different types which include the following.

In this diode, the quantum well layer is located in the middle of the diode. The quantum energy is mainly used for changing the charge carriers like electrons from upper to lower energy & is accountable for improved efficiency.

Laser diodes need complex drive circuits which use feedback loops to measure temperature, input current, o/p optical power & voltage. The circuit diagram of the laser diode is shown below which is build with an LM317 IC. Here, IC LM317 is connected to work as a constant current source. The output current mainly depends on the resistance value between Vadj & Vout of the voltage regulator. 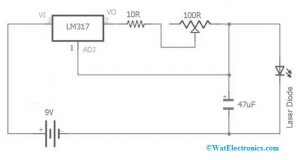 The output current can be changed through a 100R potentiometer which supplies into the diode. The resistor used in the circuit like 10R is used to restrict large currents once the potentiometer is at zero. Here, a capacitor like 47uF is mainly used to absorb the spikes of voltage from the battery.

In this process, once an external energy source is given to the electrons then the flow of electrons can jump from one energy level to another like low to high which is also called valence to the conduction band.

In the spontaneous emission process, if the flow of electrons within a higher level of energy is not stable then immediately they start moving toward the low level of energy. However, if they jump from one energy level to another like high to low then they will definitely generate the energy which is the difference between the two levels. Here, the released energy will be in light form, so photons will be generated. So this entire process is called spontaneous emission.

In this kind of emission, the photons hit electrons at a high level of energy, supplied from an exterior source of light energy. Once these photons hit the electrons, then immediately they will gain energy & recombine through holes to generate an additional photon. Therefore, one incident photon motivates another photon to let go. Therefore, this process is known as stimulated emission.

The characteristics of laser diode include the following.

In the above characteristics, the vertical line denotes the optical power of generated light whereas the horizontal line specifies current. So from the above characteristics, we can notice that, once the power reaches threshold voltage then the power will be increased gradually for a little increase within the current. The power generated through this diode is dependent on the associated temperature along with the device.

The properties of the laser diode are coherence, monochromaticity, brightness & directionality.

The main difference between LED and Laser Diode includes the following.

The advantages of laser diode include the following.

The disadvantages of laser diode include the following.

The applications of laser diode include the following.

Please refer to this link to know more about LDO Regulator.

Thus, this is all about an overview of laser diode and its working. These are used in major electronics fields like consumer electronics, medical devices, autonomous vehicles, scientific devices, industrial applications, etc. Laser diodes wavelength ranges from 810 – 1064 nm wavelengths. Here is a question for you, what is a laser diode module?