You are here: Home / Digital Electronics / What is a Digital Circuit : Design, Types & Its Applications

Digital electronics operate on digital signals and a digital circuit is an integral component of digital electronics. It is used in various electronic devices for different purposes. The main purpose of this circuit is the transmission of power to the different components of the circuit. It can perform different types of Boolean operations. The Digital circuit is one such circuit where the signal exists in one of the two states which are 0 and 1. We use this kind of circuit to make logic gates and transistors. These circuits consume relatively less power as compared to analog circuits. Some of the important components of a digital circuit include registers, transistors, battery and many more.

What is Digital Circuit?

A digital circuit is a type of circuit that operates on different logic gates. The logic gates are used to differentiate between various power signals. It can be used to transmit the power signal to the different parts of the electronic device through various gates. This will help to create an output signal which is directly proportional to the energy level of the input signals. Most of these circuits consist of analog components. They have a more complex design as compared to that of analog circuits.

Here, we have discussed some of the basic components of an electronic circuit:

Diodes: Diodes are used to allow the flow of current in a particular direction only. Diodes are made up of semiconductor materials.

Transistor: Transistor is basically a semiconductor device that has three terminals. It can be used as an amplifier or a switching device.

Resistor: A resistor is a passive component that is used to oppose the flow of current in a circuit. Resistors follow Ohm’s law. Resistors are of two types: Fixed resistors and variable resistors.

Capacitor: A capacitor consists of two conducting plates between which there is an insulator. Capacitors are mainly used to store electrical energy in an electric field.

Inductors: Inductors are used to store electric energy in a magnetic field. It is also used to resist changes in current.

Battery: Battery is another important component of an electronic circuit which is used as a source of power. A battery converts chemical energy into electrical energy.

Logic Gates: Logic gates are the most basic components of a digital circuit. They have two or more inputs and they produce one output. Logic gates are basically of three types:

Switch: A switch is another component of an electric that is capable of regulating the flow of electric current through the circuit.

Please refer to this link for Digital Circuits MCQs

Digital circuits can be designed using the various components which are generally used in the circuit.  Here, we have shown a simple circuit consisting of a few important components. The following circuit has a diode, a resistor, an inductor, a capacitor, and a power supply. 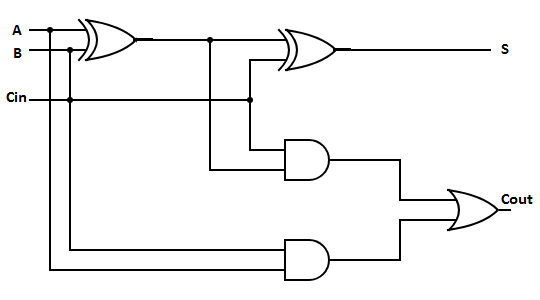 The following circuit is that of a full-adder which can be used to add the bits of the circuit. The circuit performs a boolean operation on the input bits to produce the result. The circuit consists of two XOR gates, two AND gates, and an OR gate.

Digital circuits are of two types:

The combinatorial logic circuit is made up of logic gates whose output is determined by the present input only. The output does not depend on the previous outputs of the circuit. This type of circuit is widely used in the electronic industries for various purposes. The circuits are designed by combining the different logic gates. Two types of combinatorial circuits are encoder and decoder. Other examples include half adder, full adder, and multiplexer.

1). What are digital circuits used for?

A digital circuit is used for the transmission of power to an electronic device. It can be used to perform different operations based on the input which is given to the electronic circuit.

2). How does digital circuit work?

A digital circuit works on discrete values only which are either 0 or 1. An analog to digital converter can be used to convert the analog signal to digital values.

3). What makes a circuit digital?

A circuit that produces a digital signal is called a digital circuit. It works on discrete values. Digital circuits are required in all-important electronic devices like mobile phones, calculators and computers.

Circuits can be used for performing multiple tasks. You can also use circuits to supplement non-electrical sources. Electric circuits are mainly used for transporting electric power to different electronic devices.