In this digital world of electronics, the information is stored in the form of bits (Binary). Certain arithmetical operations like addition, subtraction, multiplication, and division are to be performed on these bits.  The combination of ‘Arithmetic Operation’ with certain ‘logic’ using binary numbers was established by Leibniz. Further, the electrical circuits of switching based on vacuum tubes were designed. The invention of relays replaced the ‘vacuum tubes’ in switching circuits. Finally, all the inventions lead to the destination of the logic gate.

As there were step-by-step revolutions in digital electronics, Konrad Zuse is the man who was behind the development and the design of ‘Electrochemical Logic Gate’.  The ‘Boolean Algebra’ and the switching operation from then on were carried out by the logic gates. Let now get into detail about how are these logic gates designed and their different available types.

What is Logic Gate?

A digital electronic circuit that is made to perform certain logical operations is defined as Logic Gate. It can be designed using any ‘Non-Linear Device’.  The sole condition is that it must consist of two different regions for operation.

The most commonly known devices with non-linear characteristics are Diode and the Bipolar Junction Transistors (BJT). The logic levels of voltages are assigned to the circuits to carry out the operation. The logic assignment of supply voltages can be of two types. It can be classified as a Positive Logic System and a Negative Logic System.  In the positive system, logic 1 is +5 Volts and logic o is 0 volts. The level assignment is reversed in the negative logic system.  The most commonly preferred system is Positive Logic.

The most common example of an assignment of the logic level is ‘Light Bulb’. It gets switch ON or OFF based on logic 1 and logic 0 applied.

The design of digital circuits is based on logic gates. The combination of input signals is applied to generate a single output.  Initially, there are three basic logic gates. They are AND, OR, and NOT.

It consists of ‘two or more inputs and produces only one output. If each of the inputs applied to the gate is logic 1 then the output will be logic 1. Otherwise, if any one of the inputs is 0 the output generated will be 0. This type of functionality gate is defined as an AND gate. The AND gate is also known as the ‘ALL’ or ‘NOTHING’ gate.

If the inputs applied are A, B. Then the output ‘Z’ generated can be expressed as Z= AB.

The symbol for AND Gate is

The realization of AND gates is also done by using Transistors and Diodes.  When the two diodes are connected along with a resistor and based on the supply provided the output is generated. 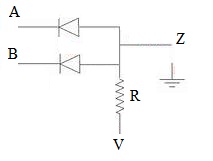 when both A and B are applied with +5 Volts. The diodes remain OFF. Hence there is no chance of occurrence of Voltage Drop across the resistor. Therefore the output obtained is high.  When both the input values are provided with 0 Volts the circuit will be short-circuited. Practically o volts are not possible it refers to 0.6 or 0.5 volts.

The circuit of AND can also be realized by using transistors. When both the inputs or even any one of the output is o then the base current drives the Q3  to ON. Therefore, the output obtained because of Q3 is 0 volts. 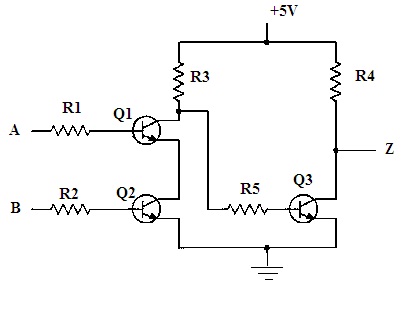 When both the inputs are +5Volts both Q1 and Q2 are ON. Hence no base current can drive the transistor Q3. Therefore Q3 is OFF and the output obtained is +5Volts.

Likewise, the AND gate the OR gate has two or more inputs and one output. The output of the OR gate is high if both the inputs are high or even one of the inputs is high. 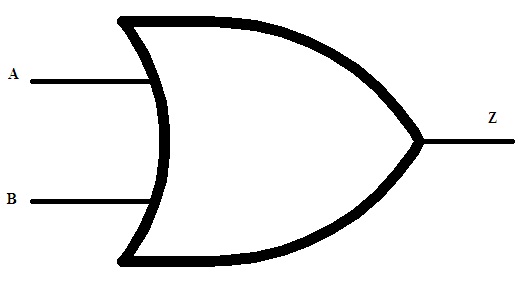 The Truth table of OR clearly states that the value of output remains high even if the single output is high.  If the inputs applied are A and B and the output obtained is denoted by Z. 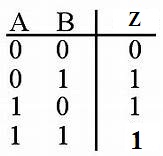 The same circuit realization can be done based on diodes. To the applied inputs the diode behaves accordingly. When both the applied inputs are 0 volts then diodes remain OFF. Then no chance of current flow through the circuit. Hence there is no voltage drop crossover in the resistor. Therefore the output generated is 0 volts. 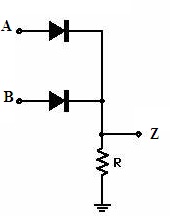 If anyone of the input or both the inputs applied are high. Then both the diodes or either of the diode is high the current flows through the circuit. The output generated due to this is high. Similarly, the same operation of OR is realized using transistors in the circuit.

Last but not least in the category of basic gates is the NOT gate. Generally, it consists of one input and one output. If the value applied at the input is 1 the output will be 0 and vice-versa.

The symbol for the logic NOT gate is 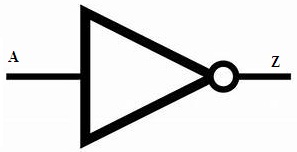 The Truth Table for the NOT gate is 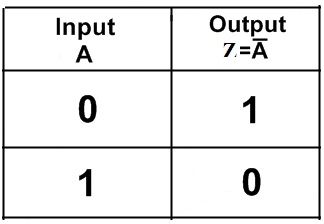 The combination of AND and NOT gates connected in series is defined as the NAND gate. All types of binary operations are performed by these gates.

The Truth Tabe of the NAND gate is 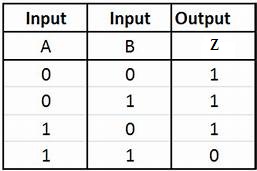 When both the inputs applied are 1 the output obtained is 0. The operation of the NAND gate can be understood based on the circuit diagram and the applied inputs. 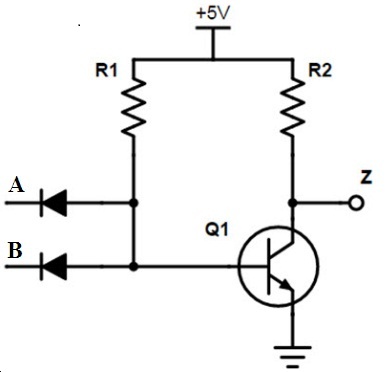 As per the above circuit connection between diodes and an NPN transistor the circuit for the NAND gate is designed. It is the combination of AND gate followed by an inverter. If both the inputs that are A and B applied with 1 both the diodes are reverse biased. Then the overall supply reaches the base of the transistor Q1. This turns the transistor ON and the voltage gets short-circuited to the ground. Hence the output obtained becomes zero.

Similarly, the diodes are forward biased for the other applied inputs and the transistor is in OFF mode. Therefore the outputs obtained in such cases are high.

The symbolic representation of the NOR gate is 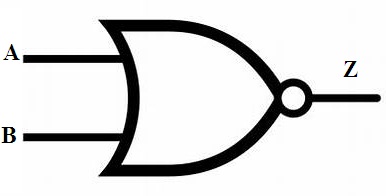 Logic Symbol of NOR Gate

The Truth table for this gate is 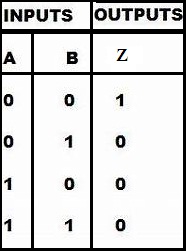 This type of gate generates output as high when both the inputs are 0 volts. 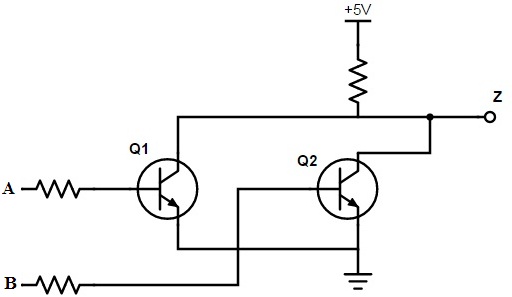 Logic Circuit Diagram of NOR Gate

Two inputs applied to the gate to generate a single output which is capable of producing logic 1 as output when any one of the inputs is high. The purpose of this gate is to detect inequality. This is also referred to as ‘Inequality Detector’. By the connection of logic 1 to any of the input terminals, the circuit behaves as an inverter. 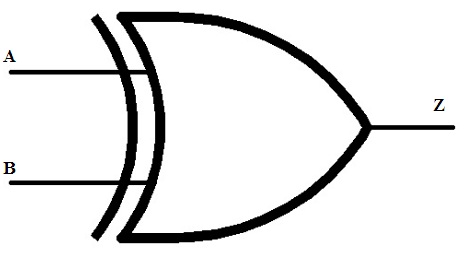 The Truth Tabe for this XOR gate is

From the truth table, it can be intelligibly stated that for the applied odd inputs of 1 the resultant will be logic 1. If more than two inputs are considered then the behavior of this gate is decided based on its implementation.  The operation performed by XOR is excluding the carry bit. This is the reason for defining this gate as an Exclusive OR gate.

The logic circuit diagram for this exclusive gate is designed in the combination of AND and OR gates at the output.

Please refer to this link to know more about XOR gate MCQs. 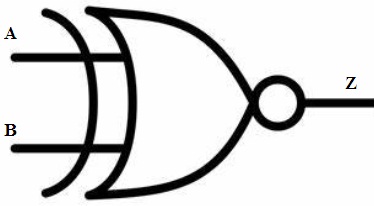 The truth table for the gate is

Truth Table of X NOR Gate

The logic circuit diagram for this kind of operation is

Please refer to this link to know more about XNOR Gate MCQs.

Logic gates are the essentials for the designing of digital circuits. Some of them are described as follows:

Konrad Zuse is the man behind the basic design of logic gates.

2. What is the Principle of Logic Gates?

The logic gate works on the principle of discrete connection of non-linear devices. For example, the combination of transistors is connected to form the logic gates.

3. What are the three basic Logic Gates?

The three basic logic gates are AND, OR, and NOT.

4. What are the seven Logic Gates?

After the overview of all the basic logic gates. One can predict the importance of it in digital circuits. Can you determine what is the most preferred IC for such arithmetic operations?