You are here: Home / Basics / Sequential Circuits : Types & Its Applications

In the current digitized technology, there has been an enormous progression in the prospects of developing electronic circuits both in the digital and analog domains. In parallel with the development, the complexity also enhances at a quick rate. This enhancement in the complexity allows designers and developers to bring up modern engineered structures and designs in the electronics domain. And, in the scope of this evolution of sequential circuits took place. The article explains a clear scenario on the design and optimization of sequential circuits with maximum functionality and with the utilization of a minimum number of logic gates. Let’s go with a comprehensive approach to the functionality and performance of a sequential circuit.

What is a Sequential Circuit? 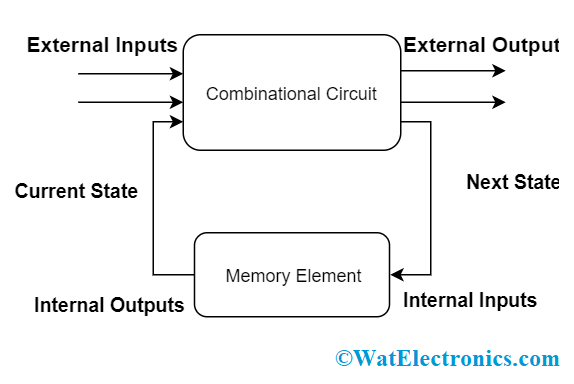 As every digital and memory circuit is built based on the finite state machines, sequential circuits are implemented for the construction of these machines. So, these circuits hold more prominence in digital and electronics technology.

Here comes the discussion on the types of sequential circuits. These are of mainly two types and are discussed below:

Synchronous sequential circuits use level inputs and clock signals as the circuit inputs having limitations on the circuit propagation time and pulse width to generate the output. The duration of the output pulse is like the clock pulse of the clocked circuits. Level output modified its state at the beginning of an input pulse and continues in that until the next clock pulse arrives. Until the arrival of the next pulse, these circuits perform no activity and so the operation is a bit slower than that of asynchronous circuits.

Again, synchronous circuits are of two types clocked and unclocked.

Clocked circuits use flip-flops and gated latches as the memory elements. The operation of the circuit is operated by the periodic clock pulses where these are connected to the clock inputs to synchronize all the internal modifications of the state.

These circuits do not require any clock. The internal changes of the state are based on the pulse transitions between 0-pulse or 1 -pulse. This is designed to act in response to the pulses of specific time; the periodic signals in between the null and spacer signals.

Synchronous sequential circuits are implemented in the design of flip-flops, counters and to develop MOORE-MEALY state-controlled machines.

Asynchronous sequential circuits are cost-effective to be used in small independent systems that need only a few elements. The communication between two elements, each hold its own independent clock, and this will be achieved by these circuits.

To describe there are various examples of sequential circuits. Few of the examples are

It is an example of a sequential circuit that generates an output based on the sampled inputs and changes the output at certain intervals of time but not periodically. A flip flop is an edge-sensitive device.

S-R flip flop is the combination of NAND gates and an enable input. The output is generated only when the enable input is in the active mode i.e. E=1. Whereas when E=0, there is no change in the output.

The basic diagram of S-R flip flop is

D flip flop is the combination of a simple SR flip flop with a NAND inverter which is connected in between the S and R inputs. D flip flop has one input and the input information appears at the output after some delay. So, this delay names this flip flop as Delay flip flop. Here, in the conditions of S = R = 0 or S = R = 1, then the input condition will not appear.

The basic diagram of Delay flip flop is

Toggle flip flop is generally a JK FF with J and K inputs connected. Here only one input is present, and this flip flop is positive-edge triggered.

The basic diagram of toggle flip flop is

To be clear, a flip-flop is the memory element used to store binary data and has two states; where one state defines as “1” and the other state as “0”. So, information storage means to store the state.

The Need of Sequential Circuits

Well, these days digital electronics observed widespread progression and of the numerous elements, the one that received extensive prominence is sequential circuits. These sequential circuits stand as fundamental building blocks. We need these circuits to gain improved performance and they are employed in the operations that work with less power. Moreover, the speed of operation in processing the activities also gained the sight of many.

Multiplexer is a Sequential Circuit or Not?

Multiplexers are not sequential circuits. They are the combinational circuits having 2n inputs and a single output.

So, we have discussed the operation of how a sequential circuit works. As it presents the output based on the past and current inputs, There has to be one element to store the past information, and the one that is used to store the data is “Register”. A register is a device used to store multiple bits of information.

Yes, Sequential circuits deliver output based on the past state inputs and current input where past information is stored in a memory element.

2. What are the three main classifications of sequential logic circuits?

The basic classification of sequential circuits is event-driven, pulse driven, and clock-driven.

3. What makes the difference between flip flop and latch?

The basic difference between the two is the process of modifying their state. The latch does not work with clock input whereas flip flop has clock input.

4. What is the basic example of event-driven circuits?

A digital alarm is the fundamental example of an event-driven sequential circuit where it is activated by the event that raised up the alarm.

5. What are the two different conditions of an asynchronous circuit?

Please refer to this link to know more about Priority Encoder.