You are here: Home / Electronics / What is a Combinational Logic Circuit : Types and Applications

As the scope of digital technology and digital electronic circuits extends to many domains such as software, healthcare, automation, business and many, electronic representations of Boolean functions, numerous bands of logic gates are utilized to represent these digital signals. In the digital logic scenario, the output is completely a function of the current input. In a consequence of this process, logic gates that are used to represent digital circuits are categorized as sequential logic circuits and combinational logic circuits. As the implementation of the combinational logic circuits is in many computer circuits, let’s go ahead with the detailed discussion of how they operate, and many other conceptions related to this concept.

What is a Combinational Logic Circuit?

Either the complicated or simple combinational logic, these can be represented through ‘NAND’, ‘NOT’ or ‘NOR gates’.

For example, an expression that can be represented in the above three approaches as follows: 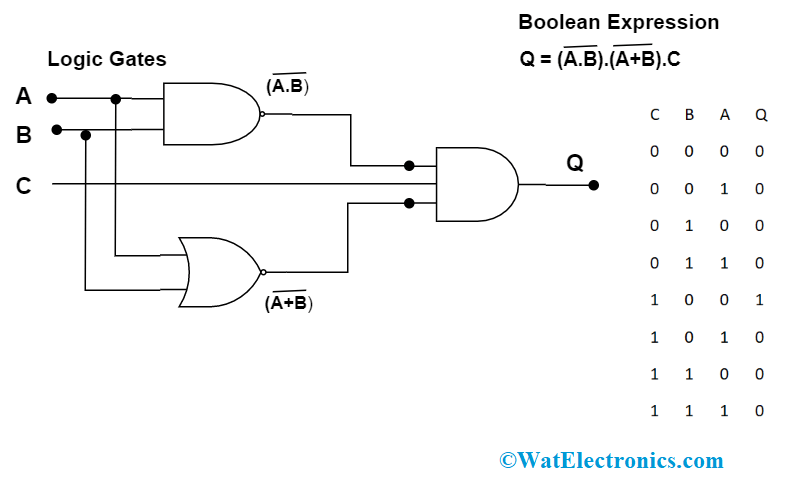 Combinational logic circuits are classified as below 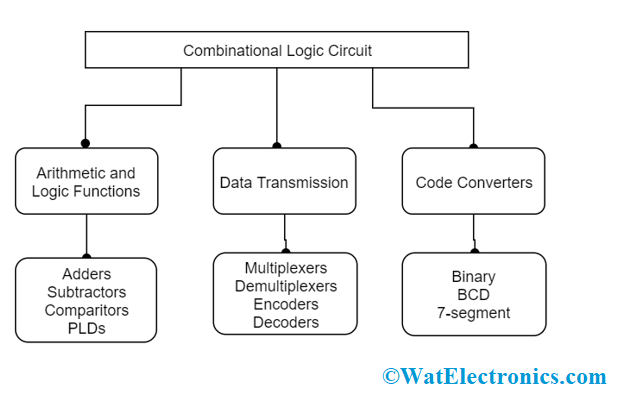 The foremost implementation of the combinational logic circuit is Multiplexer and de-multiplexer. In these, many numbers of inputs or outputs are on a single line and the logic gates are employed to decode corresponding output for the specified input.

The extensive implementation of combinational logic circuits today allowed us to discuss on a greater number of examples. Some of the real-life examples are as below:

It is the combinational logic derived by using two inputs and two outputs. The circuit design allowed us to add two one-bit binary numbers. So, the main purpose of using half adder is for addition. With the inputs as A and B, the circuit can be designed as follows

To gain the outputs Sum and Carry, the circuit is connected in the below format 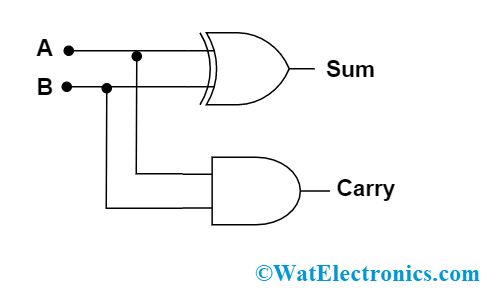 To surmount the disadvantage that is in half adder circuit, the full adder is designed. It holds the ability to add two binary numbers along with carrying input. So, it is the circuit with three inputs and two outputs.

To gain the outputs Sum and Carry, the circuit is connected in the below format 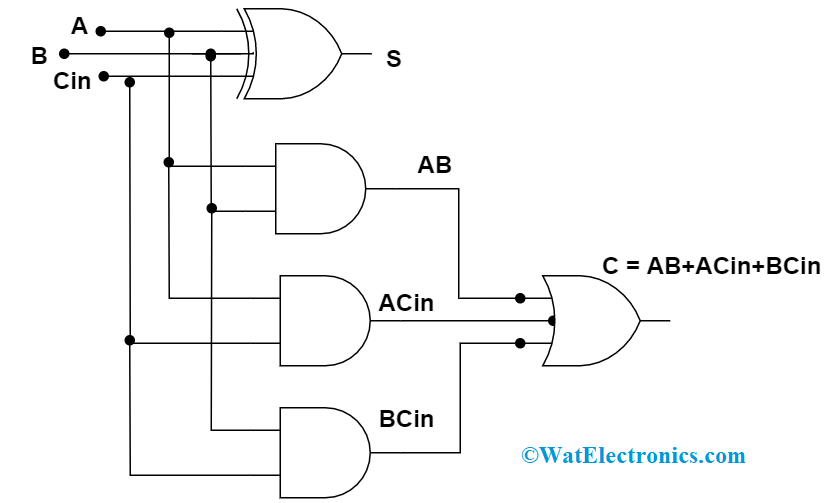 Note: As full adder holds the ability to add two one-bit binary numbers, in many cases we need to add n-bit numbers along with the carry. In those cases, an n-bit parallel adder holds the ability to add n-bit binary numbers. It is the combination of many full adders. So, the carry output of the previous adder is connected as an input to the next adder.

Accepting two binary numbers ‘A’ and ‘B’ as inputs, half subtractor derives the outputs borrow and difference. ‘Difference’ is the difference between two input numbers and while ‘Borrow’ is the one that carries borrow if any. In both the inputs, A is termed as Minuend and B is termed as Subtrahend.

To gain the outputs Difference and Borrow, the circuit is connected in the below format 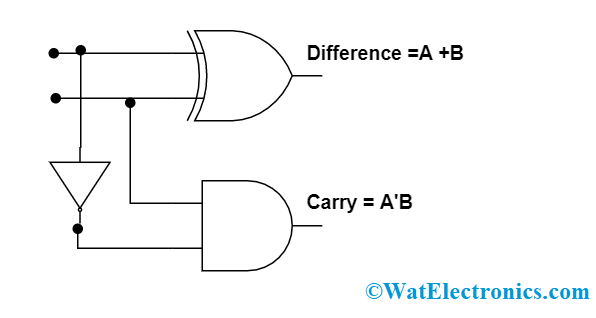 To take away the disadvantage of half-subtractor, a full subtractor is designed. The circuit is designed with three inputs that deliver two outputs one is Difference and Borrow. Where ‘Difference’ is the difference of two inputs and ‘Borrow’ is the carried borrow.

The delivered output from full subtractor is as below

To gain the outputs Difference and Borrow, the circuit is connected in the below format 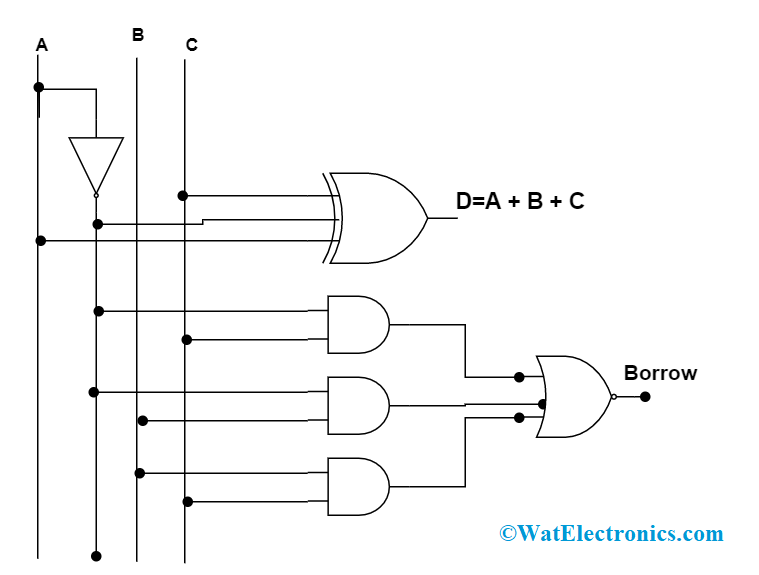 In detail, the process can be explained as:

• The subtracted number has to be passed through an inverter to get its complement.
• Then the 4-bit adder adds A and the complement of B and delivers subtraction results.
• When A>B and C is 0 and the result of A-B in binary format, then C =1 and the output is in 2’s complement form.
The below circuit diagram clearly explains the flow of the n-bit parallel subtractor.

A multiplexer is the foremost application of a combinational logic circuit. The circuit has ‘n’ inputs, ‘m’ selection inputs with 2m = n and one output. This is the digital circuitry that chooses one data input and directs it to output. The selection of the inputs is carried out by selection inputs. Based on the applied digital code, one of the inputs is selected and addressed to the output. Cascading operation is performed by ‘E’ input which is the active low terminal input. The block diagram of the multiplexer is as follows 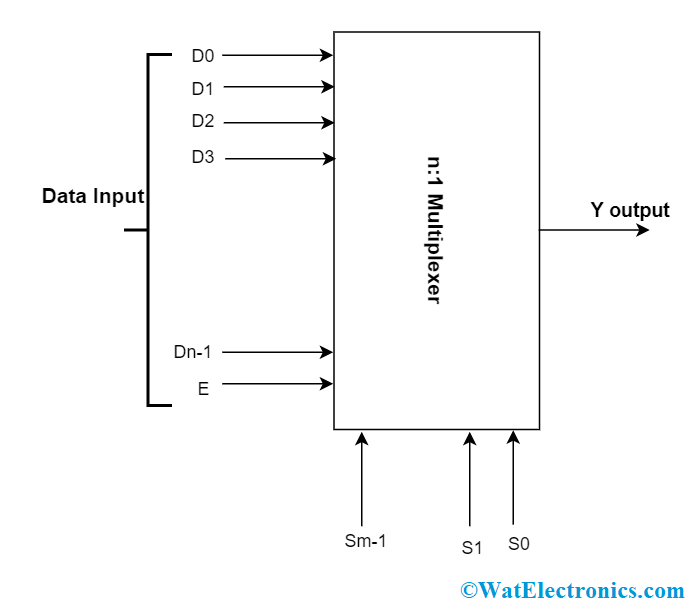 Block Diagram – This is the basic block diagram of how a 2:1 mux operates 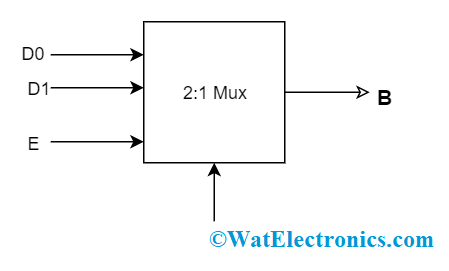 2-1 mux in the combinational logic circuit

A de-mux performs the operations reverse to that of a multiplexer. It has only one input and delivers multiple outputs. The circuit is designed with one input, ‘m’ select inputs and ‘n’ outputs. At a single instance, only one output is chosen through selection inputs and it is directed to the output. Demultiplexers are used in many of the applications as because they are in available as

Block Diagram – This is the basic block diagram of how a 1:2 demux operates 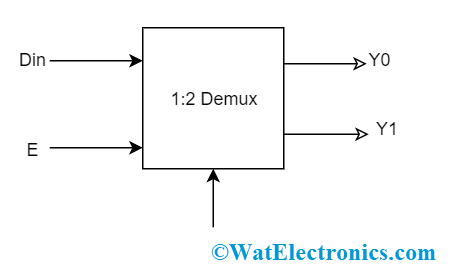 1-2 demux in the combinational logic circuit

The output can be derived as below.

Decoders, encoders, priority encoders are all examples of the combinational logic circuits.

Combinational logic circuits are the basic building blocks of digital systems. They have an extensive variety of applications. They are used in

Combinational logic circuits as data transmission circuits have applications as

Combinational logic circuits as code converter circuits have applications as

To minimize Boolean expressions, various approaches are followed. K-map and Quinne-McCluskey are the most followed techniques. The above-stated procedure is a streamlined and effective technique. Through this, the design of circuits seems to be completely reliable.

Is Multiplexer a Combinational Circuit?

Yes, Multiplexer is a combinational logic circuit that derives multiple outputs from the single input and it is designed through the combination of logic gates.

Is Flip Flop a Combinational Circuit?

No, Flip flop is an example of a sequential circuit that generates an output based on the sampled inputs and changes the output at certain intervals of time but not periodically.

The need for Combinational Circuits

Well, these days the scope of digital electronics gained utmost prominence and of the numerous elements, the one that received extensive prominence is combinational logic circuits. These circuits are the basic building blocks of digital systems. We need the implementation of these circuits to gain improved performance and they are employed in the operations that work with less power. Moreover, these are time-independent, and less implementation cost circuits and in processing the activities this feature helps the most.

1. How Boolean Algebra is used for?

It is the technique used to simplify and analyze digital logic. As it functions using the bits 0 and 1, it is also termed as Binary Algebra

Eliminating the complication involved in Boolean algebra theorems, manipulations and equations, k-map is the pictorial representation of reducing Boolean expressions.

4. What do you mean by multiplexing?

It is the process of transmitting multiple data streams through a communication link and then the receiver recovers individual signals.

5. What are Boolean operators?

Please refer to this link to know more about Full Subtractor MCQs.