You are here: Home / Basics / Basics of PNP Transistor – Construction & Its Working

What is a PNP Transistor?

A PNP transistor can be defined as the formation of a bipolar junction transistor can be done because of the connection established between two p-types & one n-type in the middle of it. So this is known as a PNP transistor. In this way, we can define the PNP transistor. For the applications of switching and regarding the amplification of the signals, this N-P-N transistor is preferred. The PNP transistor symbol consists of three terminals emitter, base, and collector. The arrow is sharply pointing towards the base indicating the flow of current from the emitter terminal to the base. 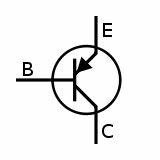 The construction of it is similar to that of the N-P-N transistor but here the differences arise in the polarities of the voltages applied. The characteristics tend to differ because here the voltage that has been applied in between the terminal base is negative and that of the emitter is positive.

Some of the electrons are gets combined remaining tends to move towards the collector. The reason behind this is that the base at the PNP transistor is doped with light concentration. Hence this leads to the generation of the current at the base terminal.

As the junction formed due to the terminals of collector and the base is in the reverse bias mode.  The electrons entered in it get collected. Hence the generation of the current at the collector takes place.

In order to make the transistor work as a switch, it must be operated in certain regions. As it is already known that there are three operating regions in the bipolar junction transistors either it may be NPN or PNP.

There are three terminals emitter, base, and collector which two junctions are formed in it because the base terminal is in the middle and commonplace of interaction for emitter and collector. Based on this, the way biasing is done for the junctions the regions of the transistors are classified.

The three regions are: 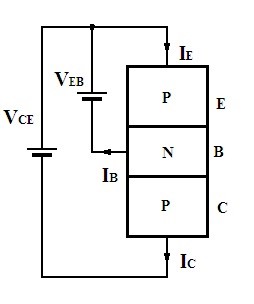 P-N-P Transistor Construction as a Switch

All these regions are formed in the transistors. In order to make the transistor work as a switch only two transistors are preferred either both the junctions must be completely ON that is saturation mode or the junctions must be completely OFF that is in cut-off mode. This process of operation is referred to as a switch.  But the active region is not used for this purpose because the q-point in this region lies at the center.

The applications of the PNP transistor are as follows:

In this way, the PNP transistor is constructed and it can be used as a switch. Now can you choose which type of BJT transistor is preferred as a Switch?