You are here: Home / Digital Electronics / Basic and All-inclusive concepts in Boolean Algebra

Initially, we are only with the propositions of true and false and these bivalent values introduced four laws of logic. But in many of the situations, there might be a need of more than these two values, in that case, the bivalent solution fits in. This bivalent approach is proposed by Aristotle. Making modifications to his approach George Boole founded Boolean Algebra which categorized multiple laws of relationship those are in between mathematical quantities constrained to one of two values: 1 or 0 (or) true or L. But one might be in the confusion that how only those values will be valued either in a calculator or to compute current flow in the resistor. So, let’s move on with the concepts of what is Boolean Algebra and its principles, laws, and properties.

What is Boolean Algebra?

Boolean Algebra, which is also called as ‘Switching Algebra’ or ‘Logical Algebra’ uses the two variables ‘1’ and ‘0’  to evaluate and simplify the logical values. It works on various functions of logical values and integrates binary variables. Being so different from the binary operations which are performed through addition and multiplication operators, Boolean structure works with meet and join operators. We already discussed that Boolean Algebra works only with “0” and “1”, but a single expression might have many numbers of variables where all are individually represented as inputs for the expression.

As Boolean algebra is mostly implemented in the scenario of logic circuits simplification and to do this, there are certain rules to be followed. The rules are stated as below:

Each of the laws that are going to be stated below is given with either with one or two variables, but the number of variables specified by a single law is constrained to this because an expression may contain many numbers of variables as inputs. So, Boolean algebra laws can represent any kind of complicated expression in the digital circuitry. The laws are:

In addition to the operation of variables as per the rules and laws, there are theorems in Boolean algebra where the system is mainly based upon. Those theorems are
• De Morgan’s theorem
• Consensus theorem
• Shannon’s expansion theorem

This law mainly works on the principle of ‘Duality’. Duality corresponds to an interchange of variables and operators in an expression. It means in the sense that interchanging of H with L and L with H.

To solve the algebraic expressions, De Morgan’s law is expressed as two statements

De Morgan’s theorem can also be implemented through logic gates by using AND and OR gates.

Consensus theorem can be explained in two statements one in normal method and the other is the dual method. It states that consensus terms of the disjunction are specified when the terms in the expression are complements to each one like X and X’. The two statements are

This theorem is implemented to expand the Boolean expression regarding a single operator.

For example, it can be explained as

In the same way theorem 2 can be stated as

For example, it can be explained as 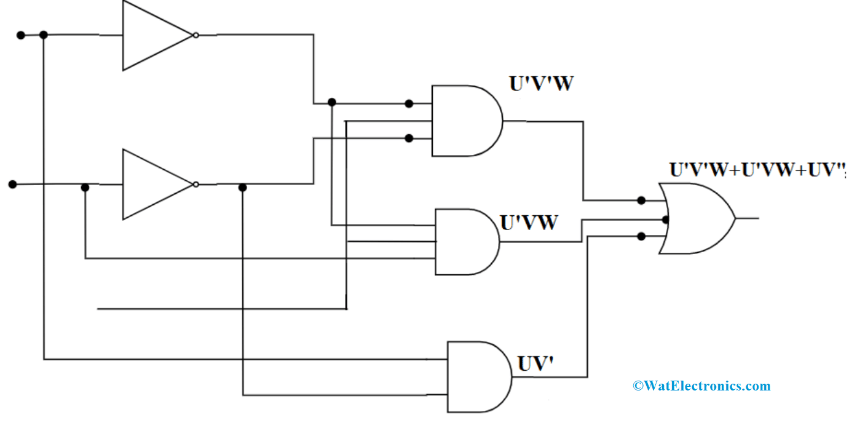 The applications of Boolean algebra can be in any domain where the variable has two conditions. Below are the few real-life examples in Boolean Algebra:

The other applications are in two-floor elevator, calculators, watches, seven-segment displays, digital clocks, electronic circuitry, and many others.

So, we are with the conclusion that Boolean numbers are completely different from the real numbers and it is a different kind of mathematics. As because of extensive applications and uses, Boolean algebra holds great prominence. So, know how Boolean Algebraic expressions are implemented?

Please refer to this link to know more about De-Morgan Theorem MCQs.

1. What is the use of Boolean algebra?

The main purpose of Boolean algebra is to evaluate and simplify the complicated logic circuits. With the use of binary numbers ‘1’ and ‘0’, the system performs many functions.

2. How do you calculate Boolean algebra?

3. How Boolean algebra is different from algebra?

4. What is Boolean logic?

Boolean logic is mainly considered as the core of evaluating expressions and this logic is performed with the logic gates “AND”, “OR” and “NOT”.

5. What is an example of a Boolean?