Push-pull amplifiers  are the combinations of two bipolar junction transistors that is one of P-N-P type and the other is of N-P-N type. In this combination one act as push type and the other acts as pull type. If the single-stage amplifiers are utilized lot of heat dissipation occurs in the circuit and so the efficiency is less though it gives 90% amplification of the input signal.

What is a Push-Pull Amplifier? 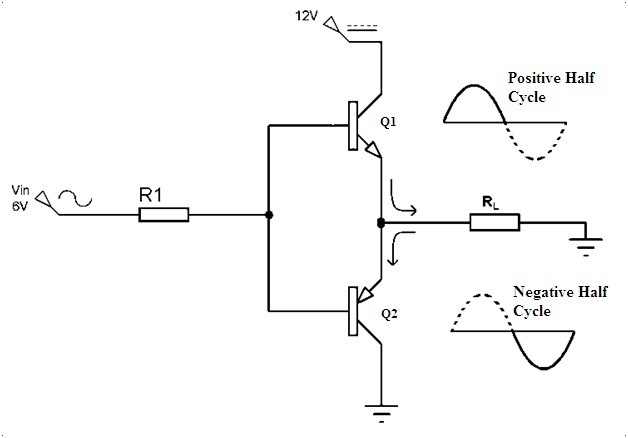 It can be classified into various types. They are class A, class B, and Class AB. Among all these class B is best suited as the push-pull amplifier.

In this type of configuration, there is only one single transistor present in it. In this case, this transistor is remained ON always. Because of which the distortions are minimum in this case and the amplitude obtained in this is maximum. But the efficiency of this class is very low that is nearly around 30 percent.

This type of amplifier satisfies the condition of the push-pull amplifier. In this case, the two transistors are connected in such a way that each transistor is operated per each half-cycle provided to it. It is good at providing greater efficiency than class A amplifiers.

But it has a drawback that it suffers from the problem of crossover distortion. This occurs because of the dead zone which get created as either of the transistor(NPN or PNP) cannot turns on at the same time. To overcome this problem another class of amplifiers is designed such that these are provided with some interfacing diodes .

The problem of class B amplifier can be overcome by connecting the diodes in such a way that the diodes are biased just above the value of the cut-off. This helps in the overcoming the problem of cross over distortions.

In this way, the push-pull amplifier has many advantages in terms of gain efficiency and the output power generated. But the condition that must be satisfied for this type of amplifier is that the two transistors that are utilized in this situation apart from being complimentary it  must be identical in properties otherwise both positive and the negative halves of the cycles are amplified individually instead of decreasing distortion it tends to increase the distortion values.

This type of amplifier circuit is utilized in many applications. They are:

Each amplifier design has its significance in terms of its generation of high-quality output and efficiency gains. The push-pull amplifier designed consists of two stages. One stage acts as a source to the load and the other enact as a sink from the load.

The major criterion of this design is to provide a highly efficient circuit with minimum distortions and low heat dissipation which inturn reduces the usage of heat sink. But there are certain cases where these amplifiers are prone to the harmonic distortions. So depending upon the requirement of the circuit the amplifiers has to be chosen.

Now can you describe whether a class AB amplifier is worth-full in practical applications?

Please refer to this link to know more about Audio amplifier circuit.