You are here: Home / Components / What is IMPATT Diode : Construction & Its Working

The concept of IMPATT diode was actually invented in the year 1954 by William Shockley. So, he expanded the idea for producing a negative resistance with the help of a mechanism like transit time delay. He proposed the injection technique for charge carriers within a PN junction is forward biased and published his thought in the Technical Journal of Bell Systems in 1954 and titled with the name ‘Negative Resistance Occurring from Transit Time within Semiconductor Diodes.

Further, the proposal was not extended until 1958 as Bell Laboratories implemented his P+ N I N+ diode structure and after that, it is called Read diode. After that in the year 1958, a technical journal was published with the title name “a proposed high-frequency, negative resistance diode.” In the year 1965, the first practical diode was made and observed first oscillations. The diode which is used for this demonstration was constructed through silicon with a P+ N structure. Later, the Read diode operation was verified & after that, a PIN diode was demonstrated in the year 1966 to work.

What is IMPATT Diode?

The full form of IMPATT diode is IMPatt ionization Avalanche Transit-Time. This is an extremely high-power diode used in microwave applications. Generally, it is used as an amplifier and oscillator at microwave frequencies. The operating frequency range of the IMPATT diode ranges from 3 – 100 GHz.

Generally, this diode generates negative resistance characteristics so works as an oscillator at microwave frequencies for generating signals. This is mainly because of the transit time effect and impact ionization avalanche effect. The classification of IMPATT diodes can be done by two types namely single drift and double drift. Single drift devices are P+NN+, P+NIN+, N+PIP+, N+PP+.

When we consider the P+NN+ device, the P+N junction is connected in reverse bias then it causes an avalanche breakdown that causes the region of P+ to inject into NN+ with a saturation velocity. But the holes injected from the region of NN+ do not drift which is called single drift devices.

The main features of the IMPATT diode include the following.

The construction of the IMPATT diode is shown below. This diode includes four regions like P+-N-I-N+. The structure of both the PIN diode and IMPATT is the same, but it works on an extremely high voltage gradient of approximately 400KV/cm to generate an avalanche current. Usually, different materials such as Si, GaAs, InP, or Ge are mainly used for its construction. But, material like GaAs is mostly preferred due to its less noise behavior. 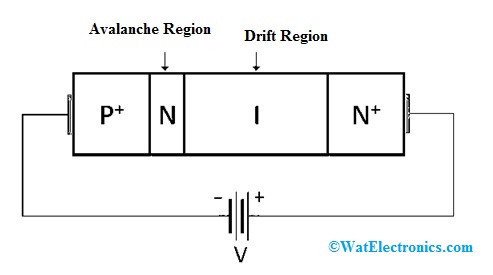 As compared to a normal diode, this diode uses a somewhat different structure because; a normal diode will break down in an avalanche condition. As the huge amount of current generation causes the heat generation within it. So at microwave frequencies, deviation in structure is mainly used to generate RF signals. Generally, this diode is used in microwave generators. Here, a DC supply is given to the IMPATT diode to generate an output that oscillates once an appropriate tuned circuit is used within the circuit.

The output of the IMPATT circuit is consistent & comparatively high as compared to other microwave diodes. But it also produces a high range of phase noise, which means that it is utilized in simple transmitters more commonly than local oscillators within receivers wherever the performance of phase noise is normally more significant.

This diode works with fairly high voltage like70 volts or above. This diode can limit the applications through phase noise. Nevertheless, these diodes are mainly attractive alternatives for microwave diodes for several regions.

application of IMPATT diode is shown below. Generally, this kind of diode is mainly used at above 3 GHz frequencies. It is noticed that whenever a tuned circuit is given with a voltage in the region of the breakdown voltage toward the IMPATT then oscillation will occur.

As compared to other diodes, this diode uses negative resistance and this diode is capable of generating a high range of power typically ten watts or above based on the device. The operation of this diode can be done from a supply using a current limiting resistor. The value of this restricts the flow of current to the value necessary. The current is supplied throughout an RF choke to separate the DC from the RF signal.

The IMPATT microwave diode is arranged beyond the tuned circuit but normally this diode may be arranged within a waveguide cavity that gives the necessary tuned circuit. When the voltage supply is given then the circuit will swing.

The main drawback of the IMPATT diode is its operation because it generates a high range of phase noise due to the mechanism of avalanche breakdown. These devices use Gallium Arsenide (GaAs) technology which is much better as compared to Silicon. This results from the very quicker ionization coefficients for charge carriers.

Difference between IMPATT and Trapatt Diode

The main difference between IMPATT and Trapatt diode based on different specifications is discussed below.

The characteristics of the IMPATT diode include the following.

The advantages of the IMPATT diode include the following.

The disadvantages of the IMPATT diode include the following.

The applications of IMPATT diode include the following.

Thus, this is all about an overview of IMPATT diode, construction, working, differences & its applications. These semiconductor devices are used for generating high-power microwave signals at a 3 GHz to 100 GHz range of frequencies. These diodes are applicable to fewer power alarms and radar systems. Here are a few questions for you, what is a TRAPATT diode? What is a laser diode?