You are here: Home / Electronics / What is Faraday’s Law : Formula & Its Experiment

Faraday’s law of electromagnetic induction was the own discovery of two scientists Michael Faraday in the year 1831 and Joseph Henry in the year 1832. The first results from his experiments were released by Faraday. In his initial experiment, he found the principle of electromagnetic induction. In this, he rolled two metallic wire strips all across the iron ring. With this, he came to know the principle behind electromagnets. He believed that when there is the flow of current at one end of the wire, this stimulates to generate waves all across the ring and develops electrical power on the other side of the wire. This principle stood as a base for developing multiple experiments of electromagnetic induction. And this is the history behind the discovery of Faraday’s law. This article explains clearly the concepts of how Faraday law is operated, enhance of EMF in the coil, its laws, and applications.

What is Faraday’s Law?

Faraday law is the one equation which states about two distinct phenomena which are motion EMF (which is developed by the magnetic force in the case of moving wire) and the transformer EMF (which is developed by the electrical force that happens because of the variation in a magnetic field). This is considered as the two phenomena for Faraday’s law.

When there is a change in flux, B gets varied or else as the wire loop is changed or both, then as per Faraday’s principle wire loop gains EMF which is stated as the energy received from the unit amount of charge which has gone all across the loop. The equation was selected to have compatibility with the terms of special relativity. Similarly, this is the voltage which is calculated by cutting wire into pieces in order to form an open circuit and then connecting a voltmeter across the edges of the wire.

Here, ФB  is termed as magnetic flux and є is the electromotive force. The path of the EMF is provided by Lenz’s principle. Faraday’s principle explains the relation between the variables’ paths and their magnitudes. Even though the relationship was not depicted clearly, it was known through the mathematical formula.

Through Faraday’s law, it is possible to know the path of the EMF without referring to Lenz’s law. For this, the left-hand rule will be helpful and the direction can be known as follows: 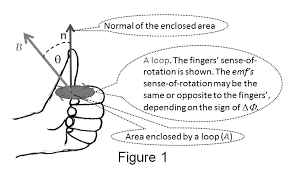 And this is the detailed explanation of Faraday’s law formula.

There are mainly two laws in Faraday’s law of electromagnetic induction. The first one defines the induction of EMF in the moving conductor whereas the second one specifies the generated EMF in the conductor. Let us have an in the detailed look at both the laws.

Electromagnetic induction is the invention of extended series of experiments done by the scientists Henry and Faraday. With the results obtained from these experiments, Faraday came up with the end result that there is the induction of electromotive force in the coil when the magnetic flux through the coil is varied in relation to time. With this basic concept, Faraday’s first law was invented. This can be represented in the picture as shown below.

So, when the conductor is kept in the changing magnetic field, there will be the induction of EMF. When the circuit where the conductor is placed is closed, then the generated current is termed as induced current.

Below are the ways to alter the intensity of the magnetic field in the closed-loop:

The electromotive force which is induced in the coil equals the rate of variation in the flux linkage. The flux is considered as the product of flux linked to the coil and the total number of turns present in the coil. The formula is given by

The negative sign represents that the path of the induced electromotive force and variation in the path of magnetic fields have opposite directions. In addition to this, through Lenz’s principle also, electromagnetic induction can be known.

The main experiment that drives Faraday to introduce Faraday’s principle was not that much complicated. By using a few household equipments, the discovering of this law took place. Here we are using a cardboard tube that is shielded with wire in order to form a coil. For this arrangement, a voltmeter is connected through the coil, and the generated electromotive force is read as the magnet made to pass through the coil setup. The setup is shown below.

The observations that were made with this experiment are:

With respect to magnet position and the calculated EMF, the graphical representation is shown as

These are the stable observations of Faraday’s law. Even though the constant magnet might generate a huge magnetic field, there will be null EMF that is induced due to the reason that flux across the coil will not get changed. When the magnet approaches the coil, the flux promptly enhances till the position of the magnet is internal to the coil. When it starts to pass over the coil, then the magnetic flux across the coil tends to decrease. As a result of this, induced EMF will get reversed.

As there are many experiments done by Faraday, the initial three were:

The above experimental observations were tabulated as:

A permanent magnet that has a diameter of 10mm generated a field value of 100mT. The field falls away quickly with respect to distance and is very minimal which is 1 mm more from the boundary. When the magnet is moving at a speed of 1 meter/second across the coil with 100 turns and having a length of 1mm and diameter somewhat more than the magnet. Then what is the value of induced EMF?

1). In order to find the induced EMF, Faraday’s law can be employed. For this one has to be aware of flux change across the coil and how rapidly the variation takes place.

As the magnetic movement is at 1000 mm/sec, it was considered as internal to the 1mm length of coil for 1/1000 sec. By using Faraday’s law,

2). Consider that a field is pointing in the forward direction having a steady strength of B = 5T and a square-shaped strand with one wired loop and length of the sides is 0.1m.

As the square loop travels towards the field, at an ‘x’ direction having a speed of 0.02 m/sec. This signifies that for a certain time period of Δt = 5 sec, the loop will move from being totally out of the field to totally internal to it, and the normal to the field will be associated with the magnetic field at every time interval. This means that ϴ = 0.

Increasing Induced EMF in the Coil

Faraday law is the most crucial and fundamental law in the concept of electromagnetism. This principle has applications across many industries and domains. A few of the applications of faraday’s law are:

The operation of power transformers is dependent on faraday’s law

Finally, this the detailed information about Faraday’s law. This article has provided clear and proper info on Faraday’s law working principle, experiments, laws of induction, applications, and examples. It is also more needed to know how things get related to Faraday’s law?