You are here: Home / Electronics / What is a Ballistic Galvanometer : Construction & Its Working

What is a Ballistic Galvanometer?

A ballistic galvanometer is a current measuring instrument with zero damping torque. It is also called frictionless, damping less galvanometer. For this galvanometer, the damping constant is zero. The basic principle of galvanometer Lorentz Force Law, according to which, force is exerted on the current-carrying coil when it is placed under the influence of the magnetic field. 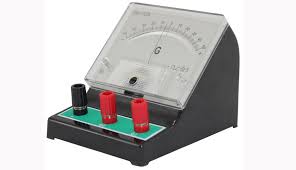 When the force is exerted, the coil moves, as per the magnitude of the current flowing in the coil. That is obviously proportional to the measured current. So whatever is the value of the current to be measured, that current when flows through the coil or a pointer, in this case, a force is exerted on that pointer when it is placed under the influence of the magnetic field. Just like the DC motor, where the current-carrying coil, rotates due to the interaction of fluxes, the concept is the same here also.

The basic structure of the ballistic galvanometer is shown in the diagram. It consists of two magnetic poles North and south. In between the two poles, a coil is placed. The col is the current-carrying coil. In the case of instruments, it may be also a simple pointer, which points towards the measured current value. The pointer when placed under the influence of magnetic poles, a force is exerted on the pointer, due to which it deflects and measures the current. 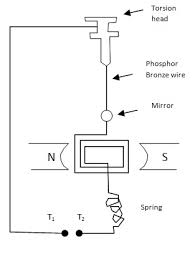 The current measured is given at the ends of T1 and T2. A mirror is used just below the pointer to avoid any parallax errors. It must be noted that we must take the reading such that, the pointer and its image in the mirror, both superimpose together. Any reading by looking at the pointer sidewards introduces parallax errors. Phosphor bronze is used along with the coil. The purpose of phosphor bronze is to minimize any errors due to temperature.

The phosphor bronze has the least coefficient of temperature. So placing a phosphor bronze will reduce the errors. A torsion head is placed to damp any oscillations in the coil. The spring that is connected at the beginning of the pointer, provides restoring torque to the galvanometer. The purpose of restoring torque is to bring back the pointer to its initial position after the supply has been removed. 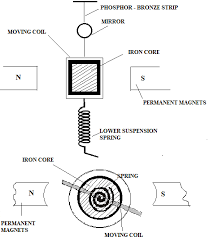 The interaction of these two magnetic fields exerts a force on the pointer. The force exerted is proportional to the current to be measured. So the coil or pointer deflects. Once the coil deflects, it also produces three torques. The first one is deflecting torque. The purpose of this torque is to deflect the pointer in the forward direction.

The basic structure of the galvanometer is shown in the figure. The functionalities of each block are discussed.

The hairsprings are used to make the deflection of the pointer, proportional to the magnitude of the quantity to be measured. It also helps to provide restoring torque to a galvanometer.

It works on the concept of Lorentz Force Law, according to which whenever a current-carrying coil is placed under influence of the magnetic field, a force is exerted on the coil. In this case, when the current flows through the coil and impulsive force is exerted on the coil. The force is proportional to the magnitude of current passing through the coil. To settle the torque to its steady-state position damping torque is used in other moving coil instruments. But in the case of a ballistic galvanometer, damping torque is zero. It’s damping constant is zero. That’s the reason the word ballistic is used.

The advantages of a galvanometer include the following.

The disadvantages of a galvanometer include the following.

The applications of a galvanometer include the following.