You are here: Home / Magnetism / What is Gauss Law : Formula & Its Derivation

The study of electric charge and electric flux along with the surface is the Gauss law. It is one of the basic laws of electromagnetism, which is applicable for any type of closed surface known as a Gaussian surface. This law is explained and published by a German mathematician and physical Karl Friedrich Gauss law in the year 1867. It describes the relation between the intensity of the electric field of a surface and the total electric charge enclosed by that surface. This article gives an overview of gauss law in dielectrics and magnetostatics with a mathematical expression.

What is Gauss Law?

Therefore, the gauss law formula can be expressed as below

Where, Q= Total charge within the given surface, E0 is the electric constant.

This concept is simple and it can be understood very easily by considering the gauss law diagram shown in the figure below.  The total electric flux through the closed surface depends on the charges of the enclosed surface and the charges on the outside of the surface don’t contain any flux. The shape of the surface is considered arbitrarily. Since the total electric flux is independent of the location of charges inside the closed surface. This imaginary surface is called a gaussian surface, which depends on the configuration of charges and the type of symmetry that exists in the charge configuration. Mostly cylindrical and planar surfaces are chosen 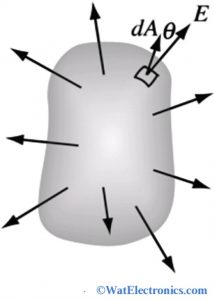 The Gauss law SI unit is given below.

If an electric field is not constant, the electric flux through small surface area dS is given by

An electric field is a region of space around a charged particle or between two voltages; it exerts a force on charged objects in its vicinity.

For an instance, a point charge q is positioned in a cube edge. Then as per gauss law, the flux generated through each face of a cube is q/6 E0

As per this law, the total charge enclosed in a closed surface is proportional to the total flux enclosed by the surface.

Consider if, Φ is the total flux and E0 is the electric constant, then the Total electric charge Q enclosed by closed surface can be expressed as follows

Therefore, the gauss law formula can be expressed as below

Where, Q= Total charge within the given surface, E0 is the electric constant

The gauss law derivation is given below.

Consider a parallel plate capacitor with equal area A and charge density σ and there will be a vacuum between the plates. The following diagram explains this law in dielectrics between the two parallel plates.

Then we can evaluate field vector E0 in the region between the plates using the gauss law. 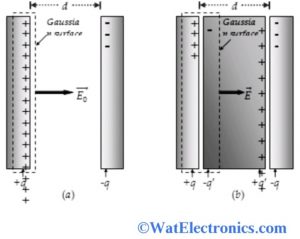 This law for magnetism applies to the magnetic flux through a closed surface. In this case, the area vector points out from the surface.

Therefore the net sum of all currents in the enclosed surface is Null. Gauss law for charges was a very useful method for calculating electric fields in highly symmetric situations. Gauss law for magnetostatics is used very rarely.

This section will let you a clear explanation regarding the significance of Gauss law. Gauss’s law statement is correct and suitable for any closed surface independent of the size or shape of the particular object.

The term Q in the formula of gauss law indicates the summation of all charges which are completely enclosed in the object irrespective of the position of the charge on the surface.

In some of the selected surfaces, there exist both internal and external charges of an electric field. The selected surface for the functionality of gauss law is termed as Gaussian surface, but this surface should not be passed through any kind of isolated charges.

This is mainly employed for the simplified analysis of the electrostatic field in the scenario that the system holds some equilibrium. This will only happen when we choose an exact Gaussian surface.

With the formula of electric flux, the net charge that is enclosed in the surface can be calculated. This can be achieved by charge multiplication for the electron with the entire electrons that appear on the surface. Using this, the free space permittivity and the electric flux can be known.

Rearranging the equation of electric flux and expressing the area as per radius can be used to calculate the electric field.

The advantages of gauss law are as follows

When compared to coulombs law, it provides specific force direction with proper accuracy with its proper general cases.

Gauss theorem is more efficient in all closed objects and surfaces for purpose of finding an electric field and also it will work effectively in the distribution process when compared with coulombs law.

The disadvantages of gauss law are as follows

Following are the important applications of Gauss law

Please refer to this link to know more about Biot Savarts Law MCQs.

Please refer to this link to know more about Gauss Law MCQs.

Thus, this is all about an overview of Gauss law – definition, formula, SI unit, mathematical expression, derivation, diagram, in dielectrics, in magnetostatics, significance, examples with solutions, advantages, disadvantages, and its applications. Here are a few questions for you : What are Maxwell’s equations of electromagnetism? What is Snell’s Law?