You are here: Home / Basics / What is Snell’s Law : Definition & Its Derivation

Initially, Ptolemy a scientist from Alexandria discovered the relation that exists between refraction angles, but his invention failed for a minimal range of angles. In the scope of this Alhazen invented the law of refraction and finally, it was named Snell by the Persian researcher Ibn Sahl. After this many inventors worked upon this law to know the exact principle of this law. Finally, with the enhancement of various electromagnetic and optical concepts, Snell’s law was brought into the modern phase. So, this a brief history of how Snell’s law was discovered. Now, this article explains to you clearly of its definition, derivation, equation, and example.

What is Snell’s Law?

This law defines the degree of refraction and states the relation that exists between the angle of refraction, incidence and also describes the refractive law of indices for the provided media like light, glass, and air. As we all know that when light travels from one medium to another, it will undergo either bending or refraction. So, using Snell’s law the angle of bending can be known and it is called Snell’s law of refraction.

To be clear let us understand what refraction is.

When light travels in a vacuum, it has a straight-line path. But, when it moves from one kind of medium to another kind (such as from light to air), there happens refraction. So, refraction basically defined as light bending when traveled across different mediums.

Assume that, when the speed of human and light are compared, then we walk faster when it is ground medium and the walking speed will be lower when we walk in any pool or lake. This happens because water is denser than that of air. So, the same scenario is applied for light. The speed of travel for light is more than compared with the water medium. So, the bending of light takes place and gets refracted. With the above instance, the incident ray that hits the surface and travels across the air. But, upon hitting light is bent and then called a refracted ray. The normal line is in a perpendicular angle to that of the surface. Every medium has its refractive indexes.

So Snell’s law definition is given that “The proportion between sine values of angle of incidence and angle of refraction is a constant value”. This is clearly expressed as

This is the Snell’s law formula and in the above equation ‘i’ corresponds to an angle of incidence and ‘r’ corresponds to the angle of refraction. And the resultant value is termed as a refractive index. The pictorial representation of the above definition is shown as follows 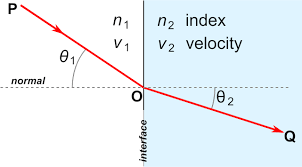 From Fermat’s functional principle, Snell’s law is derived. Fermat’s operating theory defines that light moves in the smallest path and it has less traveling time and given as

It can be done from the Fermat’s principle. As per the above equation, there are two mediums and the phase velocities of these are represented as

Here, ‘c’ represents light speed where the media is vacuum

When the above equation is differentiated, it gets minimized to

By substituting the phase velocity equation, then

n1sinϴ1 = n2sinϴ2 ————This is the final derived Snell’s law equation

Snell’s law can also be derived using Huygen’s principle and from Maxwell’s equation.

1). When the ray has an angle of refraction as 140 and the refractive index is given as 1.2, then the below derivation explains how to calculate the value of angle of incidence.

By using the Snell’s law,

2). When the angle of incidence and angle of refraction is given by 250 and 320, then what is the refractive index?

By using the Snell’s law,

So, these are the few Snell’s law examples

The applications of snell’s law include the following.