You are here: Home / Electronics / What is an ACSR Conductor & Its Working

A physical medium that carries electrical energy from one place to another place is known as a conductor. The minimum conductivity and tensile strength are important factors for transmission and distribution systems. In the earlier days, the copper conductors have used to transmit the energy. But now, these are replaced with stranded hard-drawn 1350 aluminum wires to increase the tensile strength, conductivity, and efficiency. The aluminum conductors are lightweight, economical in design, and also low cost. There are different types of aluminum conductors used in these days. They are AAC, ACSR, AAAC, and ACAR. Here is a brief description of the ACSR conductor.

What is the ACSR Conductor?

Definition: The term ACSR stands for Aluminum Conductor Steel Reinforced. It is one of the stranded conductors composed of one or more layers of hard-drawn 1350-H19 aluminum wire that is on galvanized coated steel core. The ACSR conductors are mainly used in distribution and transmission lines due to their high tensile strength, economical design, less weight, suitable for medium and long periods with fewer supports, and good properties of sag and high voltage overhead lines. The conductivity of the ACSR is higher than the copper conductor.

The ACSR conductor design is simple and very easy. It is designed with one or more layers of aluminum wires, which is hard-drawn 1350-H19. These aluminum wires are around the galvanized steel core. We can consider single wire or strands based on the size of the core. The inner core layer is generally galvanized (coated with zinc) steel core and it is in class A or class B or Class C stranded for protection of corrosion. 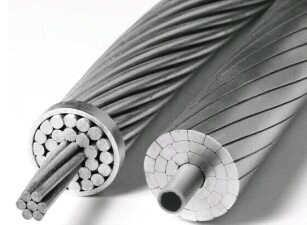 These types of aluminum conductors are available with steel ranging from 6 to 40 percent that is generally used for overhead ground wires, long span installations, etc. These can be designed with a wide range of tensile strengths and against any resistance as per the application.

As the ACSR conductor contains solid steel core wires in the inner layer surrounded by a stranded aluminum wire, these called concentrically stranded conductors. These types of conductors are galvanized or coated with a thin aluminum core to the corrosion of the steel core. Grease is applied to the core for additional protection of corrosion.

It is very simple to recognize the ACSR conductor sizing. Based on the tensile strength, no.of layers or strands of aluminum wires and single or multiple layers galvanized steel core, these conductors are available in wide ranges, which are used for transmission and distribution purposes. They are,

That means, if a conductor contains 6 aluminum strands with a single layer galvanized steel core, then it is called as 6Al/1St. ACSR. Different codenames are used to avoid confusion in numerical values.

The ACSR conductors are made with 7 steel strands that a central core around which contains 2 layers of 30 aluminum strands are placed. So, it is specified as 30 Al/7 St. These types of conductors are mostly used in small sags due to their less weight and high tensile strength. There are different ACSR conductor types based on construction and design. They are

It is also known as a small body ACSR conductor. The aluminum strands are flattened and formed into a segmental shape by pressing the conventional ACSR. Then space will be filled and the diameter gets reduced. This will not affect the mechanical and electrical properties of conductors. We can make this type of indifferent aluminum and steel ratios.

The plastic or fibrous material will be filled between the strands to reduce the corona loss and radio interferences at high voltages. Due to this filling material, the diameter may expand. Hence, it is named as expanded type ACSR conductor. In this type, the paper material is used to separate aluminum strands (inner layer) from steel strands (outer layer). 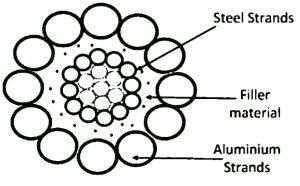 This type of ACSR conductor is mostly used in urban areas and the type of alloy used to make this conductor is called Similac. There will be 0.5% of magnesium, 0.5% of silicon in the alloy and the remaining will be aluminum. This type of have good conductivity, high tensile strength and the alloys used in this type are costly because they are treated in heat.

The ACSR conductor properties include the following.

So, the benefit of the skin effect is, the current flows towards the low-resistivity path of the aluminum, which is on the outside of the conductor. The American Society for Testing and Materials (ASTM), explained the impact of skin effect on ACSR by including the conductivity of the steel core in the calculation of the conductor’s AC and DC resistance.

When the high voltage (alternating) is carried by the conductor, then the distribution of the current is non-uniform on the cross-sectional area of the conductor. This is called the proximity effect. This results in an increase in conductor resistance and also due to the other conductors carries current within the surrounding place. The amount of proximity effect can be determined by frequency, conductivity, and geometry factors.

In ACSR conductors, hysteresis losses are due to the atomic dipoles in the steel. The steel core in the conductor changes the direction due to the induction from 60HZ AC current. These losses can be reduced and negligible by taking even no. of aluminum layers in the conductor. By using two aluminum layers, the magnetic field from opposite paths (right and left) can be canceled and the

Hysteresis losses will be less than in the steel core. But this is not possible in all cases. When we use three or odd no.of aluminum layers, the magnetic field would not be canceled. This magnetic effect due to the odd no.of layers is used in calculating the AC resistance accurately, which is higher than the resistance of the even no. of aluminum layers. But the correction method used for a single-layer ACSR conductor is different from three-layer ACSR.

The advantages of ACSR conductors are given below

Please refer to this link to know more about Transport Layer.

Thus, this is all about the ACSR– definition, design, sizing, types, properties, and advantages. The ACSR conductors are available in wide ranges for transmission and distribution systems as overhead conductors. Here is a question for you, ” What are the disadvantages of ACSR conductors? “