You are here: Home / Magnetism / What is a Flux Meter : Construction & Its Working

What is a Fluxmeter?

Fluxmeter is the device used to measure the magnetic flux of a permanent magnet. This device is in use since the 19th century to measure the magnetic properties of the earth’s magnetic field. There have been considerable improvements in its design and today there are also digital flux meters available in the market. Flux meters are an advanced form of the ballistic galvanometer. This device requires very low controlling torque and has heavy electromagnetic damping.

This induced voltage will be equal to the rate of change of flux. Thus, the flex meter consists of a moving coil placed between the magnetic field of stable permanent magnets. The voltage change observed in the coil is calculated using a calibration meter. This reading gives the amount of flex present in the field.

The circuit of a flux meter is shown in the figure given below. 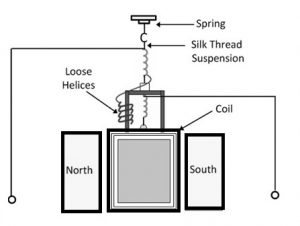 As the flux meter works on the principle of Faraday’s law of electromagnetic induction, it consists of a moving coil and permanent magnets. The coil is freely suspended between the poles of a permanent magnet with the help of a spring and silk thread. This coil moves freely between the poles. Very thin annealed silver strips are used to make helices. Helices are used here to transfer current into the coil. This applied current is used to reduce the controlling torque. Here, the damping caused by air friction is negligible.

This deflection of the pointer is directly proportional to the change in the value of flux. After showing the value the pointer again returns to its initial position. The low resistance circuit caused between flux meter and search coil gives rise to high electromagnetic damping conditions. These high electromagnetic damping stops the movement of the coil when there is a reduction in variation of flux.

Advantages and Disadvantages of Flux meter

Some of the advantages of flux meter are as follows:

The only disadvantage of flux meter is that these are less sensitive compared to other methods used for calculating flux values.

Some of the applications of flux meter are as follows:

Please refer to this link to know more about Measurement and Instrumentation MCQs.

Flux meters can be placed between NMR and ESR when precision values are compared. This device covers a wide range of fields, second to none. These are very flexible instruments but comes with a price as it is a relatively complex device. Different scenarios for using a coil in flux meter are moving coil, flip coil, moving wire, static coil/AC field, moving wire map, rotating coil map, etc. With the increase of ADC, digital voltage integration is used in flux meters to digitize the values. The use of ADC decreases the size, less noise, no leakage current, low-temperature dependence, etc. Digital meters also have their own limitations line dependence on ADC linearity, etc. What technique is used to reduce the controlling torque in flux meters?