You are here: Home / Digital Electronics / What is Digital Potentiometer : Working & Its Applications

Potentiometers are simply termed as POTs and these are even called as variable resistors. The main purpose of a potentiometer is to vary the value of resistance in the circuit. Even these can be employed to vary volume, and dim and brightness of a light. There exist various types of potentiometers such as carbon POTs, wired POTs and plastic POTs. The one type which we are going to discuss today is “Digital Potentiometer”. So, let us discuss more on digital potentiometer definition, how it is designed, types, interfacing with Arduino and applications.

What is a Digital Potentiometer?

A digital potentiometer can be called with various names such as digipot, digital resistor and resistive digital-to-analog-converter. It is a digitally managed electronic device which functions in a similar way of potentiometer, but it is employed using digital switches and signals. In a mechanical type potentiometer, manual controls are used by a person to vary the resistance values. Whereas in digipot, it automatically adjusts its resistance based on the specified condition.

POTs are generally used to vary the value of resistance, but digipots adjust the resistance through digital inputs other than having a rotary wheel or physical slider such as in mechanical POT.

In a digipot, the digital action is performed using a resistor ladder (chain of resistors connected in series). At each ladder step, there will be an electronic switch and only one switch of all switches will be closed at any time stamp. This closed switch helps us in knowing the position/location of the wiper and the ratio of resistance. This design of digital POT is considered as an illustration of linear taper. The total number of steps in this resistive ladder defines the resolution of the device. The below picture shows the digital potentiometer circuit diagram in ladder design. The digital resistors are regulated through up/down signals or by protocols like SPI and I2C.

Digipots are ICs where some of the devices have non-volatile memory and some have no on-boarding memory. The non-volatile memory recalls the resistance setting of the potentiometer. Whereas in the condition on no on-boarding memory, the starting point of the wiper is usually at middle position. As because digipots are small in size, multiple digital potentiometers can be considered in a single chip.

The below tabular column shows the bit count and corresponding step values.

The usual tolerance value in a digital POT is 20%, but these days’ tolerance below of 1% are easily available.

In order to know the working of a digital POT device, its architecture has to be known. As the functionality of the device is only regulation of resistance, the architecture can be easily understood. There are mainly three components in the device which are:

The digital potentiometers are constructed by connecting multiple resistors in a series format in such a way that they form a ladder structure. Every step in the ladder includes a switch which has connection with the potentiometer’s output. The device resistance is known by the total number of steps which means that higher resistance corresponds to more number of steps.

To calculate the number of steps, the bit value of the digital POT is considered. For instance, when there are ‘N’ bits, there are 2N steps. 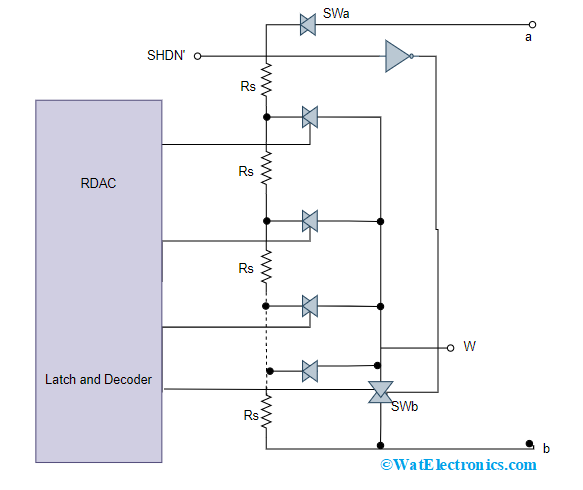 We know that digital devices may comprise of memory unit in order to perform its activities, in the same way as a digipot is digital device it also consists a memory unit. Most of the devices hold volatile memory unit which are used while the operation of the device and this memory unit does not store any previous data once the device is shut down. Therefore, many digital potentiometers initiate from first step onwards when they are switched ON or restarted. Whereas few digipots are also interfaced with microcontrollers or FPGAs so that last position is stored.

These days’ digital potentiometers are built where they have non-volatile memory unit and also capable of storing last position so that the previous position can be retained after the device is shut down.

This section is the crucial part in the device and this is the section which is not present in conventional type of potentiometer. Here, the signal is provided from microcontroller such as Arduino in order to adjust the resistance of the digipot. In every potentiometer there exists either synchronous or asynchronous series bus acting as interface and few digital POTs function by using front panelled switches or control logic. 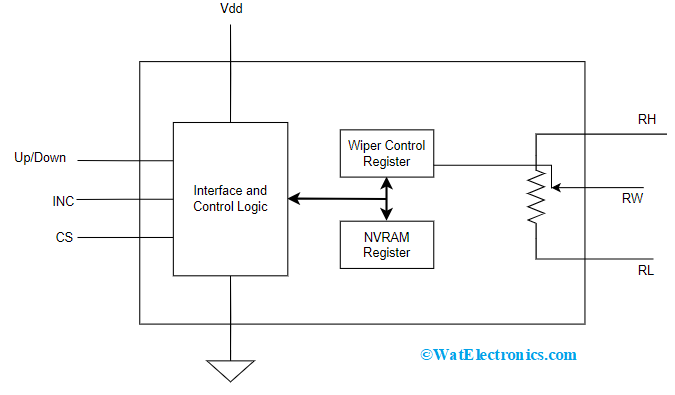 The best employed asynchronous bus is used to communicated information on the UP/Down counter. The above picture depicts the digipot having an increment/decrement interface. This bus has three signals which are:

The digital potentiometer can be interfaced either with I2C or SPI peripherals.

This section explains interfacing a digital potentiometer with X9C103S with Arduino. The X9C103S is a digipot device where its resistance can be varied using a microcontroller. It has 3 pin output and consists of 99 resistance components and the last resistor can be regulated through a 3-wired interface. The X9C103S consists of 8 pins and the pinout description can be explained as follows:

The below picture and code for Arduino connection with X9C103S are shown as follows: 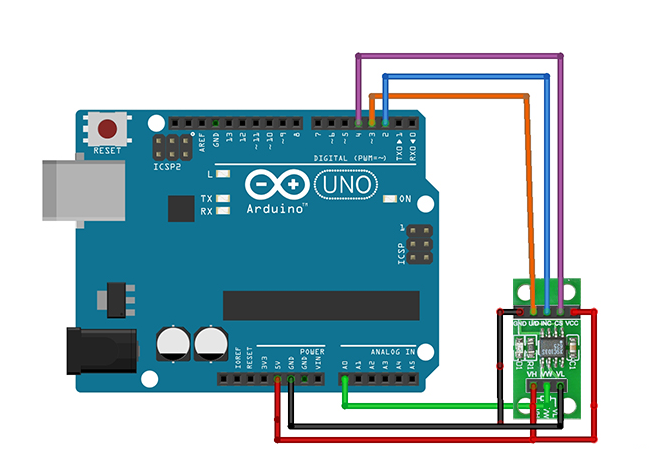 Here are the few types of digital POT devices which are explained as follows:

Few of the NVM type digipots are AD5245 and AD5246. Here, the settings are lost when the power is removed from the device. In order to  store the desired setting, a non-volatile on chip memory device is required. Whereas, there are also few volatile digipots having a power on preset feature. 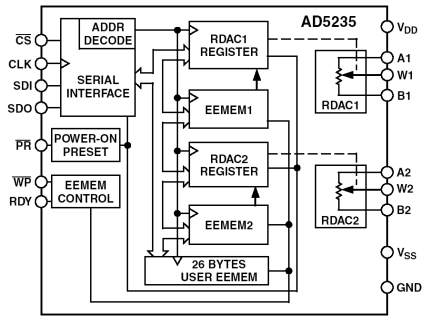 As per the block diagram, when any modifications are done to RDAC register, the new setting values are stored in the E2MEM. Later when the system power is ON, automatically data gets transmitted to the RDAC register. The EEMEM even be recovered via direct programming and preset pin controlling. With the commands of linear step increment/decrement, the RDAC settings can be moved UP/Down by only one step at an instance.

In order to get logarithmic variations in the wiper settings, a right/left bit shift command alters the level either by +6 or -6 dB steps.

The AD5172 is a dual channel one time programmable digipot having 256 positions. In order to gain memory of the resistance setting activity, this device use fuse link technology. 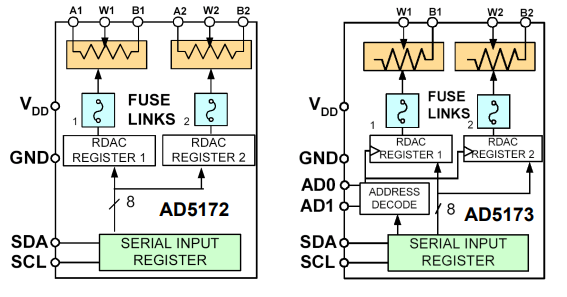 The AD5172 device is programmed with a 2 wired I2C synced digital control. This permits for infinite adjustments in before the resistance value is permanently adjusted. When the OTP is activated, a command of permanent fuse blown is transmitted after recognizing the final value, so that wiper position is locked at the specified setting.

This device has an exclusive temporary OTP overwriting feature which permits for more adjustments if required. With this unique feature, the AD5172 is used in multiple active control applications having user defined presets.

The calibration of digital potentiometer can be achieved with OTP type of digipot where it calibrates the DC bias point  of the RF power amplifier and the calibration can be programmed with no requirement any external controlling devices.

This section explains on the differences between a digital potentiometer and digital-to-analog converter.

In today’s electronic systems, there are extremely endless applications of the digital potentiometer. A few of those are:

Automotive industry – Used for calibration of sensors, regulation of instrumentation and actuators and adjustments in the navigation displays.

What are the advantages of using a digital potentiometer over other types of pots?

A: The main advantage of using a digital pot is that you can use it with an Arduino or Raspberry Pi without needing any additional components. This makes it ideal for projects involving those devices!

How do you connect a digital potentiometer to an Arduino or Raspberry Pi?

Can you use a digital potentiometer to measure voltage?

Yes, you can use a digital potentiometer to measure voltage. However, you will need an ADC (Analog-to-Digital Converter) to convert the output of your digital pot into a number.