You are here: Home / Communications / What is I2C Protocol : Architecture, Timing Diagram & Its Applications

In the process of establishing a connection between multiple devices in a microcontroller, the data and address line of every single device would take up important pins in the microcontroller which leads to more traces on the PCB board. And also it requires more components which further results in cost enhancement of the system and they are even easily subjective to noise and intrusion. So, to stay back from this complication Philips introduced IC buses which were also called I2C in the year the 1980s. So, today the main agenda of this article is to focus on giving an introduction to the I2C protocol, how it works, it’s programming and many other concepts related to it.

What is I2C Protocol?

I2C is termed as the abbreviated form of Inter-Integrated Circuit. This is a type of communication bus which is mainly designed and developed to establish inter-chip communication. This protocol is a bus interface connection that is embedded into multiple devices to set up serial connections. I2C is considered to be the most prominent chip-to-chip communication protocol as it holds the features of both UART and SPI.

The features of the I2C protocol are:

This is a multi-slave and multi-master communication protocol that gives the flexibility of connecting multiple IC at a single instance of time to a single bus. In general, in I2C devices, the master takes the initiation of establishing communication whereas in the case of multi-master, only one master holds the possession of setting up communication.

The working of the I2C communication protocol happens through open drain lines which are Serial Data (SDA) and SCL (Serial Clock). Initially, both the SDA and SCL lines are pulled high and the bus mainly functions in two modes which are Master and Slave.

Every bit which is transferred on the serial data line gets synchronized by HIGH to LOW pulse for every clock signal that is received on the serial clock. The SDA line will not change when the SCL is in a HIGH state and it is changed only when SCL is in a LOW state. As discussed SDA and SCL are open-drain lines, they require of pull-up resistor to make them high as because the devices on the bus are in the active LOW state. 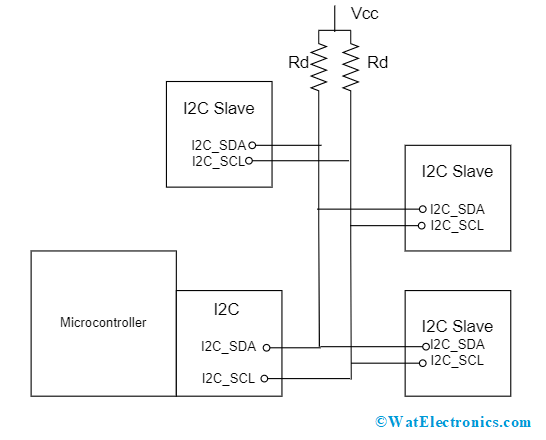 Here, data transfer takes place in the form of packets and each packet consists of 9 bits. The sequence of bits is shown below:

The switching of serial data line takes place from high to low voltage level and low to high voltage levels before and after the serial clock line switches from HIGH to LOW and LOW to HIGH. The below picture shows the switching of SDA and SCL lines.

The acknowledge/no-acknowledge bit is the subsequent bit of every frame in a message. When data/address was successfully transmitted, then the ACK signal gets back to the sender from the receiver device.

When the ACK bit is detected by master from slave it indicates that the first data frame can be transferred. This data frame is of 8-bit length. After the data frame, ACK/NACK bit detects the successful transmission of the frame. Once the transmission was successful, then the next data frame will be ready to transmit.

Please refer to this link for I2C Protocol MCQ

Once all the data frames are received, the master sends the STOP signal indicating to stop the transmission.

The below I2C protocol timing diagram gives a clear idea of the working of the protocol.

I2C Protocol Programming in C for 8051

Interfacing of I2C protocol EEPROM with 8051 is not hard. The functionality of interfacing is to transmit WRITE signal and then data/address buses. Here, EEPROM is used for data storage. The lines in EEPROM are managed by the I2C protocol-supported drivers. Through serial clock and serial data lines, the RD/WRT activities of EEPROM are performed. Here, is the C code for interfacing.

Potentiometers are used at each Arduino board in order to know the transmission values from master to slave and vice versa. So, by altering the potentiometer, values can be determined. Few of the wiring library functionalities to be known here are explained below:

Wire.begin(address) – This initiates the wiring library and connects the bus either as master or slave.

Wire.read() – Used to read the information which was received either from slave or master device.

Wire.write() – Used to write the information to slave or master device.

Wire.beginTransmission(address) – With the provided slave’s address, this library initiates the transmission to I2C components.

Wire.onRequest() – This library is called when the master requests information from the slave device.

Wire.onReceive() – This library is called when the slave receives information from the master device.

Wire.requestForm(address, quantity) – This library helps when the master requests bytes from the slave.

At pin A0, analog input is provided which ranges between 0V – 5V, and convert the analog value to digital value (0 to 1023). The converted value is further converted to 7-bit values (0 to 127) because only 7-bit information is transmitted for I2C communication. And the next process takes place at A4 and A5 pins of Arduino.

The specifications allow manufacturers to design I2C devices to be in compatible with the bus requirements. Below is the I2C protocol specification which is generally considered:

Difference between UART, SPI and I2C

The below tabular column compares the features of various kinds of interfaces by considering multiple aspects such as the interfaces data rate, type of communication, complexity, and many others.

The applications of Inter-Integrated interface can be found in the devices that operate at less speed. A few of those are:

Please refer to this link to know more about  Network Protocol &  Modbus.

This is the whole concept of the I2C protocol. This article has focused on explaining the I2C protocol definition, working, timing diagram, advantages, and applications. Know further on how I2C protocol Verilog code can be written?