You are here: Home / Articles / Arduino Technology Architecture and Its Advantages

An Arduino board is a one type of microcontroller based kit. The first Arduino technology was developed in the year 2005 by David Cuartielles and Massimo Banzi. The designers thought to provide easy and low cost board for students, hobbyists and professionals to build devices. Arduino board can be purchased from the  seller or directly we can make at home using various basic components. The best examples of Arduino for beginners and hobbyists includes  motor detectors  and thermostats, and simple robots. In the year 2011, Adafruit industries expected that over 3lakhs Arduino boards had been produced. But, 7lakhs boards were in user’s hands in the year 2013. Arduino technology is used in many operating devices like communication or controlling.

A typical example of the Arduino board is Arduino Uno.It includes an ATmega328 microcontroller and it has 28-pins 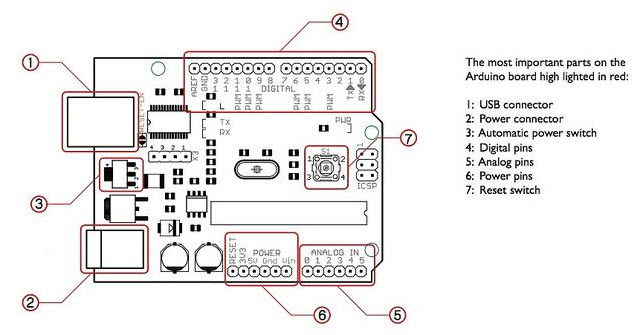 The pin configuration of  the Arduino Uno board is shown in the above. It  consists of 14-digital i/o pins. Wherein 6 pins are used as pulse width modulation o/ps and 6 analog i/ps, a USB connection, a power jack, a 16MHz crystal oscillator, a reset button,  and an ICSP header. Arduino board can be powered either from the personal computer through a USB or external source  like a battery or an adaptor. This board can operate with an external supply of 7-12V by giving voltage reference through the IORef pin or through the pin Vin.

It comprises of 14-digital I/O pins, each pin take up and provides 40mA current. Some of the pins have special functions like pins 0 & 1, which acts as a transmitter and receiver respectively. For serial communication, pins-2 & 3 are external interrupts, 3,5,6,9,11 pins  delivers PWM o/p and pin-13 is used to connect LED.

Analog i/ps: It has 6-analog I/O pins, each pin provide a 10 bits resolution.

Aref:  This pin gives a reference to the analog i/ps.

Reset: When the pin is low, then it resets the microcontroller.

Basically, the processor of the Arduino board uses the Harvard architecture where the program code and program data have separate memory. It consists of two memories such as program memory and data memory. Wherein the data is stored in data memory and the code is stored in the flash program memory. The Atmega328 microcontroller has 32kb of flash memory, 2kb of SRAM  1kb of EPROM and operates with a 16MHz clock speed. 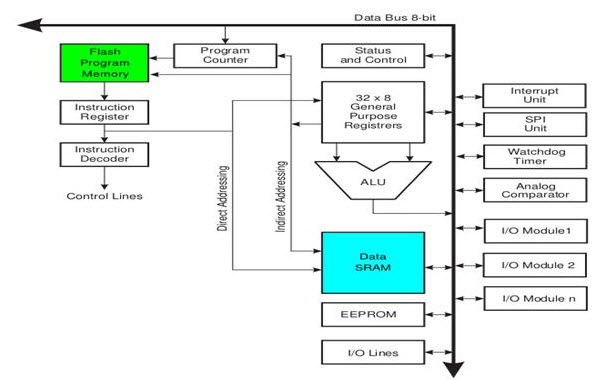 How to program an Arduino?

The main advantage of the Arduino technology is, you can directly load the programs into the device without the need of a hardware programmer to burn the program. This is done because of the presence of the 0.5KB of boot loader, that allows the program to be dumped into the circuit. The Arduino tool window contains a toolbar with a various buttons like new, open, verify, upload and serial monitor. And additionally it comprises of a text editor (employed to write the code), a message space (displays the feedback) like showing the errors, the text console, that displays the o/p & a series of menus just like the file, tool menu & edit. 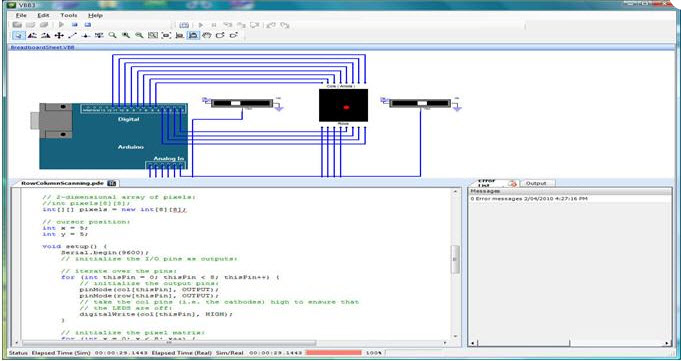 Please refer to this link for Arduino MCQs

The main concept of this project is to design a robot using ultrasonic sensors to avoid the obstacle. A robot is a machine and it is a combination of programs instructions and motors. It can perform some task with some guidance or automatically. This robotic vehicle has an intelligence which is built  inside of the robot. When a obstacle problem comes ahead of it then, it guides itself. This robot is designed with a microcontroller from Atmel family of Aduino board. 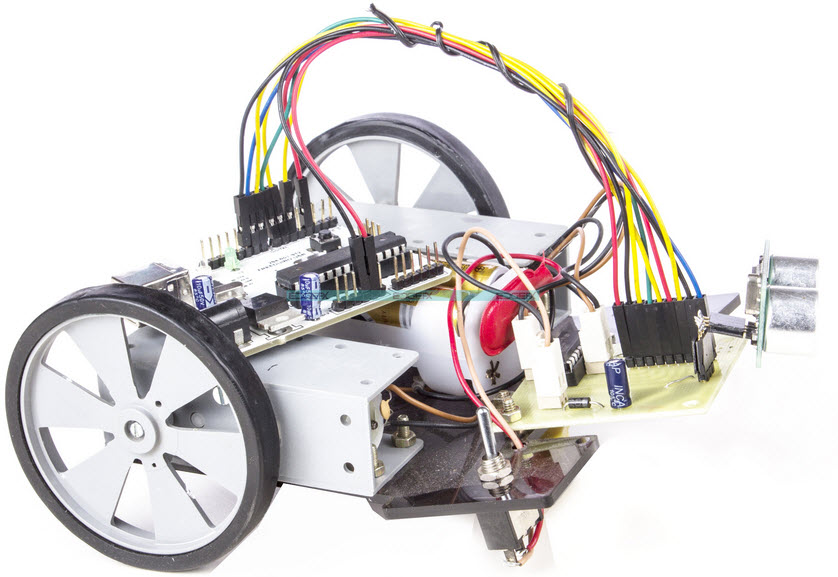 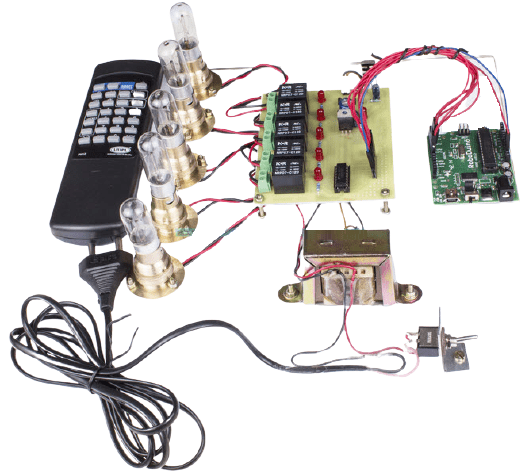 The main goal of this project is to design a home automation system using an Arduino board with Bluetooth being controlled remotely by any Android OS based smart phone. This home automation system provides a modern solution with smart phones.In order to achieve this, a Bluetooth device is attached to the Arduino board at the receiver side and while on the transmitter side, a GUI application on the smart phone sends ON/OFF commands to the receiver where loads are connected. By touching the particular location on the graphical user interface (GUI), the different loads can be remotely turned ON/OFF via this technology. When we touch the exact location on the GUI, then the loads can be turned ON/OFF remotely. The loads works with an Arduino board through Thyristors and Opto-Isolators using triacs. 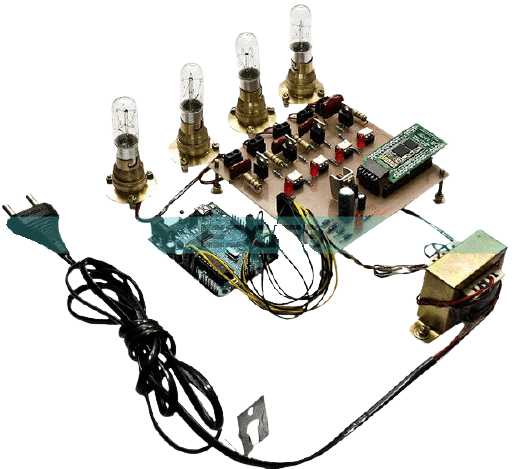 This project is built with a set of resistors to represent the cable length in kilometers and fault creation is designed with a set of switches at every known kilometer to cross check the exactness of the same. When a fault occurs at a particular distance and the particular phase is displayed on an LCD which is interfaced to the Arduino board. 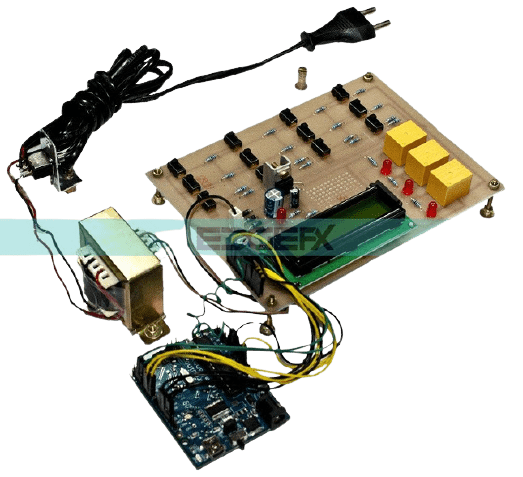 This is all about Arduino technology and its applications. So this is the basic information regarding Arduino which can be used for many applications like controlling of actuators for example generators, motors & based on the  input of the sensors. Moreover, any questions regarding this topic or electrical and electronic projects, please give your feedback by commenting in the comment section below. Here is a question for you, What is the physical location of the U1A symbol on Arduino Uno?