You are here: Home / Electronics / What is a Trimmer Resistor : Working & Its Applications

Trimmer resistors are also called trim pots or variable resistors that allow you to manually fine-tune the resistance in a circuit. They’re often used for calibration in applications like amplifiers and radios to make sure that the circuit output is as close to the ideal level as possible. In this article, we’ll discuss everything you need to know about awesome little components like a trimmer resistor and how they work, how they’re manufactured, and how you can use them in your own projects.

What is a Trimmer Resistor/Definition?

A trimmer resistor is a resistor that can be adjusted or “trimmed” to an exact resistance by turning a screw. This type of resistor is often used in circuits because it allows for adjustments in circuit performance. The adjustment is made by using a tool, such as a screwdriver, to turn the dial or knob on the device. The Trimmer resistor symbol is shown below.

Trimmers are normally manufactured as single-turn or multi-turn components and may be top-adjusted or side-adjusted. Multi-turn trimmers can be used with automated test equipment (ATE) and are also available with anti-rotation features that prevent the adjustment from being changed accidentally.
Trimmer resistors are usually used in applications where adjustments need to be made during production, or where the effect of manufacturing tolerances needs to be compensated for during the operational life of a product.

This resistor includes three terminals where each terminal and its function are discussed in the following pinout configuration. 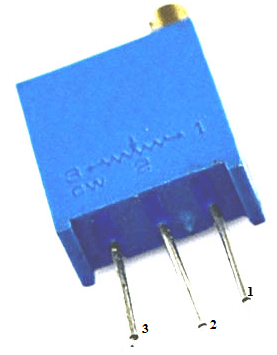 The features and specifications of the trimmer resistor are discussed below.

The main body of the resistor contains a strip of conductive material that moves when it is turned. This movement physically changes the resistance of the resistor by increasing or decreasing the amount of contact between the conductor and the surface it rests on. This changing resistance can then be used to control the electrical signals or components within circuits. 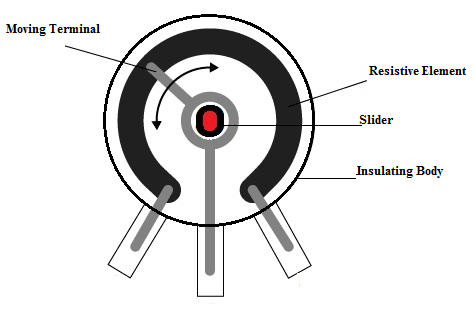 The body of the resistor is constructed of three main parts:

This terminal is usually anchored in place and does not move when the resistor is adjusted. It is connected to an external part of the circuit that supplies power or electrical signals.

This terminal is attached to the adjusting shaft that can be turned to make micro-adjustments. It also connects to an external part of the circuit that receives power or signals from another component in the circuit.

This element is mounted inside the resistor and connects both terminals together. It provides resistance between the two terminals and can be adjusted by turning the moving terminal.

These are typically small in size and have large resistance values. Most of them are surface mount components, though some through-hole versions are still available. They may also be sealed for use in harsh environments or covered with a protective cap to prevent unwanted adjustment.

There are many different types of trimmer resistors, varying in size, resistance value, power rating, and environmental sealing abilities.

These are the most common types of trimmer resistors:

These have a screw that turns about 300 degrees in either direction in order to adjust the resistance value. This type of resistor has a resistance range of 10Ω-1MΩ and can be adjusted in increments as fine as 0.01Ω. It can handle up to 1W of power. 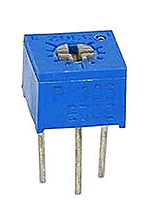 These work like single-turn trimmers, except they have multiple turns—usually five—to give them more adjustment range (50Ω-1MΩ). They can also be adjusted in increments as fine as 0.01Ω, but they can only handle 0.25W of power, making them less powerful than single-turn trimmers. 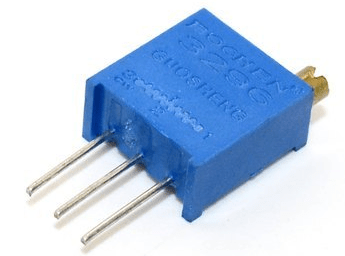 Surface mount type resistors are a type of trimming potentiometer that has been specially designed for surface mounting onto a printed circuit board. They are used in applications where the voltage or current needs to be adjusted, and their small size makes them suitable for small electrical equipment such as mobile phones. 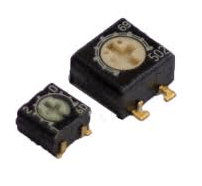 The working principle of this resistor is very simple. The resistance element is a thin film deposited on an insulator. If the contact end of the thin film is pressed against the external connection pin, the current can be passed through, but if it is not pressed, the current cannot flow.

How are Trimmer Resistors Used?

Trimmer resistors are used primarily when the exact resistance value of a component is unknown or cannot be determined before the circuit is assembled and powered on. For instance, if you add an amplifier to your circuit, you may need to adjust the resistance value of your resistor to get rid of any background noise or static.

Generally, It is a variable resistor and it is available in the potentiometer form (pot) known as trimpot. This component includes three terminals but it can be used as a two-terminal resistor by connecting the wiper to one of the remaining terminals, otherwise simply using two terminals.

The required electronic components of this circuit mainly include a battery, variable resistor, backup resistor, and LED. The circuit connections can be done like the following by using these components.

For instance; a red color LED with a 9V battery and Vf =2V & a 9V battery. If the trimmer is set to 50 ohms, then we will have the flow of current I=7V/50Ω =140mA which is far beyond the 20 to 30mA threshold of the light-emitting diode. Similarly, if the potentiometer is set to 0ohms and the backup resistor is not used then the LED will blow.

The advantages of a trimmer resistor include the following.

The disadvantages of a trimmer resistor include the following.

The applications of trimmer resistors include the following.

Thus, this is all about an overview of the trimmer resistor. Sometimes, these are also called trimmer potentiometers, trim pots, or a kind of adjustable potentiometer or variable resistor. Generally, a tiny screw on the resistor is used to adjust the resistance. These components are calibrating devices, so their range of resistive is frequently very small & very precise settings can be obtained during adjustment. Here is a question for you, what is a rheostat?