You are here: Home / Communications / What is Serial Peripheral Interface : Working and Its Applications

What is SPI Protocol?

SPI protocol is the communication protocol that is used for connecting low-speed devices and the devices can be RFID card readers, ADC, 2.4 GHz wireless transmitters and receivers, and memory card, readers. All these devices work with SPI protocol to establish communication with microcontrollers. This is the full-duplex synchronous serial communicating protocol where the information transmission happens concurrently from both directions.

The unique feature of this protocol is that the information transmission takes place without any intermissions. It follows a continuous stream for data transfer of ‘n’ number of bits.

Communication through SPI protocol takes place in a master-slave relationship. The Master acts as a regulatory device and the slave works as per the instructions received from the master. The easier configuration in SPI is a single master and single slave system whereas one master system holds the ability to control more slaves as well.

The clock signal is termed as serial clock SCK/SCLK which is generated by the master. The data transmission between slave and master is matched with this clock signal. The SPI devices have the capability of supporting a broad range of clock frequencies than that of I2C protocols. The interfacing between master and slave can be done as

As discussed that SPI device can work with one slave or multiple slaves, but has only a master. Let us look at the detailed operation and data transmission in this protocol.

The CLK synchronizes the master output with the sampling bits of a slave. For every clock cycle, a single bit of data will be transmitted where the data transmission speed is known as the clock signal frequency. Always, the communication in SPI devices is started by the master as it generates the clock signal.

The CLK in the SPI device can be altered by clock phase (CPHA) and clock polarity (CPOL) properties. Apart from setting the clock frequency, the master should also synchronize CPHA and CPOL corresponding to the data.

Clock polarity decides the clock signal polarity. Using an inverter, the polarities can be altered. CPOL indicates that the clock signal’s base value is ‘0’ so that the idle state is ‘0’ and the active is ‘1’.

The clock phase decides the data timing corresponding to clock pulses. CPHA indicates that the clock signal’s base value is ‘1’ so that the idle state is ‘1’ and the active is ‘0’. 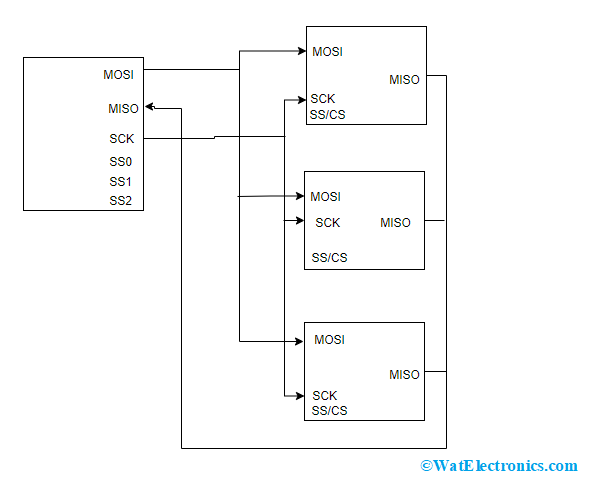 The master transmits data to the slave in a bit-by-bit manner using the MOSI line. The slave receives information from a master at the MOSI pin. Data transmission from master to slave is initiated with MSB bit.

The slave signal can also transmit data to the master using the MISO line. Data transmission from slave to master is initiated with the LSB bit.

Initially, the master configures the clock to the frequency level (few MHz) which is supported by the slave. Then, the master chooses the slave device by making voltage level ‘0’ on the selection line. When there is a need for analog to digital conversion, then there will be a waiting period so the master has to wait before sending the clock cycles.

The SPI protocol timing diagram for data transmission is as follows:

When all the register bits are shifted in and out, it represents the shift register values that are exchanged between slave and master. When there is a requirement for the exchange of more information, then the reload takes place in shift registers, and the operation iterates. When the transmission completes, the master stops switching the CLK signal and deselects the slave.

This functionality is explained in the below SPI protocol block diagram.

To know the performance of serial peripheral interface communication between two Arduino boards, one board is configured as a master and the other board as a slave device. Master transmits logic ‘HIGH’ when the user presses the push knob. Then slave receives information from the master and as per the received information, it decides either to turn ON or turn OFF the display of the Arduino board. 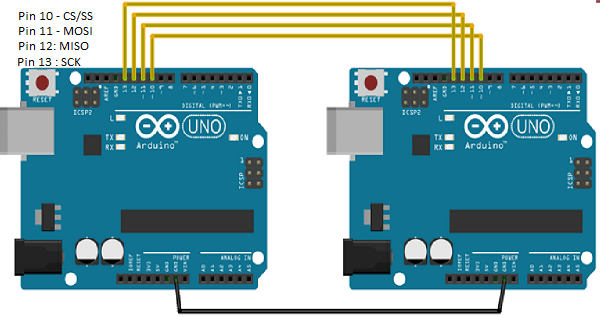 The advantages of SPI protocol include the following.

The disadvantages of the SPI protocol include the following.

A few of the applications of SPI protocol are as follows:

Please refer to this link to know more about Modbus.

This is all the concept of SPI protocol. Here the article has explained the serial peripheral interface working principle, its specifications, architecture, timing diagram, and applications. Know in detail how to connect SPI in daisy chain configuration?