You are here: Home / Electronics / What is Potentiometer : Working & Its Applications

Potentiometers are variable resistors that were first invented to amplify radio signals. You could find it in an old radio or a stereo system as a volume control. Earlier it was named ‘multiplier’ by Charles William Siemens and but nowadays it is commonly called ‘POT’. It is used today in both electrical and physical applications and is an integral part of electronic circuits, motor controls, and many other areas. In this article let’s look into different types of the potentiometer, its construction, advantages, applications and disadvantages.

What is a Potentiometer?

The potentiometer is three terminals device connected to a sliding electrical contact. If only two terminals are used it acts as a variable resistor or rheostat and if three-terminal are used then a voltage divider. 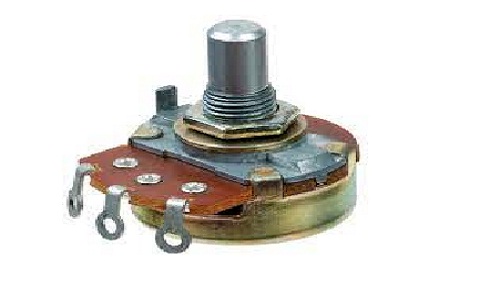 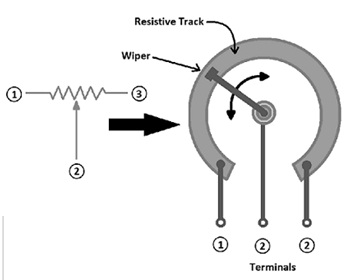 The moving contact may be a conductive element, or, more commonly, a strip of semiconductor. The material and the dimensions determine how much resistance will be presented by the device.

There are three main types of potentiometers: rotary, slide, and trimmer. Each type is available in a wide range of resistance and power values.

Rotary potentiometers, also known as pots, are two-terminal variable resistors with three connections. The two outer connections are the end terminals, which carry the full circuit voltage. The middle connection is the wiper terminal, which moves between the end terminals as the knob is rotated. Rotary pots come in single-turn and multi-turn versions. 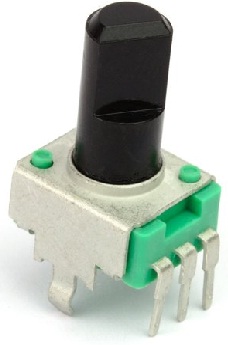 The multi-turn versions provide a finer degree of adjustment than a single-turn pot. When the potentiometer is turned, the voltage changes from 0 to 5V. The voltage is a ratio of the number of turns and the total number of turns. For example, if you turn the knob halfway, it will produce 2.5 V.

Slide potentiometers also called sliding or fader pots, are two-terminal variable resistors with three connections. Slide pots differ from rotary pots in that they have a fixed resistor body and a contact slider that moves along the body to make contact with the resistive element. The sliding contact is attached to a lever that can be pushed or pulled to change its position on the resistor body. This type of pot is commonly used as audio level controls and volume controls for electronic devices such as amplifiers, radios, and stereos. 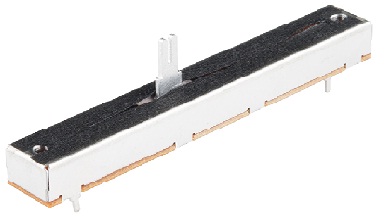 Trimmer potentiometers or trimmer resistors are small potentiometers that are mostly used to make adjustments to electronic circuits. The trimmers have a nominal power rating of 0.25W and are available with the same resistance values as their larger counterparts.

Trimmers are often used as preset controls to allow a user to set a circuit up once and leave it, or to allow an engineer to calibrate a circuit during manufacturing. While many trimmers have just three terminals, some have four terminals, with the extra terminal being connected to the adjustment mechanism rather than one end of the resistor element itself (this allows for better shielding against dust and moisture).

How to Select a Potentiometer?

Connecting a Potentiometer to an Arduino Board

Controlling a potentiometer with your Arduino is quite easy because it only requires one analog input pin.

The same principle works for any type of potentiometer regardless of its total resistance; simply divide its resistance by 2 to find its midpoint. 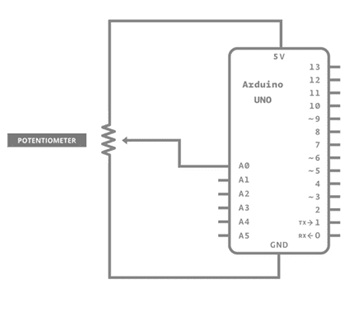 To control a potentiometer as an analog input with your Arduino board, you’ll need to connect three wires: GND (ground), +5V (power), and SIG (signal). You can connect these wires directly to your Arduino board’s pins if you have enough free pins available, or connect them through jumper wires to pins on a breadboard if not.

The ground wire is connected directly to the GND of the Arduino board.

Below is the code to read a potentiometer value from Arduino processor.
Void init_serial_interface()
{
Serial.begin(9600);
}
Void mainloop()
{
int read_analog = analogRead(A0); // The read the value of POT connected to the A0 pin of the processor.
Serial.println(read_analog); // output the value to the serial out.
delay(10);
}

The advantage of the potentiometer include the following:

The main disadvantages of potentiometer are:

The applications of potentiometer are;

Measuring the internal resistance of a cell: The voltage is applied across the cell and the current is measured by an ammeter. The voltage drop across the potentiometer is altered until the deflection on the galvanometer equals zero.

Controlling LED Brightness – This is the most common use of a potentiometer, in this application we use a potentiometer to control the amount of power supplied to an LED.

Varying the speed of DC motors – Using a potentiometer we can adjust the voltage supplied across the motor, this voltage adjustment will then change the speed of the motor.

Controlling volume on speakers – Potentiometers are used to control how much power is supplied to speakers, they are used more commonly in car stereos but can also be found on computer speaker systems.

Please refer to this link for Potentiometer MCQs.

In a nutshell, the potentiometer has become an integral part of any functionality, one cannot overlook its importance. It is a valuable component which contributes in designing useful and progressive items. This piece of equipment offers a big role in making the circuit operate effectively and makes electrical energy conform to specified requirements of the user. Here is a question for you, what is a variable resistor?