You are here: Home / Communications / What is Modbus : Working & Its Function Codes

In 1979, a data communication protocol called Modbus was developed by Modicon (now Schneider Electric) and it is used along with its PLCs (programmable logic controllers). It is an industrial standard protocol and it is mainly used in process and factory automation. Now it is commonly referred to as a de facto communication protocol to connect various industrial electronic components. In the electric power industry, this is used to connect a supervisory computer with RTU (remote terminal unit) in SCADA systems (data acquisition systems) and supervisory control systems. It is an open protocol and anyone can access it. The registered trademark of Modbus is Schneider Electric USA, Inc. this article gives an overview of Modbus communication protocol, architecture, versions, and implementations.

The serial communication protocol developed by Modicon in 1979 for usage with its PLCs (programmable logic controllers) is known as Modbus. That means it transmits the information or data over serial lines between multiple electronic devices. It is referred to as an open protocol so that manufacturers can utilize it without paying any royalties. It provides client/server or master/slave communication between the electronic devices connected on various types of networks or buses.

It is a request/reply type protocol and the services provided by this are specified by the function codes. It is generally referred to as application layer message protocol because it is placed at layer 7 of the OSI reference model. The specifications of various modes are testing, software, code interface, and many more.

The comparison between Profibus and Modbus is given below.

This type of communication protocol is widely used by most manufacturers throughout many industries. It transmits signals from control devices and instruments to main data controller systems. For example, temperature and humidity values measured by the system are communicated through Modbus to a computer. It is used to connect a supervisory computer with RTU in supervisory control and SCADA systems (data acquisition systems). There are various protocol versions for both serial lines and Ethernet.

Since the Modbus is a master/slave communication protocol, one device is operated as a master and all other devices operate as a slave. The slave can’t provide information independently and voluntarily and should wait till it asks for it. The master writes the data to device registers (slave) and then reads the data from device registers (slave). The address of the register or reference of the register is usually within the context of the slave register. 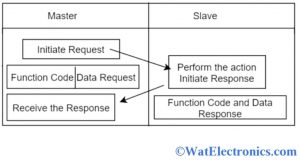 How does this Communication Protocol Work?

The working of Modbus communication protocol depends on the transactions between master and slave registers. It contains one master, which controls all the transactions with multiple slaves. The slave responds to the request coming from the master to read or write from/to data to the slaves.

The architecture of Modbus TCP/IP or Modbus communication protocol using TCP is shown below. This TCP/IP is implemented on an Ethernet network and all the data interactions from client/master are forwarded towards server/slave via IP address. The master/slave interactions of this protocol are a request/response type protocol. Communication always occurs in pairs. That means, one device sends or initiates a request and waits till it receives a response from another device.

The initiating devices act as a master and it is responsible for every interaction initiation. The master or client is an HMI (human-machine interface) or supervisory control or SCADA system. The slave is a PLC (programmable logic controller), sensor, or PAC (programmable automation controller). The data or information of these responses and requests and the layers of the network, where the messages are sent are determined by the different layers of protocol. 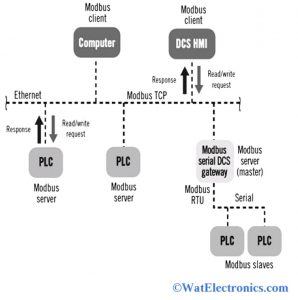 Please refer to this link to know more about Modbus MCQs

Protocol versions of Modbus will exist for Ethernet and serial port and other protocols that support the Internet protocol suite are discussed below.

It is used in serial communication to represent binary data for communication protocol. The format of RTU follows the data/commands with a CRC (cyclic redundancy check) checksum as a mechanism of error check that ensures the reliability of information or data. This type of protocol version is implemented most widely. Continuous transmission of Modbus RTU messages is done without any inter-character delays. The messages of Modbus are separated or framed by idle periods.

It is also used in serial data communication. To achieve protocol communication, it utilizes ASCII characters. The format of ASCII uses longitudinal redundancy checks as a checksum. The messages of Modbus ASCII are framed by leading colon (:) and trailing newline (CR/LF).

This type of protocol version is used in data communications over networks of TCP/IP by connecting through port 502. There is no need for checksum calculations because the checksum protection is provided by the lower layers of the network.

This type of protocol version is different from Modbus TCP. The checksum mechanism is included as a payload with Modbus RTU.

Some of the experiments had been done with this protocol version on IP networks to remove the overheads needed for TCP.

This type of variant differs from other variants and acts as proprietary to Schneider Electric. Supports peer-to-peer communication between various masters. A dedicated co-processor is required to handle HDLC-like token rotation.

Every node is isolated using a transformer, which enables edge/transition triggering instead of level/voltage triggering. It required a twisted pair at 1Mb per second and special hardware to connect MB+ to a computer. A special card made for the PCI, ISA, or PCMCIA bus.

This type of version is an extension to standard Modbus to support the flow of data. It was designed for process control in Pemex oil & Gas Company.

It was introduced by Enron Corporation to support 32-bit floating and integer variables and historical flow of data. It is an extended version of the standard Modbus where data types are mapped using standard addresses. The historical data should meet the requirements of an American Petroleum Institute (API) standard industry to store the data.

The Modbus protocol was introduced by Modicon (Schneider Electric) in 1979 for serial communication. It is the most widely used common protocol in the industrial sector for industrial applications. The full protocol is implemented in the NRT as a partial implementation. The initial implementation of this was a single protocol built on top of the serial and cannot divide into multiple layers.

Later on, various application data units (ADU) were developed either to change the packet format over a serial line or to allow the TCP/IP and UDP (user datagram protocol) networks.

At present, the implementation of this protocol is done using TCP/IP over Ethernet, asynchronous serial transmission over a wide range of media, Modbus plus (MB+) which is a token-passing network with high speed.
All the protocol implementations have some variations when compared to standard protocol. The most common variations are given below,

The Modbus applications are listed below

Please refer to this link to know more about Transport Layer.

Please refer to this link to know more about PLC MCQ’s.

Thus, this is all about the basics of Modbus – definition, differences with Profibus, working of communication protocol, protocol versions, function codes, implementations, and advantages. The purpose of this is to transmit data between various electronic devices over serial lines or Ethernet and it is most widely used in industrial applications. Here is a question for you, “What is Modbus RTU?”