You are here: Home / Embedded Systems / What are the Differences Between Microprocessor and Microcontroller?

In the past, the computers design consists of multiple small and medium scale circuits. The circuits made were bulky and complicated to analyze. The enhancements in the electronic industries and improvements made in microprocessors result in the reduction of cost and make it popular to use in various applications. The development of MOSFET has originated the path for the invention of microprocessors. To overcome certain drawbacks in the microprocessor, micro-controllers were designed. In the year 1959, the company named ‘Fair Child Semiconductors’ invented the very first integrated circuit. Basing this idea Gordan Moore, Andrew Grove, and Robert Noyce have invented the first microprocessor. It is named after their company Intel 4004. This invention is made possible in the year 1971. During the same year, Gary Boone of ‘Texas Instruments’ has invented the microcontroller. Both of these essential IC’s are designed to fulfill real-time application demands. This article discusses the difference between microprocessor and microcontroller.

Introduction to Microprocessor and Microcontroller 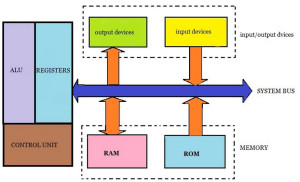 If a processor desires to process an instruction from memory or a request from the I/O, it has to induce instruction through a bus from the memory or I/O, Place it within the registers and process it within the registers. The Processor will save the result in the memory through the bus. However, this architecture has some drawbacks. It is slow and knowledge operations cannot occur at an equivalent time as a result of them share an equivalent common bus. Later, Harvard design is developed. In the Harvard design the information memory and program memory are placed as separate memory and separate buses are connected to communicate with one another. There are two kinds of central processing unit small programming and hardwired programming. Microprogramming is slow in comparison to hardwired. Hardwired implementation is principally of logic gates and passive elements. Code is employed within the microprogramming.

In the microprocessors, the ISA (instruction set architecture) also plays a vital role. There are various types of  ISA microprocessors are available in the market such as

RISC: In the RISC (reduced instruction set computer), the instruction set will be small & execution speed will be fast. The implementation of this instruction is simple and does not require complex architecture. This is widely used in many embedded systems applications. POWERPC  and SHARC use RISC. 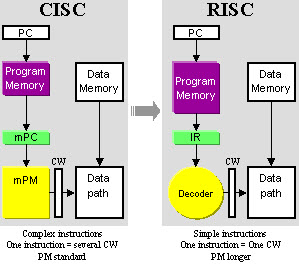 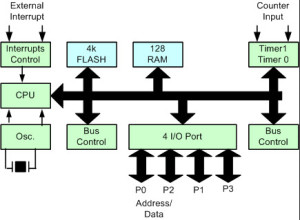 Difference between Microprocessor and Microcontroller

The main difference between microprocessor and microcontroller are discussed below.

What is a Microprocessor?

An integrated circuit that performs the functions as the central processing unit in which the inputs and the outputs are not defined is known as a microprocessor.  The chip is programmable which operates based on the applied inputs. The input bits applied are in the form of binary.  The processing of the input to obtain the desired output is done based on the instructions stored in the memory.

A Microcontroller is a minicomputer present on a single IC. It consists of a processor, ROM, RAM, and the Input/ Output pins to perform various tasks. The inputs applied and the output obtained is defined by the user to perform the tasks. 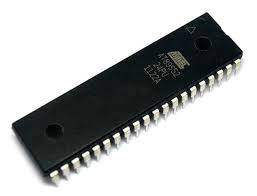 What is the Difference between Microprocessor and Microcontroller?

Both circuits are used for various purposes. But they differ in terms of various factors called memory, power and their desired area of applications. Some of the differences are listed as :

1. Which is Faster Microprocessor or Micro-controller?

2. Is Raspberry pi a Microprocessor or Micro-controller?

Raspberry pi is known for its functioning as an Embedded Computer.  It is a system on chip (SoC) which possess BROADCOM CPU with the ARM processor. It also includes the On-Chip peripherals. Hence the functionality of the Raspberry pi is more like a micro-controller rather than a microprocessor.

3. What is the main function of the Micro-controller?

The main functions carried out by the microcontroller are:

4. What is the difference between Controller and Processor?

Thus, this is all about the difference between microprocessors and microcontrollers. A micro-controller is cheap in terms of cost than that of a microprocessor. Both the processor and controller have their significance. One cannot be replaced with the other during the dedicated tasks. It’s not about which is one is the best.  It is based on what is the demand of the system. Larger applications require the involvement of microprocessors whereas smaller applications prefer microcontrollers.  There are many enhancements and the usage of the processor and controller with the Internet of Things are providing the beneficiary results. Are there any types for microprocessors and micro-controllers?