You are here: Home / Components / What is Schottky Diode : Working & Its Applications

The Schottky diode, also known as a hot-carrier diode or leaky-carrier diode, is the most popular semiconductor diode invented by Walter H. Schottky in 1926. In the early days, wireless devices & metal rectifiers used cat’s whisker detectors within power applications and these detectors can be considered as primitive Schottky diodes. So, let us see why a Schottky diode is so special?

What is Schottky Diode?

A Schottky diode is a special type of metal-semiconductor junction diode that consists of a metal pad that serves as one electrode, and a metal-insulator-semiconductor(MIS) structure with a low barrier height serving as the other electrode. These diodes can have an extremely low forward voltage drop and a relatively high breakdown voltage rating. It is the first semiconductor device available that could perform the function of a rectifier with almost zero turn-on voltage. 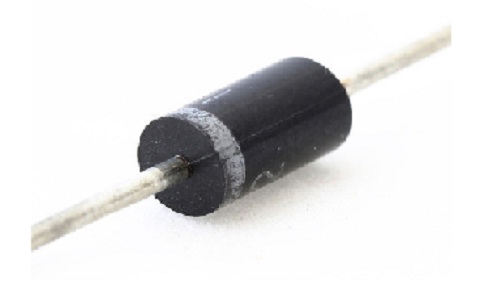 A Schottky diode is constructed of a metal-semiconductor junction instead of two semiconductors as in a conventional (p-n) diode. Although it is not silicon-based like most other diodes, it still uses standard semiconductor fabrication techniques, such as alloying, diffusion, and oxidation to form its junctions. Typically, titanium or chromium is used for the metal, forming what is known as TiSb or CrSi Schottky junctions respectively. 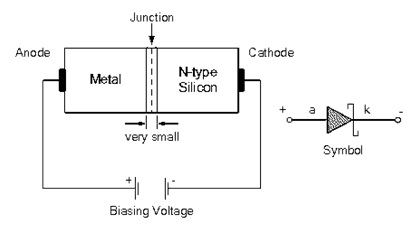 The metal-semiconductor junctions are formed by depositing the metal on top of the n-doped semiconductor which creates an n-type semiconductor/metal junction. Since there are no p-n junctions, they do not display photovoltaic behaviour as in conventional. Depending on the doping the Schottky diode can be ohmic or non- ohmic.

Working of a Schottky Diode

The working principle of the Schottky diode is based on their barrier potential which is less than 0.3V. The forward voltage drop of this diode is independent of temperature and can be as small as 0.15 V (for an idealised semiconductor/metal interface), compared to 0.6 – 0.7 V for silicon p–n diodes and 0.3 V for germanium p–n diodes. The turn-on voltage of the device is generally not constant; it decreases with increasing current through the device and also depends on the reverse voltage applied to the device.

This effect is sometimes undesirable since it means that the forward resistance of this diode does not remain constant when it is used at high frequencies, or when it passes high currents in circuits where there are other sources of forwarding voltage drop (such as the resistances of wires and printed circuit tracks.

Since these diodes have no PN junction, they do not exhibit the reverse recovery time associated with other diodes when switching from conduction to non-conduction states. This allows them to switch much more quickly, allowing higher frequencies to be used. They also have no stored charge in the depletion region so suffer less from thermal runaway than PN junctions do under high current conditions.

Generally, this diode works like a normal diode but the unique characteristics of this diode are high switching speed & very low voltage drop. To understand this in a better way, let us connect a Schottky diode in a circuit and check how it functions. 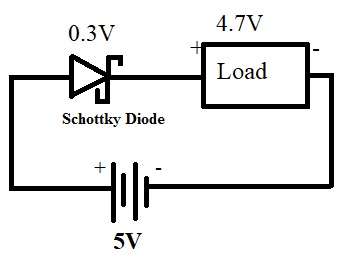 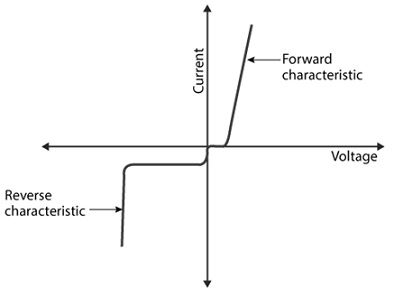 How to connect a Schottky diode

In this section, we will see how to connect this diode in different applications like an RF detector, clamper and switching circuit, etc.

Schottky Diode as an RF Detector

The figure below shows the circuit diagram of a Schottky diode used as an RF detector.  The circuit is designed for detecting signals in the range of 500 kHz to 1 MHz. The RF signal will be applied at the input through capacitor C1 and resistor R1. 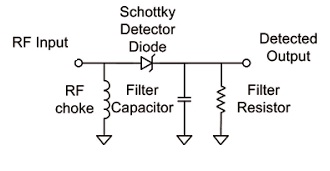 Here, When the RF input signal (AC signal ) is the applied to the diode , the Schottky diode gets forward bias during the positive half cycle. This charges the capacitor. During the negative half cycle the diode get reverse biased so the output of the signal will be a D.C. signal with the same voltage as the input. But When the input voltage decrease the capacitor discharges through the filter resistance.

These circuits are simple rectifier circuits that produce a low-frequency o/p voltage or current which is proportional to the input RF signal. These circuits are frequently used to check the output range of a power amplifier within a radio transmitter, otherwise, they can just specify the existence or deficiency of an RF signal.

Schottky Diode as a Switch

To use a Schottky diode as a switch, you need to know the forward voltage drop V_F that the diode exhibits. This is usually specified in the datasheet and depends on temperature, current, and height of voltage drop.

Schottky Diode as a Clamper Circuit 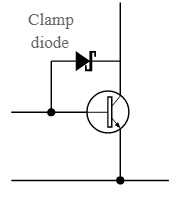 Once the diode uses most of the current & permits the transistor’s turn-off time to be greatly reduced, thus the circuit speed can be enhanced. The Schottky diode is simply used in several applications like in both high power rectification & very low power signal detection.

Schotty Diode in the Logic Circuit

The traditional way to make a logic gate is to use transistors and logic gates. But these logic gates have many disadvantages, such as the fact that they are slow and they take up a lot of space on the motherboard. Whereas when made with a Schottky diode it has very small and provides a faster out. It can be used in place of an inverter. This means that a Schottky diode can be used to make an AND gate or an OR gate.

OR Gate & AND Gate

As shown in the above AND logic gate, a 2-input AND gate can be formed by using two Schottky diodes like A & B. The working of AND gate follow as; If both the inputs are logic zero then the output will be logic and if the two inputs are logic 1 then the output will be 1.   To form an AND gate the Schottky diode is connected in reverse bias so when a 5v is applied to both gates it is reverse biased and does not conduct and so the output if be high.  If any one of the input is low then that diode conducts and so the output is low.

Difference between the Schottky Diode and a Normal Diode

The difference between the Schottky diode & a PN junction diode includes the following.

The disadvantages of the Schottky diode include the following.

Please refer to this link for Schottky Diode MCQs

The applications of the Schottky diode include the following.

Thus, this is all about the importance of Schottky Diode. These diodes are available with different package types, including SMD (surface mount), radial led, and axial led. There are different parameters that need to consider while selecting Schottky diode like forwarding voltage drop, reverse breakdown voltage, reverse recover time & reverse leakage current. Here is a question for you, what is Zener Diode?