You are here: Home / Components / What is a Phototransistor : Working & Its Applications

What is a Phototransistor?

A semiconductor device like a phototransistor includes three layers with a light-sensitive base region. Here, the base region detects the light & changes it into the current that supplies among the two regions like the emitter & the collector.

The phototransistor construction can be done like an ordinary transistor apart from the base region. In this type of transistor, the flow of current to the base region is not provided, but the light energy can be used as the input. 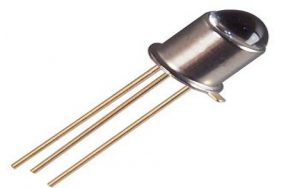 Alternatively, a phototransistor is also considered like a Photodiode including a current amplifier. This transistor changes directly from photons to charge similar to a photodiode and also offers a current gain. The phototransistor symbol is shown below that is the same as an ordinary transistor but the main difference is that the two arrows on this will explain the light incident on the base terminal of the transistor. 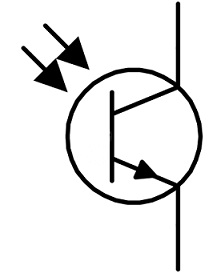 When the size of the junction is higher, then it results in a significantly better junction capacitance. Consequently, these transistors have less frequency response as compared to photodiode despite the high gain.

The light penetrates the base terminal of the transistor to produce the pairs of electron-hole in the reverse biasing. The flow of electrons in the pressure of the electric field can cause the current within the base region. This current can be injected with the electrons within the emitter area. The main disadvantage of this transistor is the low-frequency response.

The area of the base terminal can be increased to enhance the amount of produced current because when more light drops on this transistor then a huge current will be generated. Before, it was designed with a single semiconductor material such as germanium or silicon. At present, these transistors are made up of Arsenic & Gallium to get high efficiency. 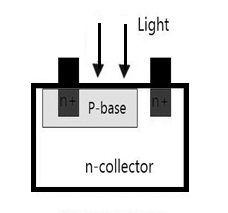 At last, the arrangement of a phototransistor can be done in a metallic box & a lens is placed at the top of the box to absorb the incident radiation. The construction of the phototransistor is quite similar to the ordinary transistor. Earlier, germanium and silicon materials are used for constructing this phototransistor.

The junction of the emitter-base is connected in forwarding bias whereas the collector-base region is connected in the reverse biased. Whenever no light ray drops on the transistor’s surface, then a little reverse saturation current will induce on top of the phototransistor due to the fewer minority charge carriers.

The energy of light drops on the junction of the collector to base then it generates the majority charge carriers and adds the flow of current toward the reverse saturation current. The graph below shows the magnitude of current increases along with the intensity of light.

The characteristics of a phototransistor are discussed below. 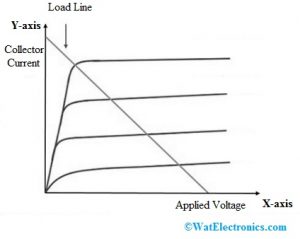 Difference between Photodiode and Phototransistor

The main difference between photodiode and phototransistor includes the following. 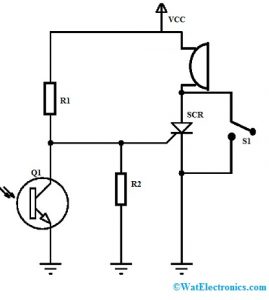 Once the light gets interrupted, the transistor will be turned OFF & provides sufficient potential on the gate terminal of SCR to activate it. Consequently, the alarm can be generated & it can be reset with the help of the switch.

The specifications of the phototransistor include the following.

The advantages of phototransistors include the following.

The disadvantages of phototransistors include the following.

The applications of phototransistors are as follows:

Please refer to this link to know more about Phototransistor MCQs

Thus, this is all about an overview of a phototransistor and its working These are semiconductor devices & they are existing like PNP or NPN transistors. These components can also be available like other semiconductor devices & electronic components from almost all electronic component distributors with less cost. So, phototransistors are extremely sensitive and it is fairly slow. The major drawback of this transistor is increased sensitivity. Here is a question for you, what are the different types of transistors available in the market?