You are here: Home / Basics / Transistor as a Switch – Circuit Diagram, Working & Applications

Basically transistor is a type of semiconductor device. These devices consist of three numbers of terminals. The interaction among the two terminals will be in such a way that two junctions are formed in it. These junctions and altogether the terminals are responsible for the generation of the current either the current controlled or the respective voltage-controlled devices are designed. This article discusses below about Transistor as a Switch along with its working and applications.

The basic application one can see frequently is in use is the device working as a switch. The basic concept behind its functioning is dependent on the operating modes of it. A device that prefers a low value of the voltage of DC can be switched either ON or OFF by using transistors.

Transistor as a Switch

Basically as per the generations of the electronic circuits gets revolutionized and improved for better and comfortable living the transistors played a prominent role by replacing themselves with vacuum tubes.

This leads to an improvement in efficiency and compression in size. The main functionality of the transistor can be observed either by making it be used for amplification or to the basic application in the digital circuitry of switching. 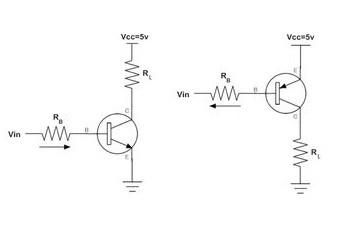 By the application of bias to the base of the transistor both the types in the bipolar junction transistor can be used as switches. The areas at which the operation of the switch is preferred is either it should be completely in the region called saturation or the cut-off operating region. The main theme behind using these regions is that switch mode should be completely ON or OFF.

This is for N-P-N transistor whereas for P-N-P transistor the value of the voltage at the emitter must be negative. As there is no flow of carriers in this condition the width of the region called depletion increases stating that no current flow is evident at this condition. This type of region is referred to as the cut-off region.

Next condition in which switch is operated is saturation here the currents at the base and the collector is at maximum by keeping the voltage at the collector as a minimum. This operating condition makes the transistor to operate at fully ON mode. This is for N-P-N transistor whereas for P-N-P the emitter voltage value must be kept positive with respect to that of the base.

This operation of the transistor is known as a single pole single throw (SPST). This indicates that when the zero of the signal applied to the base the transistor will be ON otherwise it will be OFF.

N-P-N Transistor as a Switch

Once the transistor is in ON condition the current generated tends to flow from source to the load. The load can be either the led or the resistor, load depends based on the requirement.

P-N-P Transistor as a Switch

The operating conditions of the P-N-P and N-P-N transistor differ in the application positive or the negative voltages. But the criteria of the operation remain the same. If it is in ON condition the flow of current is observed otherwise it is OFF.

The above is the basic application of the transistor as a switch for the P-N-P and N-P-N bipolar junction transistors.

The applications of the transistor used as a switch are as follows:

There are many applications in the practical world regarding relays, motors, etc., in every practical involvement plays a major role in switching the devices. This can be either for the alternating supply or the direct supply. Nowadays in the curiosity of providing comfortable and secure living the design of automation systems or the fire detection systems this switching technique of the devices plays a dominant role. Can you explain the basic purpose of usage of relays in the automation circuits?