As the name suggesting it is a single junction transistor but it is widely used in the circuits of timing, triggering circuits and so on… it is a device that consists of dual layers along with three terminals present in it. It is having very different characteristics in comparison with the other transistors. Its three terminals are named as base1, base2 and the emitter. The current at the terminal emitter tends to increase as the input gets triggered.  These are used during switching of the devices other than amplification.

What is a Uni Junction Transistor?

The basic functionality of the UJT depends on the value of the voltage applied. If the voltage applied in between the terminals of the emitter and the base1 are supposed to be zero this UJT doesn’t conduct. Hence the N-Type material tends to acts as a resistor. As the applied voltage tends to increase at the terminal of emitter the value of resistance tends to increase and the device begin to conduct. In the whole process the conduction is completely dependent on the majority of the charge carriers. This is the basic principle involved in UJT.

UJT Symbol and the Construction of UJT

The symbol of UJT is designed in such a way that arrow is bent and shown that it is in the direction towards the channel. It resembles of JFET. If the channel is made of the N-type then the terminal called emitter is of P-type and vice-versa. But the other type is rarely used. The junction in between the terminal of emitter and the bases are positioned in such a closer way to form a better communication. When the arrow from the emitter is pointing towards the terminals base 1 and the base 2 indicates that the terminal from which the arrow is coming that is emitter is positive whereas the base is of negative nature. 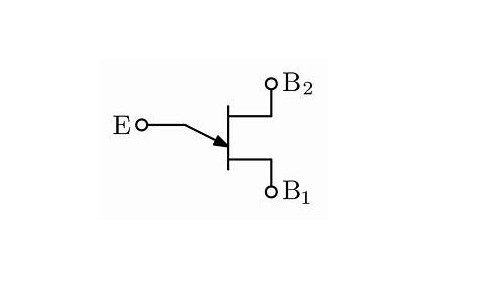 The construction of the UJT is simple as it has one junction. The construction resembles diode.  The difference in between the UJT and the diode is that it consists of three terminals in comparison with the diode. The higher resistance value is present at the bar that is of n-type. The maximum value for the resistance is formed in between the terminals of the base 1 and the emitter in comparison with the resistance value of the terminals base2 and the emitter. The reason for this is that the positioning of the emitter is nearer or closer to the base 2 rather than base 1. The above connections makes a basic circuit diagram of UJT.

This transistor is operated by making the junction of the terminal in the forward biasing mode.  The operation of this UJT is unique but it doesn’t amplify the signals but capable enough of handling and controlling the larger vale of the power applied in terms of AC.  It also exhibits the resistance in terms of negative polarity. This makes the UJT to utilize it as an oscillator circuit.

The characteristics of the UJT are as follows 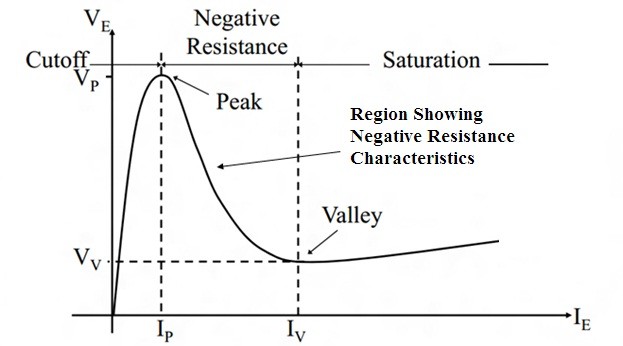 As the current in the UJT tends to increase there can be evident drop in voltage value.  Hence this transistor shows the negative characteristics of resistance. This paves the way to make the UJT to work as a relaxation oscillator. The basic functional unit of this oscillator consists of resistor and the capacitor with UJT as the active unit for the oscillator to perform operation.

UJT is a transistor with one junction.  This possesses the resistance with negative characteristics. This makes the UJT to function as an oscillator. This is an oscillator with the basic resistor and capacitor. As it is good at switching and it takes minimum value of the nano seconds for switching the devices.

The circuitry of the relaxation oscillator consists of the resistors and the capacitor. The resistors act as the limiters of the current. Initially when the voltage is applied the UJT is considered to be OFF.  The capacitor tends to charge through the resistor present there that is R.  This charging of the capacitor is exponential in nature.

As the diode exceeds the minimum value the device starts conducting by making the emitter junction to be in forward biasing mode. Hence the transistor is considered to be ON. This makes the resistance value between the emitter and the Base 1 to decrease and the device enters in to the region of saturation that is fully conducting.  The flow of current of the terminal emitter through the resistor that is R1 takes place. 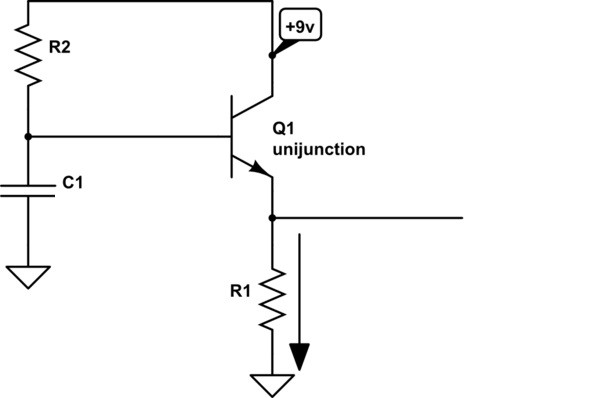 Difference between UJT and BJT

The basic differences between the UJT and the BJT are as follows.

In this way the UJT and the BJTs are classified based on the basic operating differences.

As the applied voltage decides the flow of current and thus making the device to get turn ON and OFF this makes the device as voltage control capable. As it is dependent only on the majority of the flow of carriers it is referred to as the uni junction device. It possesses very unique operating characteristics. It cannot support amplification but can provide good switching because it has nano seconds of the time in between the switching of the devices.

Please refer to this link to know more about UJT Relaxation Oscillator.

Hence the UJT possesses the characteristics of the negative value of the resistance by making the device too use it in an oscillator. It can be used in various triggering circuits because of the operation is dependent on the triggering of the emitter. Over all UJT looks like JFET resembles like diode because of one junction in it but its way of operation is completely different.  In this way UJT is defined with its own specifications. As it is a good switch but still it possesses unique characteristics in comparison with other transistors. Now can you describe the practical example of the UJT?