You are here: Home / Electronics / What is IR Sensor : Circuit & Its Working

What is IR Sensor?

The IR sensor or infrared sensor is one kind of electronic component, used to detect specific characteristics in its surroundings through emitting or detecting IR radiation. These sensors can also be used to detect or measure the heat of a target and its motion. In many electronic devices, the IR sensor circuit is a very essential module. This kind of sensor is similar to human’s visionary senses to detect obstacles. 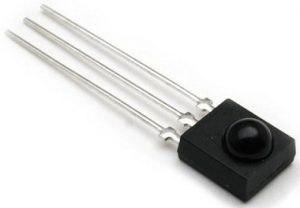 The sensor which simply measures IR radiation instead of emitting is called PIR or passive infrared. Generally in the IR spectrum, the radiation of all the targets radiation and some kind of thermal radiation are not visible to the eyes but can be sensed through IR sensors.

In this sensor, an IR LED is used as an emitter whereas the photodiode is used as a detector. Once an infrared light drops on the photodiode, the output voltage & resistance will be changed in proportion to the received IR light magnitude.

An infrared sensor includes two parts namely the emitter & the receiver (transmitter & receiver), so this is jointly called an optocoupler or a photo-coupler. Here, IR LED is used as an emitter whereas the IR photodiode is used as a receiver.

The type of incident that occurred is the direct otherwise indirect type where indirect type, the arrangement of an infrared LED can be done ahead of a photodiode without obstacle. In indirect type, both the diodes are arranged side by side through a solid object ahead of the sensor. The generated light from the infrared LED strikes the solid surface & returns back toward the photodiode. 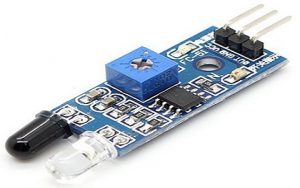 The main specifications and features of the IR sensor module include the following.

The classification of IR sensors can be done based on the application which includes the following.

The working of an infrared sensor can be done through radiating energy, detected and received through the detector. Further, it is processed through a signal processor to fetch the required data. The best examples of active infrared sensors are reflectance & break beam sensors.

Passive Infrared Sensor (PIR) includes detectors only and this kind of sensor uses targets like infrared transmitters or sources. Here, the object will radiate the energy & detects it through infrared receivers. After that, a signal processor is used to understand the signal to obtain the required data.

These types of sensors are independent of wavelength and they utilize heat-like energy sources. These are slow along with the response time as well as detection time.

These types of sensors depend on wavelengths and the response time and detection time they have are high. These kinds of infrared sensors need repeated cooling for exact measurement.

The application circuit of the IR sensor is an obstacle detecting circuit that is shown below. This circuit can be built with a photodiode, IR LED, an Op-Amp, LED & a potentiometer, The main function of an infrared LED is to emit IR light and the photodiode is used to sense the IR light. In this circuit, an operational amplifier is used as a voltage comparator and the output of the sensor can be adjusted by the potentiometer based on the requirement. 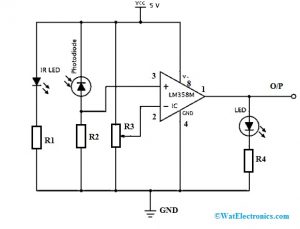 In this circuit, the arrangement of the IR receiver and the IR LED is a very essential factor. Once the infrared LED is placed directly ahead of the infrared receiver, then this arrangement can be known as Direct Incidence.

So in this case, nearly the whole radiation from the infrared LED will drop on the infrared receiver. Therefore there is a row of view contact among the IR Tx & Rx. If a target drops in this row, it blocks the emission while approaching the receiver by reproducing or absorbing the radiation.

The advantages of the infrared sensor include the following.

The disadvantages of the infrared sensor include the following.

The applications of the infrared sensor include the following.

Thus, this is all about an overview of the Infrared Sensor or IR sensor. This kind of sensor is most frequently used in wireless technology wherever surrounding objects detection, functions of remote controlling, etc. The main features of this sensor are motion & heat sensing. The infrared region is not noticeable to human eyes. Here is a question for you, what are the different types of sensors available in the market?