You are here: Home / Electronics / What is Arduino Sensor : Types, Working and Applications

An electronic device that senses and responds quickly to physical changes such as distance, pressure, temperature, touch can be referred to as sensors. These are used commercially in various products for temperature monitoring, alarming circuits, and in the Home automation kits, etc… In the practical world, where the motive is to design a user-friendly environment such that various devices information can be controlled, sent, and monitored. This is made possible when the multiple sensors are interfaced with the Arduino board. The name Arduino comes from the Italian king ‘Arduin of Ivrea’ and it is invented around the year 2000. Because of the availability of it as open-source, it became successful under the platform of micro-controllers. Based on the applications required and the availability of the variety of sensors the required Arduino Sensor boards can be chosen.

What is Arduino Sensor?

Arduino is comprised of a micro-controller as a functional unit and an IDE that is the software platform where the code will be uploaded into the hardware. As day to day, the popularity of the Arduino board is increasing and sensors are compatible with these boards. For the new applications,  designing the required sensors by interfacing is easier with the invention of Arduino boards.

In the past, the micro-controllers require external hardware setup to upload the code and the interfacing gets complicated. This condition has overcome by replacing the simple micro-controllers with the Arduino.  These Arduino boards are facilitated with the inbuilt software IDE that is capable of uploading the code into the hardware.

The flexible environment provided by these Arduino’s making it immensely popular in the field of electronics. Only the extra hardware required for these Arduino boards is a breadboard, ground, connecting wires, and most importantly power supply for the initializing and working of the setup.

Types and Applications of Arduino Sensor

Arduino on its board has introduced multiple sensors where each of the sensor utilized is application-oriented. 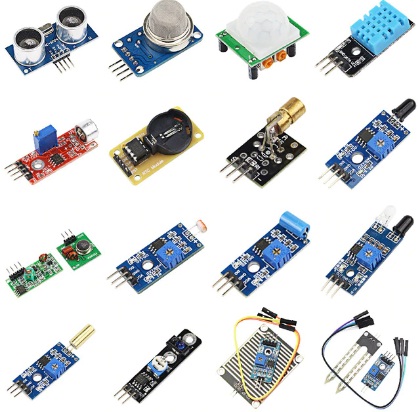 The PIR sensor interfaced with Arduino is to detect the motion. The sensor has a provision to adjust its sensitivity and the delay with the two resistors that are variable by nature. It is generally preferred in robotic applications. The ultrasonic sensor interfaced by Arduino is to measure the distance.  The sensor utilizes the SONAR principle to find out the distance of a certain object.

For smoke detection, the gas sensors are interfaced with the Arduino. These sensors possess an inbuilt potentiometer so that the sensitivity of the sensor can be adjusted based on the accuracy of detecting the gas.  A sensor used for detecting the moisture in the soil known as a soil hygrometer that generates a signal if the moisture content exceeds the determined threshold.

The signals used for the indication is digital. The application named Automatic Self-Watering Plant utilizes this sensor with the Arduino. Similarly to detect the intensity of the sound when it exceeds the threshold Microphone sensors are used.

The rain sensor for the monitoring of weather, flame sensor is to detect the flames and the gas sensors to detect the hazardous gases. So all these various types of sensors can be included with the  Arduino boards for the various projects or applications.

The various types of Arduino sensors available are

1). What sensors are available for Arduino?

Arduino interfacing makes it easier to obtain the information and the values of the sensor. The popularity of Arduino makes it interactive with the invention of various sensors. Some of the most prominent of them are Temperature and the Humidity sensor, Photoresistor, Sound sensor, Ultrasonic sensor, Water sensor, Flame sensor, and so on.

2). What are the sensors in Arduino?

Sensors are the sensing devices present on the Arduino to detect any sort of physical changes occurred.

3). How many sensors can an Arduino handle?

Sensors handled by Arduino is based on its requirement and the interface utilized for it to connect.

4). How do I connect Arduino to sensors?

To connect the  Arduino to sensors, certain steps must be followed. Let us discuss it in detail with an example of an IR sensor.

Following the above steps, the IR sensor is interfaced with Arduino. Likewise, various sensors follow the above methods to get connected to the Arduino.

5). Is Arduino better than Raspberry Pi?

In terms of processing, Raspberry pi is faster when compared to Arduino. But when the matter is about hardware compatibility Arduino is preferred above Raspberry pi.

Please refer to this link to know more about Temperature Sensor.

Thus, Arduino boards are popularly used by the students in the designing of projects. The IDE of Arduino consists of multiple libraries that can interface with a variety of sensors. It has the capability of adapting to new changes. Previously, it is used to function as a simple 8-bit micro-controller but now after further advancements, it is utilized in the applications of IoT. After a discussion about the multiple sensors in the Arduino and an overview of it. Can you describe what is the difference between Arduino Uno and  Arduino Nano?