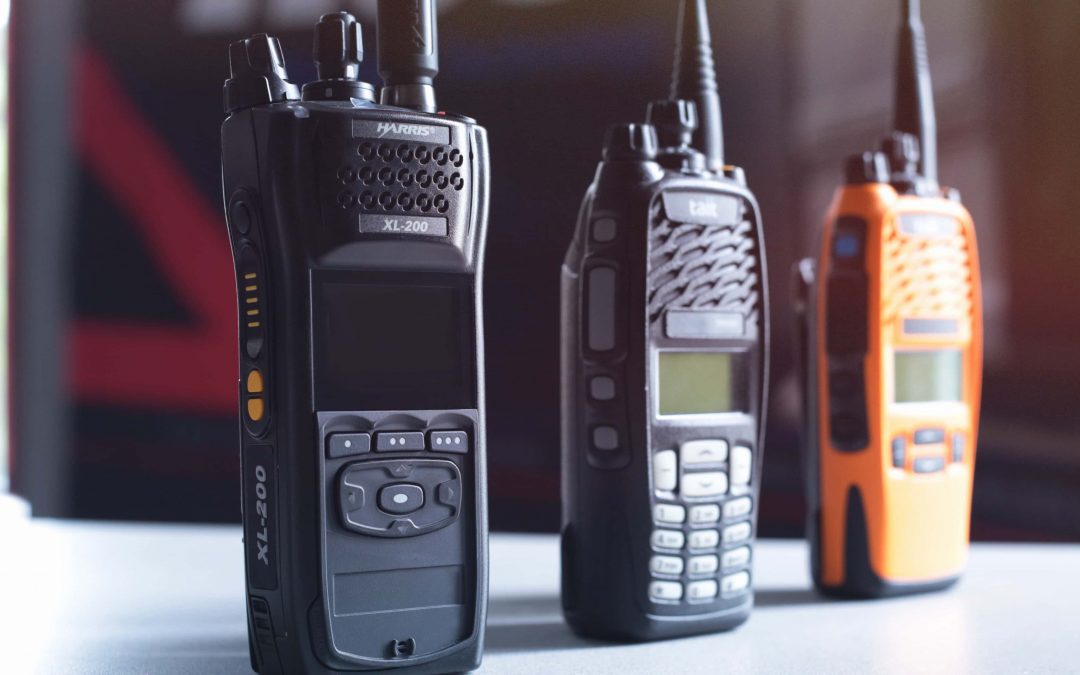 The term wireless RF stands for “wireless Radio Frequency Technology”. If you are just starting with radios, this article can help. It is proposed to give a basic understanding of radio frequency,as well work as a quick reference for those who “know their knowledge” but may be observed to brush up on that one place that they never quite understood. Radio frequency is a measurement signifying the oscillation rate of electromagnetic radio waves or electromagnetic radiation spectrum of frequencies ranging from 300 GHz to 9 kHz. With the use of transmitters and antennas, the radio frequency field can be used for several types of wireless communications.

What is Wireless Radio Frequency?

Wireless Radio frequency is any of the electromagnetic wave frequencies that lie in the range ranging from around 3 kHz-300 GHz, which comprise those frequencies used for radar signals or communications.

Radio frequency usually denotes to electrical rather than mechanical oscillations. But, mechanical RF systems do occur. Although RF is a rate of oscillation, the name RF or “radio frequency” are used as a substitute for radio to define the use of wireless communication, as different to communicate through electric wires. 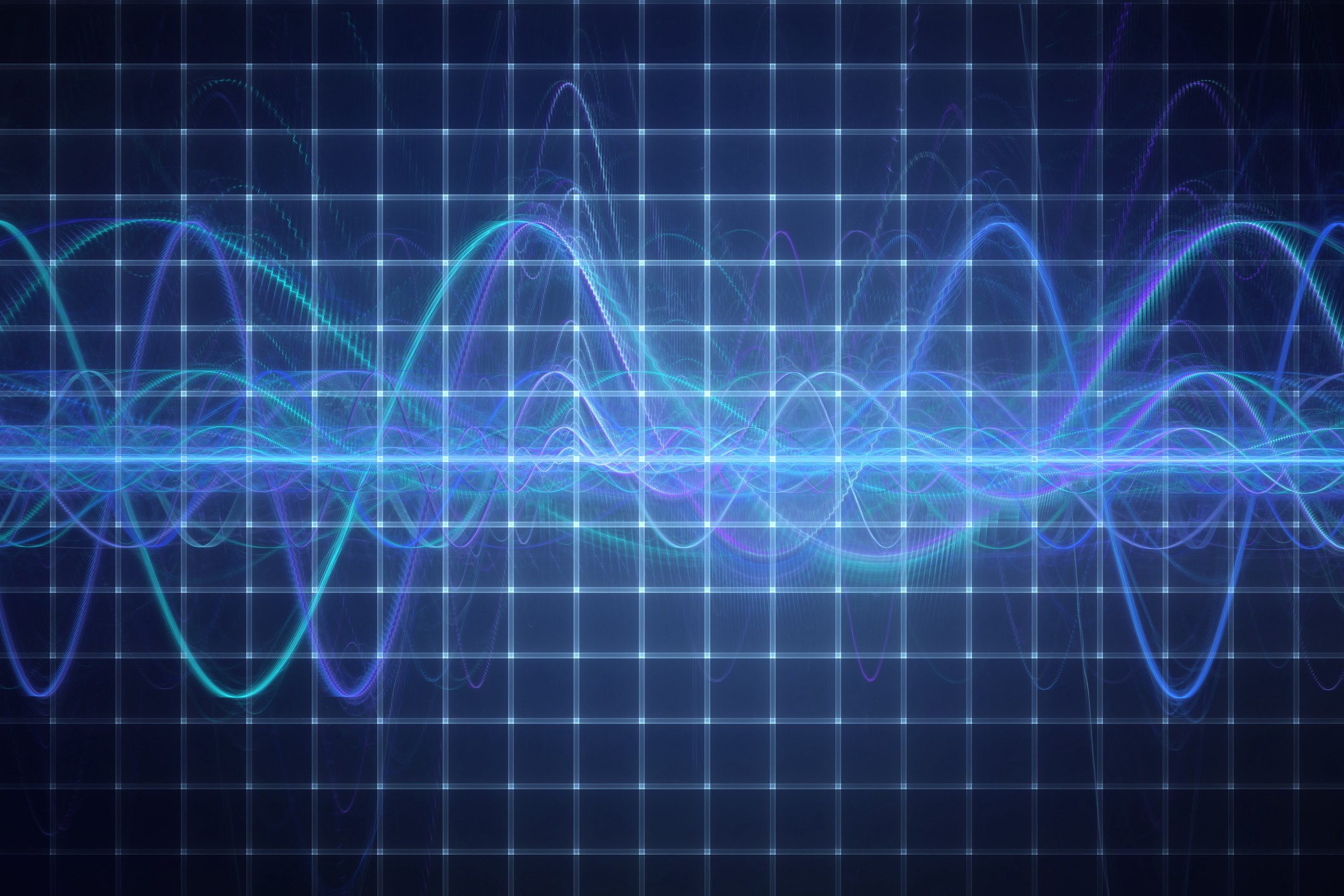 In addition, other appliances, external communications, comprising garage-door openers and microwave ovens, function at radio frequencies. Some wireless devices such as, TV remote controls, computer mice, and some cordless computer keyboards operate at infrared frequencies, which have smaller electromagnetic wavelengths.

The term RF (Radio frequency) is measured in units called Hz (hertz), which denote the number of cycles/second when a radio signal is transmitted. One Hz (hertz) equals one cycle per second; radio waves range from 1,000 KHz to millions MHz to billions GHz of cycles per second. Microwaves are a kind of radio wave with higher frequencies. Radio frequencies (RF’s) are not visible to the human eye.

As the frequency ‘f’ is enhanced beyond that of the RF spectrum, electromagnetic energy takes the type of IR, ultraviolet, visible, X-rays and also gamma rays.

The RF module is applicable for different types, sizes, and shapes of small electronic circuit boards. These modules typically include a PCB (printed circuit board), antenna, transmit or receive circuit, and serial interface for communication with the host processor.The different types of RF modules include the following 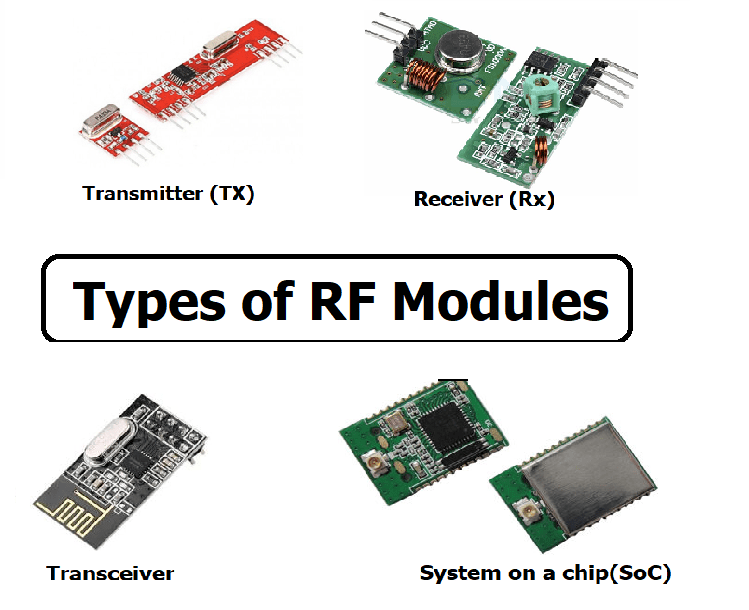 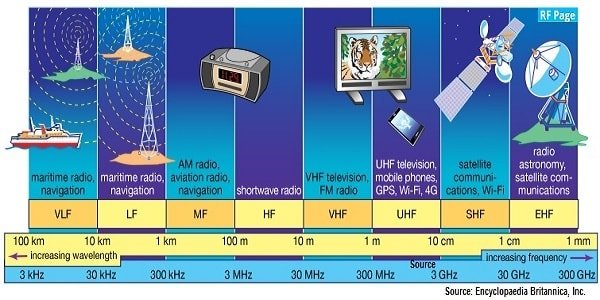 As with any other RF module, the RF module’s performance will depend on a number of factors. For instance, by increasing the power of a transmitter, a larger communication distance will be reached. But, this will also result in a higher electrical power drain on the transmitter (TX) device, which will root smaller operating life for battery-powered devices. Also, with a higher transmit power will make the system more disposed to interference with an extra RF device.

Correspondingly, increasing the sensitivity of the receiver will also rise the active communication range, but will also possibly cause an error due to interference with additional RF devices.The performance of the whole system may be enhanced by using corresponding antennas at each end of the communication link.

Lastly, the considered remote distance of any specific system is usually measured in an open-air line of sight outline without any interference, but frequently there will be problems like floors, walls, dense construction to grip the radio wave signals, so the current operational distance will in most real examples be less than specified.

The characteristics of RF include the following

The applications of RF technology include the following

Please refer to this link to know more about RFID MCQs

Thus, this is all about radio frequency wireless technology working and its applications. We believe that you have got a better concept about this concept. Furthermore, any doubts regarding this concept or to implement RF based projects, please give your valuable suggestions by commenting in the comment section below. Here is a question for you, What is the purpose of RF technology?