You are here: Home / Electronics / What is Galvanometer – Construction & Its Working

After the demonstration of Hans Christian Ørsted in the year 1820 that is, an electric current can turn aside a magnetized needle, the first galvanometer was designed. This device was designed by physicist Johann Schweigger & German mathematician and they named it a multiplier. Basically, a galvanometer includes a needle, connected to a coil so that the coil can move freely in a magnetic field. This field can be created through one or more permanent magnet poles.

Once electricity is supplied throughout the coil in the meter, the magnetic field will generate through the current-carrying wire that interacts by the permanent magnet field, so that it generates a twisting force called torque. Here, the torque turns the coil; a response explains by the left-hand rule. The deflection of the needle in the galvanometer is proportional toward the current supplying throughout the coil. This article discusses an overview of a galvanometer and its working.

In any electrical and electronic circuits, even if the loop/switch is closed, then it is hard to identify whether the flow of current is there or not. So, a galvanometer is used for identifying the current flow within in the circuit. These are electro-mechanical devices that are not only used for detecting the flow of current as well as it measures the current within a circuit/conductor. This instrument also performs an ammeter function through a small change in it can be converted into an ammeter. 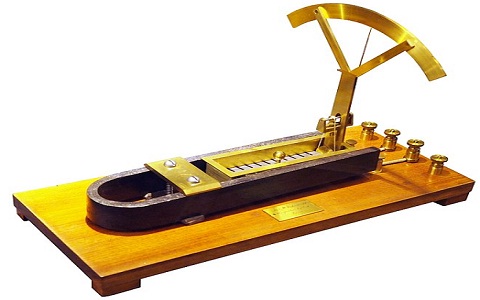 The main function of a galvanometer is to convert electrical energy into mechanical energy i.e., the current supplying within the magnetic field gets changed into magnetic torque. The galvanometer device works like an actuator because it generates a rotating torque that turns aside within the reverse direction.

The construction of a galvanometer includes a soft iron cylinder that is enclosed through a frame wherever a coil is covered on the frame, a permanent magnet or magnet of the cylinder head is located in the region of the frame. An axial rod & pivot is located in the spindle form. A magnetic needle or indicator is mainly used to specify the readings on top of a scale. The scale readings are in ampere or A. 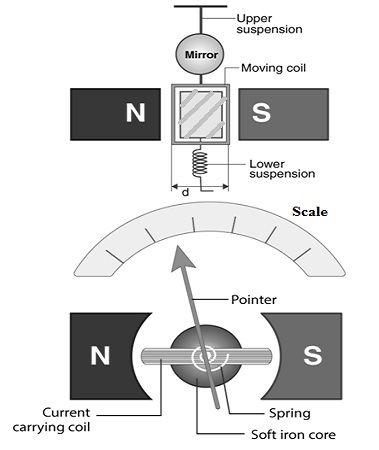 In the galvanometer, the current-carrying part is a moving coil. The shape of this coil is a circular or rectangular shape. This coil includes the number of copper wire turns. The coil moves freely in the vertical axis of equilibrium in between permanent magnet poles. The iron core gives the path for less reluctance flux to provide a strong magnetic field mainly for the coil to move freely.

The coil in the galvanometer can be balanced through a flat ribbon that holds the current and supplies to the coil. The other coil is the lower suspension where the torque effect of this is small. The material used to make a higher suspension coil is copper or gold wire in ribbon form. Here, the wire’s mechanical strength is not extremely strong, so the galvanometer can be handled cautiously without any jerks.

The suspension holds a tiny mirror that emits the ray of light and it is placed on the scale to measure the deflection.

The torsion head in the galvanometer is mainly used to control the location of the coil & for regulating the setting to zero.

The main function of a galvanometer is to gauge the direction, electric current & presence within the conductor. It works on the principle of energy conversion from mechanical to electrical. Once the power supply is turned ON, the flow of current within the magnetic field can be realized.

If it is open to revolve in the controlling torque, then it is turned through an angle that is proportional to the flow of current through it. This instrument is an ampere meter type, mainly used to gauge as well as to detect electric current.

In the galvanometer, let the d & l are the lengths of individual horizontal & vertical sides of the coil within the meter.

‘N’ is the no. of turns within the coil,

‘I’ is the flow of current throughout moving coil within Ampere

‘K’ is the spring constant for suspension like Nm/rad

Once the current supplies throughout the coil, then it experiences a torque that is expressed as

The force on every face of the coil can be expressed as,

N, B & A are the constants of the galvanometer.

The constants of the galvanometer are N, B & A

Where ‘G’ is the displacement constant & its value is equivalent NBA = NBld.

There are different types of galvanometers namely Tangent, Astatic, Mirror, and Ballistic. But, nowadays D’Arsonval, the moving coil or Weston type galvanometers are widely used. For an electric current detector with a moving coil, a historical name like a galvanometer is given. The galvanometer diagram is shown below.

Some more galvanometer includes the following.

Here the classification of galvanometers can be done by two types based on their uses like Ballistic & Dead beat/a periodic. Ballistic is mainly used to detect & measure the charge whereas periodic type is used to measure & detect the potential difference & charge within the circuit.

The conversion of a galvanometer into an ammeter is discussed below.

The conversion of a galvanometer to an ammeter can be done by connecting the wire with low resistance with the galvanometer in parallel. Here the potential distinction between the shunt resistance & the voltage is equivalent. 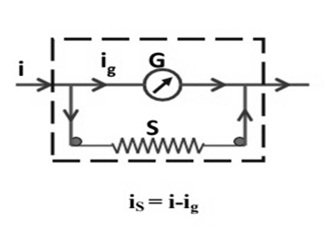 Voltage beyond shunt resistance Vs = SIs

Current beyond the shunt is ‘Is’

When the galvanometer (G) & the shunt resistance (S) are allied in potential through the circuit, then their potentials are equivalent

So, the shunt resistance (S) can be expressed as

As compared with the current supply, the shunt current value is extremely small. 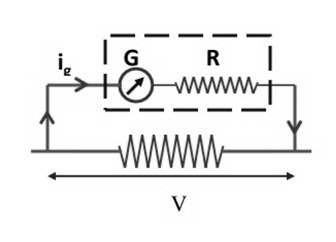 Here, the voltmeter range mainly depends on the resistance value that is allied with the circuit in series.

Difference between Galvanometer and Ammeter

The conversion of a galvanometer into an ammeter can be done by connecting it parallel to a resistor within the circuit. When the resistor is connected in series then it can be changed into a voltmeter. Ammeter is mainly used for determining the magnitude of current and it is also known as ampere meter as the unit of current is ampere.

Please refer to this link to know more about Galvanometer MCQs

The main difference between galvanometer and ammeter include the following.

How to Make Simple Galvanometer at Home

Galvanometer instruments allow us to do some neat things like laser pointers, projectors, laser shows. Galvo systems are mirrors that move on a technical system to allow performers, laser lights along with music. The required components to make a DIY galvanometer include the following.

Galvanometers are mainly used for detecting electrical currents. So we can make our DIY instrument by using a copper wire, a compass, a power supply & a thin insulated wire with 3 to 4feets. At every end of the copper wire, an inch of the plastic insulation has to remove to expose bare copper wire.

The advantages of a galvanometer include the following.

The disadvantages of galvanometers include the following.

The applications of the galvanometer include the following.

Please refer to this link to know more about Anemometer.

Thus, this is all about an overview of a galvanometer and its working. This is one kind of instrument mainly used for measuring extremely small currents within the circuit. At present, the modern type of galvanometer used is the moving coil type. When the mechanical and electromagnetic damping is eliminated from this instrument then it can be utilized like a ballistic galvanometer to gauge little capacitances & charges. Here are a few questions for you: what is the function of an ammeter? What is a Flux meter?