You are here: Home / Electronics / What is Damping Ratio : Formula & Its Significance

Damping of the oscillatory system is the effect of preventing or restraining or reducing its oscillations gradually with time. The damping ratio in physical systems is produced by the dissipation of stored energy in the oscillation. It is the restraining or decaying of vibratory motions like mechanical oscillations, noise, and alternating currents in electrical and electronic systems by dissipating energy. Examples of damping are; viscous drag in mechanical systems, resistance in electronic oscillators, absorption of light in optical oscillators, shock absorbers in automobile systems, suspension of mass from spring.

It is also important in other oscillating systems like biological systems and bikes. The level of damping of the system is divided into 4 types. They are undamped, underdamped, critically damped, and overdamped. To know the number of oscillations decayed with time, the damping ratio is to be calculated. This article explains the damping ratio of a control system / second-order system / closed-loop system and its significance.

What is Damping Ratio?

Definition: The damping ratio is defined as the number of oscillations in a system that can decay or restrain after an interruption and it is a dimensionless measurement. Most of the systems work in oscillatory mode when they are interrupted or disturbed from their initial position. For example, suspension of mass from a spring. If the mass is pulled and released, then it bounces up and down. The system tries to return to its initial static position after every bounce.

The movement of the mass is resisted due to the damping and the spring. After some time, the frictional losses damps the system and the oscillations would decay gradually by reducing or attenuating the amplitude. Therefore, this is referred to as the number of oscillations decayed by the system rapidly from one bounce to another.

The damping ratio symbol is denoted as ‘ζ’ (Zeta). 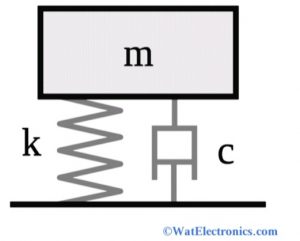 The differential equation of motion of a system is written as,

The critical damping coefficient formula is given as

The ratio of two coefficients of identical systems gives the damping ratio, which is a dimensionless measurement. It expresses the level of damping of the system mathematically.

The effect of variation in the second-order system is shown in the below figure. 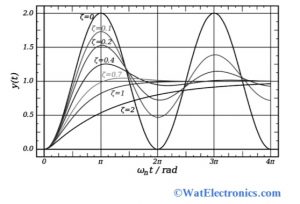 The general exponential damping equation of a sinusoidal signal is given as,

Where y(t) is the instantaneous amplitude of the signal at time t.

‘A’ is the amplitude

‘λ’ is the decay rate of the signal

‘ω’ is the angular frequency.

The damping ratio formula for the closed-loop system is discussed below.

The formula in the control system is given as,

Where ωn = √k/m is the natural frequency of the system.

The above equation is more general than mass-spring action systems and applicable to electrical circuits and other systems.

The damping ratio in the control system can be solved with another approach. That is,

Where ‘C’ and ‘s’ = complex constants

Therefore the two values of s and damping ratio combine to obtain a general real equation that helps to understand the decaying properties of the system.

Hence from the above conditions, we conclude that this is a non-dimensional measure of a control system or second-order control system with a decay rate related to the natural frequency.

The relation between the ‘Q’ factor, damping ratio, and decay rate of the system is given as

Where Q factor is also a non-dimensional measure of the damping of the system. If the value of Q is high, then the system exhibits slow damping corresponding to the oscillation.

How to Find the Damping Ratio of a Second-order System

To find the damping ratio of a second-order system, consider a closed-loop system with the differential equation as given below,

Now by applying the Laplace transform both sides with initial conditions, we get the input and output transfer function as,

This is the differential equation for a second-order system with poles and no zeros.

Since the poles of the second-order system are located at,

The response of the second-order system is known from the poles. Because all the information about the damping ratio and natural frequency is encoded by the poles.

The time constant with exponential decay is given as

The damped natural frequency is written as

Where ‘ωn’ is the natural frequency of the underdamped system

‘ζ’ is pronounced as zeta, which is a damping ratio symbol.

Consider the following conditions to know whether the control system is overdamped or underdamped or critically damped.

Case 1: When ζ>1, both poles are real and negative. Then the system is said to be overdamped.

Case 2: When ζ = 1, both poles are equal, real and negative. Hence the system is damped critically. Since s = -ωn

Case 3: For 0 < ζ < 1, the poles are negative real with complex conjugates. In this case, the control system is said to be underdamped.

Case 4: The poles are imaginary and complex conjugates at ζ = 1. Here s= +/-jωn. Therefore the system is considered undamped.

Case 5: The system is considered unstable only when ζ < 0. Both poles are located at the right half of the Laplace plane.

The graphical representation of damping frequency and damping ratio ζ is shown below. 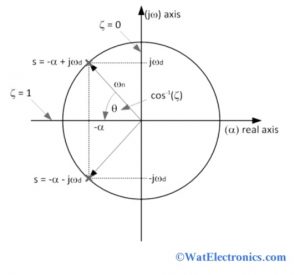 The significance of the damping ratio includes the following.

The percentage overshoot is the output value that exceeds the final steady-state value.

The produced damping ratio with the given PO (percentage overshoot) can be calculated with the below formula.

The oscillatory behavior of the system depends on the damping ratio.

Please refer to this link to know more about Synchroscope.