You are here: Home / Electronics / What is an Anemometer : Working & Its Applications

The first mechanical anemometer is invented by Leon Battista Alberti, who was an Italian artist and an architect in the year 1450. Later on, many changes are made and invented different types of anemometers to measure wind speed and pressure more accurately. The design and its working principle didn’t change over hundreds of years. It is a meteorological device that can estimate whether conditions. These are used in many applications like monitoring the weather conditions, measure the air pressure, measures the velocity, and speed of the wind measures the speed of the airflow, etc. For example, The laser types are used by aerospace engineers, and physicists to measure the speed of the wind around vehicles, and airplanes. This article gives a brief description of the anemometer and its working. 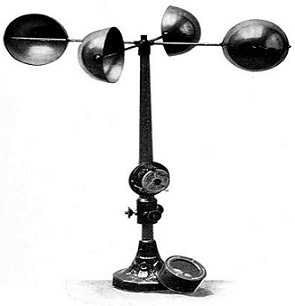 What is the Purpose of an Anemometer?

The purpose of the anemometer is to monitor weather conditions. So, it is used as a weather monitoring instrument. The rate at which the change in the direction of the wind can be measured by using velocity type.

Another purpose of the anemometer is, it is used to estimate the climatic conditions and gives the information about the wind speed and direction. So, it is also known as a climate checking instrument. The basic anemometer diagram is shown below. It is a cup-type, which is the most widely used by researchers and physicists.

The working principle of hot-wire type depends on the rate of airflow, that cools the heated object. That means the speed of the airflow measures the rate of cooling. The wire, which is heated electrically is placed in the airflow gets cooled down due to the increase in the flow of air. In order to maintain the temperature of the wire constant, the power should be increased.

The input power given to the hot-wire is utilized for the measurement of airspeed. Then the digital meter connected to the electronic circuit calibrates the speed of the air. And also time taken to cool the hot-wire is noted and the air current is calculated. Generally, this type is used for measurement low speeds of the airflow.

The most commonly used anemometer is the cup-type and the different types of anemometers working are explained below.

It is designed by using 3-4 cups of cylindrical in shape. These cups are attached to the horizontal arms with the help of a vertical rod to rotate around the axis centrally. A shaft placed inside the axis will spin the cups. When the speed of the wind increases, the cups spinning faster, as well as the shaft, rotates quickly. To calculate the speed of the wind blow, the no.of rotations are counted and calibrated on a digital or analog wind meter.

Similarly, windmill anemometer also measures the speed of the wind based on the revolutions counted. Windmill types are also known as vane type or propeller type.

This is also known as thermal flow type or constant current type, which has an ability to measure both pressure and speed of the wind. Its working is based on the rate of cooling the hot-wire. When the thin hot-wire, which is electrically heated is placed in the wind, it gets cooled gradually. The amount of power given to heat the wire is used to calculate the speed of the wind.

If the speed of the wind is high, then more input power is required to maintain the wire at a constant temperature. The wind speed is calculated at the rate at which the hot-wire gets cooled down with respect to wind flow. These types are sensitive and mainly used in low wind speed measurements.

Other types of anemometers are used to calculate and measure the speed of the sound waves.

The instrument that measures the wind pressure, wind speed, and temperature of the air is known as Anemometer. It can also be utilized during the HVAC installation of air conditioners to measure the airflow. Depending on the type of measurement, the anemometers are classified into the following types listed below.

For measurement of the velocity of wind, the velocity anemometer is used. It is again divided into 6 types. They are,

The advantages of Anemometer are

The disadvantages of anemometer are

The applications of anemometer are

Thus, this is all about the Anemometer – definition, diagram, purpose, types, advantages, disadvantages, and applications. The anemometer is used as a wind meter to measure the velocity, speed, pressure, direction of winds. Here is a question for you, “What are the advantages of Hot-wire anemometer? “