You are here: Home / Components / What is a Freewheeling Diode : Circuit & Its Working

When the switching element is deactivated then the load can be short-circuited. So the stored energy within the magnetic field of the load can be dissipated like heat. A semiconductor device like a diode is made with two semiconductor materials like P-type and N-type. It works in a forward-biased state once the applied potential surpasses the barrier potential so it works like a closed switch whereas in a reverse-biased state, the diode will not work, so acts as an open switch.

What is a Freewheeling Diode or Flyback Diode?

Generally, a flyback diode or freewheeling diode is one kind of diode and it is used across the terminals of inductive load to avoid the high voltage across the switch. This kind of diode is used to guard the circuit against abnormal damage that occurred because of the sudden decrease within the flow of current throughout the circuit. A freewheeling diode is also called a kickback, clamp, commutating, snubber otherwise suppression diode.

A freewheeling diode is connected in motor control circuits across the terminals of the motor to let for energy dissipation stored in motor inductance to give continuity of motor current once the silicon-controlled rectifiers are blocked. This diode also gives protection against high voltages.

The main function of a freewheeling diode is to freewheel the energy stored within the inductor by giving a short circuit lane. This is essential otherwise an unexpected decay within circuit current will increase the voltage across the diode & switch contacts. The operating of this diode can be done only in forward bias but not in reverse bias.

Once an inductance carries a current, then the energy stored within the magnetic field is given through the following equation.

From the above equation, ‘W’ is a magnetic field, ‘L’ is an inductor and ‘I’ is current.

If the supply in an inductor ‘L’ is provided through a mechanical switch then it can be controlled by open the switch to zero immediately. The energy stored within the magnetic field can be dissipated in the form of a spark beyond the switch contacts.

This voltage comes into view beyond the switch terminals. If this appeared voltage is high then a curve appears & lets the flow of current continuously until the energy stored in the magnetic field can be dissipated like heat within the arc.

Sparking beyond a switch does not cause instant damage, however once a switching component such as IGBT, SCR is used then unexpected breakdown can be occurred until unless some steps are used to dissolve the energy stored. So this can be attained through a freewheel diode or flyback diode.

For a better understanding of the freewheeling diode working, let us consider the following circuit. When the switch (S) is closed in the circuit, current (I) flows throughout the circuit (V/R). Therefore, the stored energy within the inductor is (LI2)/2.

Once this switch is not closed, then the flow of current will decay unexpectedly to zero from the stable value I = (V/R). Because of this unexpected decay of current, a high reverse voltage equivalent to L (di/dt) will come into view across the terminals of the inductor & the switch & diode. 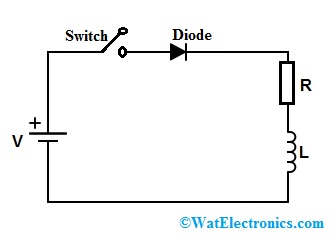 This will lead to flashing across the contacts of the switch. If this reverse voltage surpasses the Peak Inverse Voltage (PIV) of the diode, then there is a chance to get damage. To keep away from such incidences, a freewheeling diode (flyback diode) is allied across the inductive load.

To understand the freelancing diode in the above circuit in a better way and how they avoid sudden overvoltage occurrences, let us discuss the working principle of this diode using the above circuit.

Circuit Working through a Switch

In the above circuit, the connection of load like RL can be done to the DC source throughout the switch & diode. When the switch in the circuit is closed for few seconds, then current flows throughout the load. This current builds up within the inductor to reach its stable value after some time.

So stable or final current value is I = V/R.

Once the switch is opened, there is no flow of current within the circuit that tends to decay throughout the inductive load. This breakdown current throughout the inductor (L) results in a reverse voltage development that is equivalent to L (di/dt) beyond the terminals of an inductor.

This reverse voltage beyond the terminal of the inductor will make the diode forward biased. So it acts like a closed switch. Therefore, the main circuit can be changed to another circuit including a freewheeling diode, resistor & inductor as shown below. In this circuit, the flow of current will decay exponentially to zero that as shown below.

Therefore, the diode used in the circuit will dissipate the stored energy within the inductor by giving a short circuit lane so that high voltage cannot be induced. So, the diode & switch is protected from excessive voltage.

The effect of a freewheeling diode is, normally the connection of this diode can be done across an inductive load like a solenoid or a relay. Once the drive circuit is released, the energy which is stored within the magnetic field has to leave anywhere.

When this diode is not connected or used, an excessive voltage will be generated beyond the inductor, so there is a chance to damage the driving circuit, so a freewheeling diode is used to provide a lane to this energy.

The advantages of a freewheeling diode include the following.

The applications of freewheeling diode include the following.

Thus, this is all about an overview of a freewheeling or flyback diode, circuit, working, and its applications. When designing switching circuits for inductive loads, we need to take care of high voltage spikes. Here, switching inductive loads are relays, motors, solenoids, and transformers, etc. Without the right circuit protection fixed in your circuit design, the switches would be damaged seriously & may cause circuit failure. To overcome this, the freewheeling diode is used. Here is a question for you, what are the alternate names of freewheeling diode?