You are here: Home / Basics / What is Peak Inverse Voltage & Its Importance

In electronics engineering, different kinds of materials are used to carry electricity. The materials like copper, aluminum, germanium Ge), silicon (si) are good conductors of electricity and have good conductivity. Such materials are called semiconductors, used in various electronic applications. These types of materials have a narrow forbidden gap of 1eV, sufficient to transfer the electrons from the valance band to the conduction band. When two types of materials like p-type and n-type are combined chemically with a fabrication method, then a p-n junction is formed. This p-n junction forms a semiconductor device called a diode. Mostly it is made up of silicon because of its good conductivity. Hence it is also called a silicon diode. It is mainly applicable for rectifier circuits. The article is about a peak inverse voltage, which gives the peak voltage rating of a silicon diode.

What is Peak Inverse Voltage?

Peak inverse voltage is also referred to as reverse breakdown voltage or peak reverse voltage, which is defined as the maximum reverse voltage that a diode or PN-junction can withstand in a non-conducting state or reverse bias condition before breakdown. If this voltage exceeds, the diode might get damaged. This maximum voltage can block the rectifier or diode in a given circuit. The value of PIV for the diode is the specified value that should be mentioned by the manufacturers in the datasheet.

PIV in the Diode 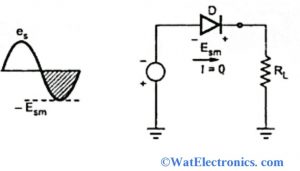 In the half-wave rectifier, the load current will be zero when the diode is in a non-conducting state or reverse bias condition. Thus the maximum value of the voltage that exists across the diode is Esm.

At the reverse bias condition of the diode, the PIV of silicon diode occurs at the peak value of each negative half cycle of the input. The peak inverse voltage formula is given as,

This is also known as the PIV rating of the diode. According to the desired circuit specifications and PIV rating, the diode must be selected for the operation. 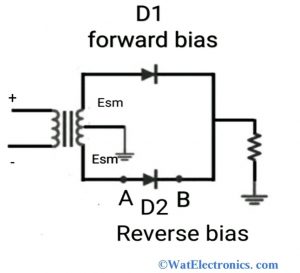 Hence, the PIV or breakdown reverse voltage is the peak value of the reverse voltage to which the diode gets subjected to the secondary winding of the transformer. Let point A be the -Esm and point B be the +Esm with respect to ground. Neglect the voltage drop of the diode D1

Where Esm= maximum value of the AC voltage across the half of the secondary winding of the transformer.
If the drop across the diode is assumed as 0.7V the PIV of the reverse-biased diode is given as,

The above formula is used because only one diode conducts at a time.

If the PIV exceeds across the junction of the diode in reverse bias condition beyond the specified PIV rating, then the junction gets damaged or breakdown occurs.

Thus, this is all about an overview of an important characteristic of the diode, which is peak inverse voltage of diode -definition, formula, calculation, and importance. Here is a question for you, “What is the PIV rating of the rectifier circuit? “