You are here: Home / Components / Basics of SCR : Construction, Working & Its Applications

The electric name of Silicon controlled or the semiconductor controlled rectifier (SCR) is Thyristor. These are the four-layered semiconductor devices where three terminals are known as the anode, the cathode, and the gate. Based on the triggering applied at the gate the device can be treated as a switch or used as a rectifier. These SCRs are unfit for amplifications. SCRs are responsible for conducting the flow of current in a single direction. Hence it is also a unidirectional device. It consists of three junctions in it.  These are the devices that operate based on the currents. Hence these are referred to as current-controlled devices. These are very useful for the control of the devices when the AC supply is termed too high, to provide control for the lamps, and for providing the control over the phase, the motors that are of AC type.

What is a Silicon Controlled Rectifier (SCR)?

Definition: A solid state-operated device with a four-layered structure, its flow of current in the one direction just like a diode where it has three junctions along with the three terminals. These devices are defined as silicon-controlled rectifiers (SCR). The other name for this is Thyristor.  These are the devices that are operated with the current. A large value of the current at the anode terminal is controlled by the value of the current applied at the terminal gate. Hence these are the current-controlled devices. 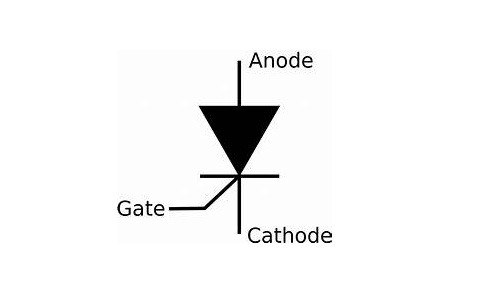 An SCR is constructed with the four layers that consist of the P-type and the N-type semiconductor material. These are layered in such a way that it tends to form three junctions that are J1, J2, and J3. The three terminals that are attached to it are known as anode, cathode, and gate. The anode is the basic terminal through which the current flows or enters the device. Where the cathode is the terminal through which the entered current leaves the device. 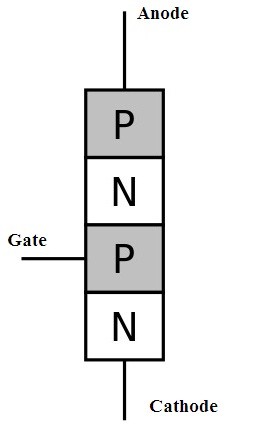 The basic working principle in the SCR is that as the triggering or the biasing is applied at the terminal gate then the conduction begins. As it is a unidirectional device the current will be in a single direction. It resembles the operation of the diode but the only difference is that this can withstand the high amount of voltages and powers.

SCR triggering is a method of making the device turn ON. It needs to be applied with a sufficient amount of biasing to the terminal gate. Hence it is known as SCR triggering or Thyristor triggering. Finally as the device moves to the ON state or the conducting state, the maximum amount of the current flows through the terminal anode. There are various types of triggering in SCR involved. They are:

As the value of the forward voltage exceeds the maximum point that is the forward break over voltage and the terminal gate is left open in this situation. This type of triggering in the Thyristor or SCR is known as voltage triggering. But this is usually not preferred because SCRs are related to control the high values of the voltages if the gate terminal is kept open it can’t meet the requirements and results in the destruction of the device.

This triggering happens when the temperature in the device is increased. This increase results in the increment of the hole and the electron pairs. Indirectly the current known as regenerative current tends to increase by making the device turn ON. This kind of triggering is not preferred because of the thermal heat condition there are the chances of thermal runaway.

In this type of triggering, the light rays are made to fall on the surfaces of the Thyristors so that the number of the electron and the hole pairs tend to get multiplied in number. Hence the Thyristor made to turn ON.

If the rate of the voltage in between the terminals anode to the respective cathode is high in such cases this rate of voltage is enough to turn ON the Thyristor. But the increment in the rate of the current may destroy the device. Hence in this case of triggering protection must be provided for the device.

This type of triggering is most frequently used. In this case, the gate terminal is triggered so that base on it the Thyristor can turn ON. As the device gets turned ON the control of the gate terminal over the device is lost. The reason behind losing control is that the regeneration of the charge carriers.

These are some of the methods involved in triggering the Thyristors.

The applications of SCR include the following.

Please refer to this link to know more about SCR Commutation MCQs.

The above are some of the basic applications where SCRs are installed.  In this way, the basic functionality of the Thyristor differs because of its one-way conduction resemblance to a diode and the quality of rectification.  These are good at controlling the higher rating value of the devices in terms of power and voltage.  Easy and simple in construct. Hence these devices can be connected in the various circuits where the controlling of the power units is required for example AC motors. Now can you tell what makes the Thyristor so unique in terms of construction?