You are here: Home / Articles / What is Crystal Oscillator Circuit and its Working? 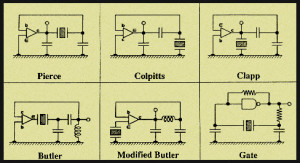 What is Crystal Oscillator?

The quartz crystal oscillator circuit diagram can be represented as follows: 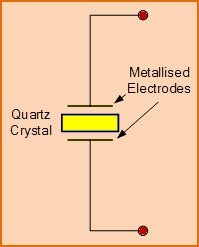 The above diagram represents the electronic symbol for a piezoelectric crystal resonator which consists of two metalized electrodes and quartz crystal. 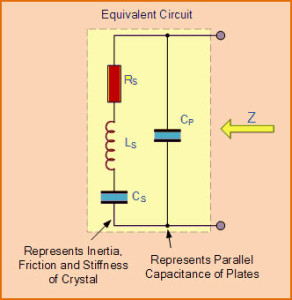 The above figure shows the equivalent circuit diagram of quartz crystal in an electronic oscillator that consists of resistor, inductor, and capacitors which are connected as shown in the figure.

The atoms, molecules, ions are packed in an order in three spatial dimensions with repeating pattern to form a solid that can be called as a crystal. The crystal can be made by almost any object that is made of elastic material by using appropriate electrical transducers. As every object consists of natural resonant frequency of vibration, steel consists of high speed of sound and is also very elastic.

Crystal oscillator circuit works on the principle of the inverse piezoelectric effect, i.e., a mechanical deformation is produced by applying an electric field across certain materials. Thus, it utilizes the vibrating crystal’s mechanical resonance which is made of a piezoelectric material for generating an electrical signal of a specific frequency.

The quartz crystal oscillator circuit diagram consists of series resonance and parallel resonance, i.e., two resonant frequencies. If the reactance produced by capacitance C1 is equal and opposite to the reactance produced by inductance L1, then the series resonance occurs. The series and parallel resonant frequencies are represented by fs and fp respectively, and the values of fs and fp can be determined by using the following equations shown in the figure below. 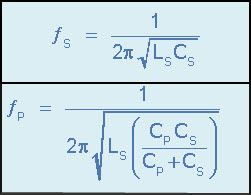 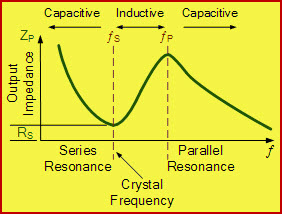 Use of Crystal Oscillator

Application of Crystal Oscillator in Military and Aerospace

The use of crystal oscillator in military and aerospace, is to establish an efficient communication system, for the navigation purpose, electronic warfare, in the guidance systems, and so on.

Use of Crystal Oscillator in Research and Measurement

The crystal oscillator is used in research and measurement for celestrial navigation, space tracking purpose, in the measuring instruments and medical devices, and so on.

There are a huge number of industrial applications of crystal oscillator such as in computers, digital systems, instrumentation, phase locked loop systems, marine, modems, sensors, telecommunications, disk drives, and so on.

Use of Crystal Oscillator in Automotive

Crystal oscillator is used for engine controlling, stereo, clock and to trip computer, and in GPS system.

Crystal oscillators are used in many consumer goods such as cable television systems, personal computers, video cameras, toys and video games, radio systems, cellular phones, and so on.

Do you know the types of crystal oscillator circuits? Furthermore, technical assistance can be provided based on your comments posted in the comments below.