You are here: Home / Components / What is a Crystal Diode : Construction & Its Working

A diode is a semiconductor device through which current supplies in one direction only. The initial diodes were crystal diodes which are used as rectifiers in radio kits. In this diode, a weak signal was fed into the crystal material using a very fine wire namely the cat’s whisker.

The crystal material in the diode removes the high-frequency carrier signal of radio by allowing the elements of the signal through the audio data to approach through clear. The crystal material was packed with impurities so that some sections will become more resistant to the flow of current. This article discusses an overview of a crystal diode.

What is a Crystal Diode?

A crystal diode is also called a Cat’s whisker because it is a type of point-contact diode. This diode operation mainly depends on the contact’s force among the point & semiconductor crystal. This diode includes a metal wire that is pressed next to the semiconductor crystal. Here, the crystal acts works like a cathode & metal wire acts as an anode. These types of diodes are outdated within nature and used in detectors, microwave receivers, and rectifiers. The crystal diode symbol is shown below.

Here, crystals are more popular semiconductors, so semiconductor materials are frequently known as crystals. This is how crystal triodes & diodes are named. These diodes are available in different types like common diodes which are mainly used for switching, rectifying, detecting, etc, and diodes including particular properties like voltage stabilizing, LEDs, photosensitive, etc.

A crystal diode is designed with two dissimilar kinds of semiconductor materials beside the other. In this diode, one side is simple to flow the electrons whereas another side is not easy. But electrons try to jump from one side to the other across the border to form a current and nothing will take place. The alternating current which comes from outside can change by the diode to the direct current that most appliances require. 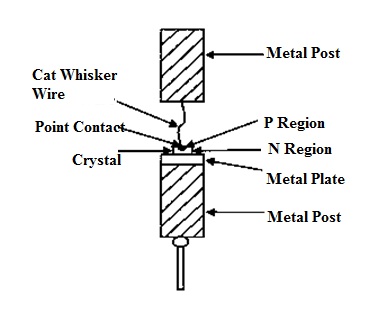 Generally, these diodes are also called point contact diodes which are the old type microwave semiconductor devices. These were mainly designed for utilizing in microwave receivers & at present, they are still used like detectors & receiver mixers. As compared to PN junction diode, crystal diodes mainly depend on the contact force among a semiconductor crystal & the point for its action.

Throughout this diode manufacturing, the huge current is supplied from the cat whisker to the Si crystal. The outcome of this huge current will form a small p-type material region in the region of the crystal within the surrounding area of the point contact so that a PN junction can be formed.

The electric power which is obtained from outside is mainly used for transmission that is AC; however, most of the devices work by using DC supply. As a result, we need to change AC to DC by using a rectifier circuit. Most of the rectifiers employ this diode through some resistors which are called crystal diode rectifiers. These are divided into two types like HWR 0r half-wave rectifier and FWR or full-wave rectifier.

The half-wave rectifier (HWR) conducts current simply in the positive half cycle of the applied input voltage. In this rectifier, the AC supplies negative half cycles are suppressed. As a result, no current will be conducted & no voltage shows beyond the electric load. So flow current always in one direction throughout the load.

In a full-wave rectifier (FWR), the flow of current throughout the load will be in the same direction for both the semi cycles of input AC voltage supply.

This current is a significant parameter to gauge the diode quality. When the value is small then the quality of the diode is better. Generally, the reverse saturation current can be ignored & in the reverse direction, the diode is considered non-conducting.

The advantages of crystal diode include the following.

The disadvantages of crystal diode include the following.

Please refer to this link to know more about Rectifier diode and Laser diode.

Thus, this is all about an overview of crystal diode circuits using a half-wave rectifier, working, characteristics, advantages, and disadvantages. Here is a question for you, what are the applications of crystal diode?