You are here: Home / Basics / What is a Rectifier : Working and Its Applications

A basic diode has various applications it includes rectifiers in it as well. Rectification can be done through the basic diode. It may be current or voltage the AC values will be converted into DC. The basic property of the diode is that it can establish the path for the flow of current in one direction that is possible during forwarding bias. However, during reverse bias, the diode remains in non-conducting mode. It doesn’t participate for the establishment of the path for the flow of current. Hence this made the diode to utilize it for rectification. This article covers the basics of Rectifier, its working theory, functioning, circuit diagram, equations and furthermore its applicstions.

Definition:  A normal diode with its junction formed due to p-type and n-type interaction is utilized for the purpose of conversion of alternating currents into direct currents. This process is referred to as rectification and the respective circuitry designed for rectification is defined as a rectifier.

As the property of diode suggests, whether a diode with the junction as p-n can operate in forwarding bias or block the flow during reverse bias.

As these are the majority charge carriers from both sides. Their movement makes to generate the current that is referred to as forwarding current.

Hence the majority of the charge carriers get attracted towards the respective terminals of the battery. Then the existence of minority carriers makes the presence and the reverse saturation current flows in the circuit.

But the reverse current in the diode is because of the influence of minority charge carriers. So that it can be neglected. Hence these conditions are utilized and make the diode as the part of the application.

These are the basic biasing techniques that make a part of the rectifier theory.

The waveform of AC is not constant it is a variant of time. As it reaches the positive peak value it tends to degrade the same will be followed for the negative value after reaching zero again it will come back to zero lines.

Now let us begin the working of rectifier by applying AC as the input. For the positive half of the cycle, the diode acts in forward bias mode. Hence the path is established for the movement of charge carriers.

Once the negative part of the cycle is applied to the diode it blocks the value of the current because the movement of minority charge carriers in it can be neglected. Simply one can define the working of the diode as conducting in forward bias and blocking in reverse bias to the flow of current.

Hence the flow of current is evident during the positive part of the cycle applied to the diode. The output obtained it must be converted from AC into DC. In this way the basic diode functions as a rectifier.

But these rectifiers generally don’t produce any pure form of DC. It consists of an impure form of AC components in the obtained output. Hence these AC components are referred to as ripples. These ripples can be removed by using a filter connected across the rectified output in order to obtain the smoothening effect. It is said to be maximum efficient if its ripple factor value is at a minimum.

Basically, the rectifier circuits can be classified as

Rectifier Circuit of Half Wave

A half-wave rectifier is a basic circuitry with a single diode used in it. This connected to a series AC supply as well as a series load resistor. It follows the property of the diode by conducting to the positive cycle. This consideration makes this circuitry a simple one to analyze. 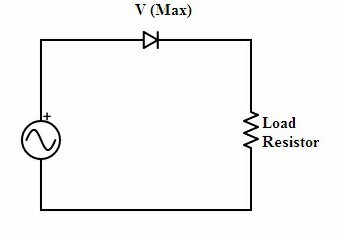 Rectifier Equations of Half Wave Rectifier

The average value of voltage,

The average value of the current can be given as

The value of RMS voltage can be given as

The value of RMS current can be given as

The ripple factor value of half-wave rectifier is

The efficiency value of the rectifier is given as

The form factor value is

The above are some of the rectifier equations that relate to the half-wave rectifier.

A full-wave rectifier can be classified as a center-tapped and bridge rectifier circuits. It is more efficient compared to that of half-wave. It can utilize both the cycles so that the loss in power is minimum.

It consists of a center-tapped transformer with two diodes connected with a resistive load. The positive point of it is that one diode responds during one part of the cycle and the other during another part of the cycle. In this way, there is no loss of the output power. 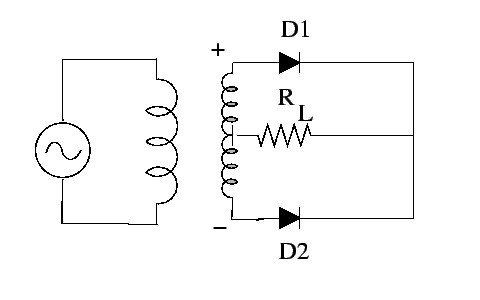 The drawback for this kind of rectifier is that the usage of the center-tapped transformer makes it costly. Hence another circuit referred to as bridge rectifier has been designed.

A rectifier with four diodes connected in such a way that it follows bridge topology referred to a bridge rectifier. It has been drawn to overcome the drawback of the center-tapped rectifier. 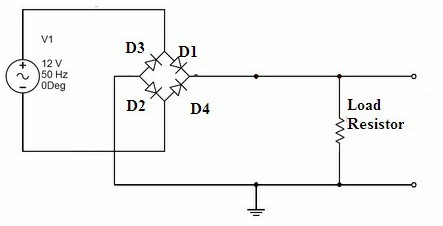 The average value of the voltage can be given as

The average value of the current can be given as

The RMS value of the voltage is given as

The RMS value of the current is given as

The form factor value is

The above are some of the equations of the full-wave rectifier. Furthermore, Rectifier Equations are

The instantaneous value for the signal considered its average for the arithmetic is referred to as the average value of the given rectifier.

Avg.value=(area present under the curve)/( complete value of the base )

2) RMS Value for the Rectifier

It can be referred to as the square root of the respective means.

The heat produced by the AC signal RMS value is the same as that of the flowing DC current of the equal value through similar resistance.

3) Peak Factor of the Rectifier

The ratio between the maximum peak value for the applied signal to the RMS value of the respective signal is referred to as the peak factor.

4) Form Factor of the Rectifier

The ratio of the RMS value of the applied signal to its average value is referred to like the form factor.

It can be defined as the ratio of the AC component’s RMS value to the DC component present at the output.

The final equation for the ripple factor is

6) Efficiency of the Rectifier

The ratio between the generated DC output power to the applied input power gives the efficiency of the respective rectifier.

The basic advantage of the rectifier is that it can convert alternating current into direct current.

Hence the overview for the basic rectifiers is given. It can be the useful part for the application of the power supply unit but it can’t be used in practical applications without applying it to a filter Now can you tell are the rectifiers useful in ADC conversions or any further way is there to convert it?