The electronic circuits used to generate periodic, oscillating signals such as sine waves or square wave,s or triangular wave are known as Oscillators. Oscillators take a DC signal and convert them into the required AC signal. These are used in numerous electronic devices where a clock signal is required. Some of the applications of oscillators are clock generators in calculators, computers, digital clocks, video games, etc… The signals generated by oscillators are also used in radio broadcasting and tuning of audio in TV. These are classified based on their output signal frequency as Low-frequency oscillator, Radio oscillator, and RF oscillator. One such classification of the oscillator is Wein-Bridge Oscillator.

What is Wien Bridge Oscillator?

Wein Bridge Oscillator is an electronic device that generates sine waves. In the year 1891, Max Wein developed a bridge circuit to measure the impedances. William R.Hewlett designed the Wein-Bridge Oscillator using the Wein bridge circuit and the differential amplifier. Here the Wein bridge is connected in a positive feedback loop between the amplifier output and differential inputs. This can also be viewed as a band-pass filter that provides positive feedback connected to a positive gain amplifier. The bridge circuit is composed of four resistors and two capacitors. The bridge is balanced at the oscillating frequency and has a very low transfer ratio.

The component values of both the RC circuits are the same. At the resonant frequency, the phase shift of the signal will be 0 and the circuit will have good stability and low distortions. Besides RC circuits the other two arms of the Weinbridge consist of two more resistors R3, R4. Below is the circuit diagram of a Wein bridge oscillator using OP-Amp. 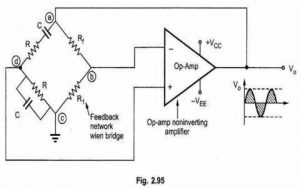 In a Wein bridge oscillator, when lower to higher frequencies are applied, at a particular frequency, the value of resistance and capacitor reactance becomes equal to each other. At this point, the maximum output voltage is observed. This frequency where maximum voltage is derived is known as the “Resonance Frequency” of the Wein bridge oscillator and is denoted as fr.
The formula for the calculation of resonant frequency is as follows

fr = 1/2πRC
At the resonant frequency, the phase shift between input and output will be zero. The magnitude of the output voltage will be one-third of the input voltage.

The output of the op-amp is given as input to the bridge circuit from points a and c. The output from the bridge is derived from points b and d and given as input to the op-amp. A portion of the amplifier output is feedback to the positive or non-inverting terminal of the op-amp through the voltage divider circuit, formed by the series combination of resistor and capacitor. Another portion of the output is feedback to the negative or inverting terminal of the op-amp, through the impedance of 2R magnitude. 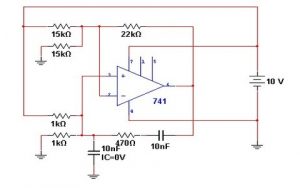 To have sustained oscillations the total loop gain of the oscillator must be maintained at value 1. So, automatic gain control is required for a feedback oscillator. To achieve this a Zener diode is placed in the feedback network in parallel with resistance R3. When the output voltage reaches the Zener breakdown voltage level, the Zener diode starts conducting.

This will short circuit the resistor R3, which decreases the amplifier gain to 3 and maintains the total loop gain at 1. This method of gain control is easy but it suffers from the non-linearity of the Zener diode which inturn causes distortion in sine waves.

To overcome the limitation, JFET is placed in the negative feedback path. This JFET acts as a voltage-controlled resistance. By using JFET for automatic gain control, a stable sinusoidal waveform can be produced.

Some of the advantages of the Wein-bridge oscillator are given below.

Some of the disadvantages of the Wein bridge oscillator are given below.

Some of the applications of the Wein bridge oscillator as given below.

Besides the use of an op-amp for the amplifier, Wein bridge oscillators are also constructed using transistor circuits. The various implementations of this oscillator are limited by the automatic gain control as well as the limitation of its output amplitude caused due to intentional and non-intentional linearity. What total loop gain must be maintained for the proper working of the Wien bridge oscillator?