You are here: Home / Electronics / What is Band Pass Filter : Circuit & Its Working

During signal processing, a device called a Band Pass Filter or BPF is needed to allow a particular range of required frequencies and to avoid unwanted frequency ranges or components. By this filtering noise signal can be reduced by eliminating frequencies that are not required. Different types of filters like linear and nonlinear, analog, digital, active and passive, etc. are available to use based on the requirement. This article discusses an overview of Band Pass Filter.

What is Band Pass Filter?

This bandpass filter only allows the particular band and attenuates all the remaining signals above or below that cut off frequencies.

This is the circuit diagram of the RC passive bandpass filter.

To be an ideal bandpass filter, the filter has to filter or attenuate certain frequencies that even lies within the band because to eliminate noise. Bandpass filters are also known as second-order filters due to the factor that there exist two capacitors, reactive components within the single circuit. One capacitor in the high pass circuit and another capacitor in the low pass circuit.

These bandpass filters are mainly categorized into two types of filters. They are

Here in this diagram, a narrow bandpass filter employing multiple feedbacks is shown. Only one OP-Amp is employed in this filter. Compare to other filters, this filter has some unique features which are very useful. 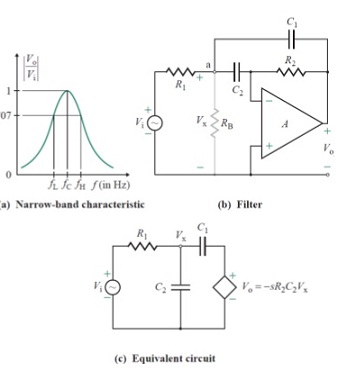 For the calculation purpose

Here the gain at center frequency is defined as Af

Fc can be changed to fc’ without changing bandwidth or gain .this can be formed by simply changing R2 to R2’

This is the passive bandpass filter circuit and the bandpass calculations can be done through this circuit.

By using the formula we can find out the required frequency in this passive bandpass filter.

The bandpass filter has a wide range of applications