You are here: Home / Basics / What is Varistor : Working Principle, Construction and Its Applications

A resistor is an electric component that is used to limit the flow of current in an electric circuit. It is basically a resistive component. It has two terminals and is used in almost all electric circuits. It can also be sued to adjust signal levels and terminate transmission lines. There are different types of resistors available each meant for a specific purpose. A varistor is one such type of resistor, used to change the resistance in the circuit by changing the voltage. Its design is almost similar to that of a capacitor. These are generally of two types which are metal oxide and silicon carbide.

A varistor is a type of resistor in which we can alter the resistance by altering the applied voltage. It is also called a voltage-dependent resistor. It is a nonlinear semiconductor device. The word is derived from the words variable resistor. These are generally used as safety devices to prevent excess transient voltage in the circuit so that the components of the circuits remain protected. It even controls the operating conditions of the circuit. The design of this component is just the same as that of a normal capacitor.

The IEEE symbol of this is shown below.

The ICE symbol of this is shown below.

A varistor does not obey Ohm’s law and hence it is not like an ohmic resistor. It is basically a non-ohmic resistor that does not follow Ohm’s law and hence it is also called a non-linear resistor or a voltage-dependent resistor. The basic difference between a normal resistor and a voltage-dependent resistor is that would the resistance of a resistor can be altered only by manual action but we can alter the resistance by altering the voltage. The working principle of this is similar to that of a PN junction diode during reverse bias operation.

These are mainly of two types: metal oxide and silicon carbide. The metallic oxide type is the most common type of varistor. This device consists of a matrix of a metal oxide containing a ceramic mass of zinc oxide. Some of the commonly used metals are bismuth, cobalt, and manganese. 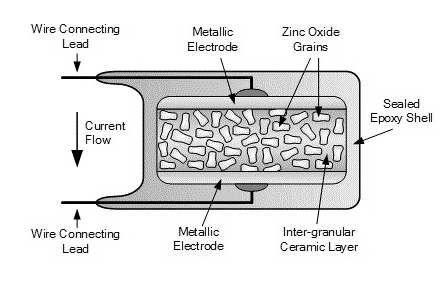 In a normal situation, this does not conduct any current. But when the applied voltage crosses the reverse breakdown voltage, the diode starts to conduct electric current.

The Resistance of a Varistor 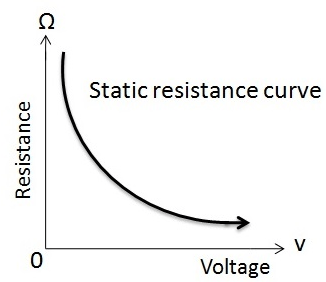 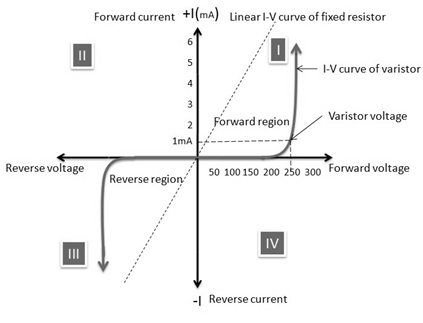 Applications of a Varistor

1). These can be used to protect electrical circuits from excessively high voltage. The following circuit shows how a metal oxide type can be connected to a circuit to protect it from high voltage. 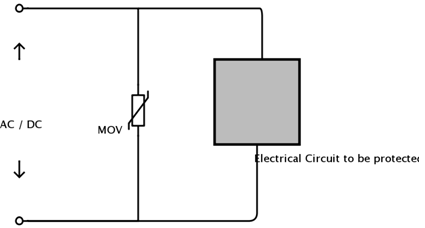 2). The devices connected in an electronic circuit are extremely sensitive to change in voltage. So we use this component in the circuit to protect the different components of the electric circuit. Here, we can see how this can be used to protect a transistor in the circuit. 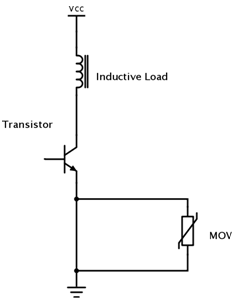 3). It can also be used to provide surge protection in AC and DC motors. 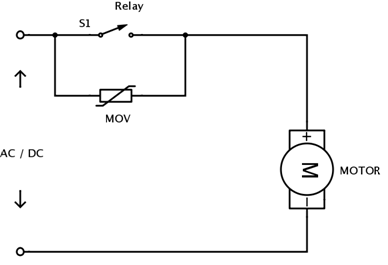 The advantages of Varistors are

The disadvantages of Varistors are

1). Does a varistor have polarity?

In the case of metal oxide varistor, a zinc-oxide layer is basically sandwiched between two metal electrodes. As a result, there is no polarity.

2). What happens when a varistor fails?

This may fail due to two reasons: degradation and catastrophic failure. Catastrophic failure mainly occurs when we do not limit a large surge and the magnitude of the energy is higher than the value which the capacitor can handle. As a result of a failure, non-uniform joule heating may occur in the circuit.

3). What is the varistor voltage?

The voltage generated across the terminals of a varistor when a current of 1mA is allowed to pass through it is called varistor voltage. It is basically the voltage rating.

4). How do you test a metal oxide varistor?

A metal-oxide type can be tested using a multimeter. One probe of this should touche the free varistor lead and the other probe should touch the connected lead.

5). What is the difference between varistor and thermistor?

A varistor is an electric element that has a variable resistance and which can protect an electric circuit against power surges. A thermistor, on the other hand, is a resistor whose resistance varies according to the change in temperature.

Please refer to this link to know more about Surge Protector.