You are here: Home / Basics / What is a Light Dependent Resistor and Its Applications 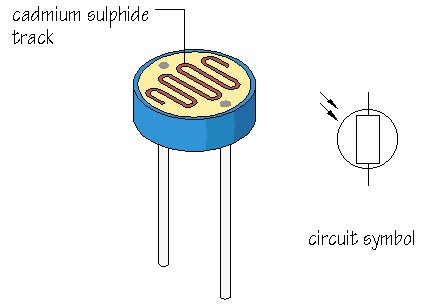 Majority of street lights, outdoor lights, and a number of indoor home appliances are typically operated and maintained manually in many occasions. This is not only risky, however additionally it leads to wastage of power with the negligence of personnel or uncommon circumstances in controlling these electrical appliances ON and OFF. Hence, we can utilize the light sensor circuit for automatic switch OFF the loads based on daylight’s intensity by employing a light sensor. This article discusses in brief about what is a light dependent resistor, how to make a light dependent resistor circuit and its applications.

What is a Light Dependent Resistor?

An LDR or light dependent resistor is also known as photo resistor, photocell, photoconductor. It is a one type of resistor whose resistance varies depending on the amount of light falling on its surface. When the light falls on the resistor, then the resistance changes. These resistors are often used in many circuits where it is required to sense the presence of light. These resistors have a variety of functions and resistance. For instance, when the LDR is in darkness, then it can be used to turn ON a light or to turn OFF a light when it is in the light. A typical light dependent resistor has a resistance in the darkness of 1MOhm, and in the brightness a resistance of a couple of KOhm

This resistor works on the principle of photo conductivity. It is nothing but, when the light falls on its surface, then the material conductivity reduces and also the electrons in the valence band of the device are excited to the conduction band. These photons in the incident light must have energy greater than the band gap of the semiconductor material.This makes the electrons to jump from the valence band to conduction. 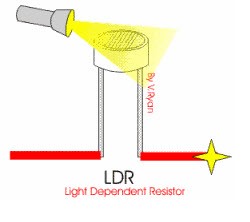 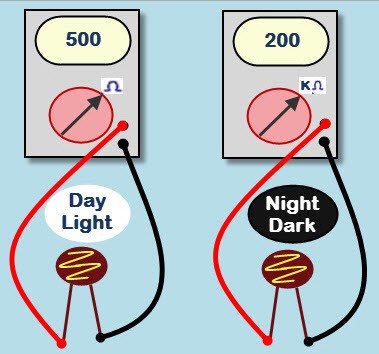 Variation of LDR Resistance with Variation in Light Intensity

If a constant “V’ is applied to the LDR, the intensity of the light increased and current increases. The figure below shows the curve between resistance Vs illumination curve for a particular light dependent resistor. 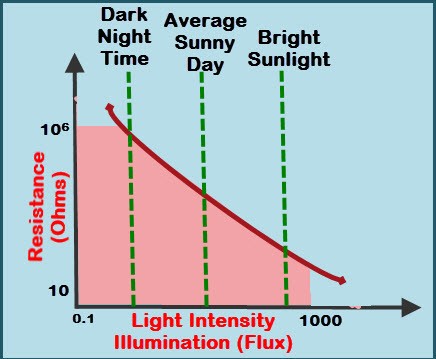 Light dependent resistors are classified based on the materials used.

These resistors are pure semiconductor devices like silicon or germanium. When the light falls on the LDR, then the electrons get excited from the valence band to the conduction band and number of charge carriers increases.

These devices are doped with impurities and these impurities creates a new energy bands above the valence band. These bands are filled with electrons. Hence this decrease the band gap and small amount of energy is required in moving them. These resistors are mainly used for long wavelengths. 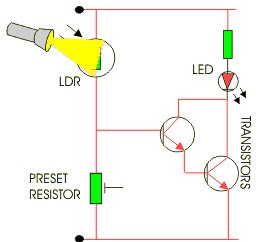 Light dependent resistors have a low cost and simple structure. These resistors are frequently used as light sensors. These resistors are mainly used when there is a need to sense the absence and presence of the light such as burglar alarm circuits, alarm clock, light intensity meters, etc. LDR resistors mainly involves in various electrical and electronic projects. For better understanding of this concept, here we are explaining some real time  projects where the LDR resistors are used.

This security system controlled by an electronic eye project is based on photo sensing arrangement. The proposed system uses a 14-stage ripple carry binary counter to sense the intensity of light using LDR. The o/p makes a relay and buzzer for the required action. This project is very useful to deter burglars from shopping malls, banks and jewelry shops, etc.

This project uses a light dependent resistor. When light falls on the LDR sensor, then the resistance of the sensor decreases, which lead to activate an alarm to give an alert to the user. This project is suitable in the application of providing security system for lockers, cash boxes which can be found in the banks, shopping malls, jewel shops.

The circuit of this project is placed inside of the cash box in shopping malls or inside of the lockers in banks in such a way that, when a burglar opens the cash box or locker and uses a torch light to search the valuables. When the light falls on the circuit which includes an electronic eye and gives a command to the ripple counter. This triggers the alarm and shows a burglary attempt. A lamp is also used to indicate the theft when light falls on the sensor.

In future, this project can be developed by using a GSM modem and also a microcontroller. This modem can be interfaced to send an SMS to the user in case of burglary

In the proposed system, generally the lighting up of highways is done through HID lamps. Because, the energy consumption of these lamps is high. This project uses an LEDs to overcome the drawbacks of HID lamps. This project demonstrates the usage of light emitting diodes as a light source. These lights consumes low power and its life is more as compared to HID lamps.A light depending resistor is used to detect the light. The resistance of the LDR drastically reduces according to the daylight.

A bunch of LEDs are used to make a street light. The microcontroller comprises programmable instructions that controls the light intensity based on the Pulse width modulation signals generated.

The light intensity is kept high during the peak hours, and as the traffic on the highways tend to decrease in late nights: and the light intensity also decreases till morning. Finally, the street lights completely shut down at morning and continues again at evening 6pm

In future, this project can be developed by connecting it with a solar panel, which converts the intensity of the solar into corresponding voltage, and this energy is used to feed the street lights on highways.

Lighting Switch from Sunset to Sunrise

This sunset to sunrise lighting switch is designed to control the light illuminated on the LDR sensor.

Hope, this article provides sufficient information regarding what is a light dependent resistor, types of LDR, working of LDR, and applications of LDR. Furthermore, any doubts regarding light dependent resistor use, please give your feedback by posting your comments in the comment box. Here is a question for you, what is the main role of the preset resistor in the above circuit.

Please refer to this link to know more about difference b/w GSM and CDMA.