You are here: Home / Basics / P-N Junction Diode and Its Biasing

The fundamental unit that evolved because of the same crystal added with acceptor and donor impurities on it. This is highly beneficial because of its features paved the way for the development of modern electronics. This device consists of two terminals but the flow of current will be in a unified direction. The characteristic of this device is tested between the applied voltage and the way current generated in the circuit reacts to it. It can’t be linear but one can determine the relationship between the applied voltage and the circuit current is exponential. This article discusses about P-N Junction Diode theory its Biasing, Forward Bias & Reverse Bias.

A piece of semiconductor with two terminals is referred to as the word Diode. One side of the terminal is added with acceptor impurity and the other is doped accordingly with donor impurity. It is clearly evident that one side is p-type and the other end will be n-type. Hence this type of semiconductor is known as p-n junction diode. The main purpose o this type of device is to facilitate the flow of current in a single direction.

The symbol has been designed in such a way that it has an arrowhead pointing in the direction showcasing the flow of direction of the current. A diode consists of two terminals one side of the terminal is known as anode and another side is for the representation of the cathode.

A diode has two regions that are p-type and n-type where it is operated. But on the condition of the applied voltage, the biasing conditions are classified into three types.

The condition of the p-n junction diode where the device doesn’t have any external supply is known as Zero bias or Unbiased.

Basing on the type of bias the diode working can be explained as follows:

Zero bias is the condition of thermal equilibrium where the number of charge carriers on both the ends is balanced. As there is no external power supply to the diode the electrons diffuse towards p-side and the diffusion of holes is towards n-side resulting in the generation of the electric field because of these charge carriers diffusion. This generated electric field generated by both the carriers tends to oppose each other. Further, there is no movement of the charge carriers in the depletion region. In this way, the diode is worked under zero bias in order to attain the state of thermal equilibrium.

This is the condition in which the p-n junction diode is provided with positive supply because the p-type is connected to the positive terminal of the supply. As there is some majority of charge carriers concentration on both the sides tends to attract at the junction resulting in a decrease of the width of the depletion region. This condition results in the establishment of a low impedance path where the high amount of current flows in the circuit. 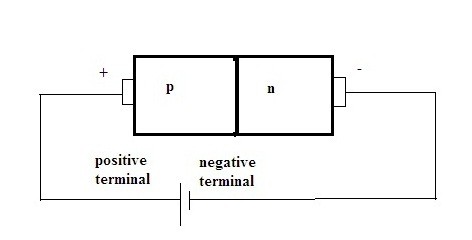 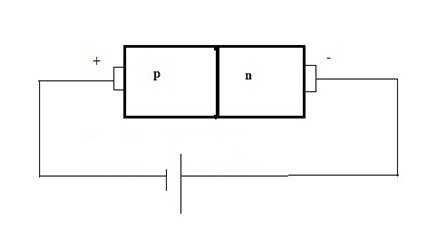 How Voltage and Current are Affected in Various Biasing Conditions?

When the curve is plotted between the voltage across the junction and that influences the flow of charged particles that results in the generation of current in the circuit. This voltage and current curve give the characteristics of the p-n junction formed. The respective voltage and current values get influenced by biasing conditions so based on biasing its characteristics varies

In this type of bias, there is no external supply as there is the presence of barrier potential in this condition no carriers are in the movement because the condition of equilibrium is attained. Then the current flowing through the circuit is zero. Because the external voltage applied is zero.

Once the p-n junction is in forward bias it means that forward voltages are applied. Due to this forward biasing the depletion region present at the junction its width tends to decrease. As the width decreases the impedance becomes low and the path established allows high currents to flow.

Here Is represents the saturation current; VT is the volt-equivalent temperature, and n is the emission coefficient.

Generally, in the reverse bias, the p-n junction will be offering the highest resistance to the flow of current. Still, some amount of leakage current flows through the junction. When the reverse voltage applied is of maximum value then the junction gets overheated due to which the breakdown condition occurs and a maximum flow of current is recognized in the circuit.

There is a very tiny amount of current is flowing through the junction as it is in reverse bias. Hence the equation for it is given as

Equation for Tiny Amount of Current

Whereas Is represents the saturation current; VT is the volt-equivalent temperature, and n is the emission coefficient.

The analysis of the p-n junction diode can be done easily by considering it as a switch. This application of the diode is considered for the experimental setup because of its both biasing conditions execution. 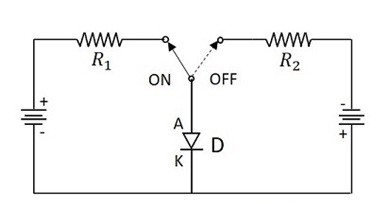 Energy bands are affected based on the biasing techniques applied. The Fermi levels vary when the diode is unbiased as well as it is forward biased or reverse biased.

When the diode is unbiased the state of the junction will be at equilibrium. It indicates that there is no movement in the charge carriers because both p-type and n-type are at the neutral condition. 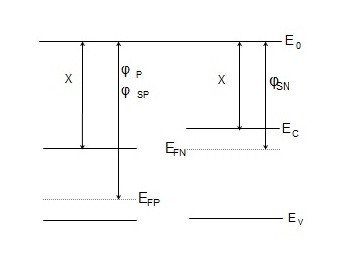 During the forward bias condition, the p-type is connected to the positive side so that it is convenient for the movement of electrons to flow across the junction in order to combine with the vacancy present there near to the junction. 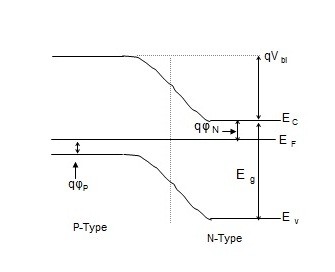 As the diode is in reverse bias it reflects the condition in energy band where the p-side is supplied with negative voltages that reduces the conduction.

The parameters in the p-n junction diode are as follows:

Reverse Saturation Current – when the p-n junction diode is in reverse bias few amounts of current tends to flow through the diode this is because of the influence of minority charge carriers in it. This is defined as the reverse saturation current.

Barrier Voltage – The voltage that is responsible for the opposing of the flow of majority carriers at the p-n junction from both sides that is p-type as well as n-type is known as barrier voltage.

Reverse Breakdown Voltage – The basic minimum voltage applied to the diode when it is in reverse bias so that the behavior of the diode will change from insulator to conductor for some period of time is defined as the reverse breakdown voltage. The above are some of the parameters of the p-n junction diode.

This is all about the p-n junction diode. As it is like a base for modern electronics this concept is utilized in various applications. It’s been used for LED application as well. But for led’s have you ever thought it is operated in which bias?